Accessibility links
A Camera That Can See Straight Through You : The Picture Show The "camera" of Dr. Dain Tasker could see right through you — although he preferred photographing flowers. A collection of his radiographs and X-rays from the vaults of Smithsonian's Photographic History Collection makes its debut online, in a Pi...

A Camera That Can See Straight Through You

A Camera That Can See Straight Through You

When photographers turn their cameras on themselves, they often reference the aesthetic of the work they have produced. And the case of Dain Tasker is no different. His oeuvre was X-raying flowers in the 1930s and 1940s. 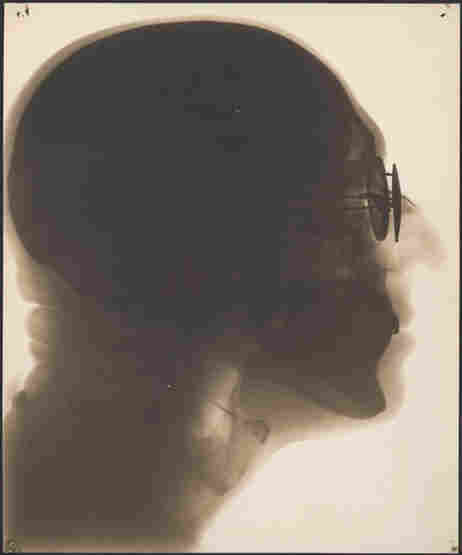 Self-portrait, radiograph, circa 1930s. In this contact print created from X-ray film, you can see the holes created by the film holder. (Dr. Dain L. Tasker) hide caption

Radiologist Dain L. Tasker (1872-1964) turned the camera on himself, looking more than skin-deep. His camera was his X-ray machine at the Wilshire Hospital in Los Angeles, where he was chief radiologist. Above is his self-portrait (undated, but probably from the 1930s). It is a radiograph, a photographic print made from an X-ray.

When looking at the image of Tasker's head, note that not only is the three-dimensionality of his head and neck flattened by virtue of being photographed, but we are also seeing through him. We can see his fleshy nose, his hyoid bone, the veins in his cheeks, and the gap between his frontal lobe and his skull. We can also see his round eyeglasses, the collar stud on the back of his neck that is holding his detachable collar, and the metal loops of his bow tie.

I call Tasker a reluctant photographer. It's not entirely clear why he began X-raying flowers, but perhaps it was as graduation presents for his nursing students. He was not a trained photographer and needed help making prints from his X-rays, so he contacted Will Connell at the Art Center College in Pasadena, Calif. This proved to be a very productive relationship.

Connell, known as a modern pictorialist — and perhaps his own best promoter — was extremely active in California photography circles, teaching, writing, and judging contests. Not only did he print and supervise the printing of Tasker's radiographs, but he also encouraged Tasker to submit them to competitions and helped get the work published in national photography magazines.

And Tasker's ability to set the X-ray machine and exposure to record the subtle differences in plant tissue density in a beautifully modern way was noticed. His most well-known image, of a calla lily, was printed by Ansel Adams and displayed at the Golden Gate International Exposition (1939-40) on Treasure Island in San Francisco Bay. Then, sometime in the 1940s, busy with work and family, it seems that Tasker grew tired of making X-rays of flowers.

Connell left a portion of his collection to the Photographic History Collection at the National Museum of American History. When his wife found a cache of Tasker's materials in her basement, she opened doors at the Smithsonian for Tasker's daughter Olive Frauenberger, who in 1966 donated 385 X-ray films and 245 prints on various papers. The images in this gallery are making their first-ever Web appearance; they include both X-rays and prints made from the X-rays in this collection and date from the 1930s and 1940s.