Accessibility links
The Crusade For Color Photography : The Picture Show Life is in color, so it seems pretty obvious to photograph in color. But that wasn't always the case. Back in the 60s and 70s, color photography was a source of major contention. A new exhibition takes a look at that period in photography.

The Crusade For Color Photography

The Crusade For Color Photography

Life is in color. So it seems pretty obvious to photograph in color, especially nowadays when black-and-white photography seems "classic" — i.e., hopelessly retro. But that wasn't always the case. Back in the '60s and '70s — at least in the art world — color photography was a source of major contention. In the spirit of revolt, or individuality, or just plain curiosity, a few photographers were on a crusade to permit the polychrome. The images below are from a Cincinnati exhibition that reexamines that period in photography.

It's not that color photography was unheard of. It populated the pages of magazines and filled picture frames and wallets. But those were snapshots, not art — so said the critics. Color, on the whole, was deemed kitschy, garish and vulgar. A few small color exhibitions appeared in the early '70s, but the real departure came in 1976, when William Eggleston showed his color work at the Museum of Modern Art. It was the first time the museum had dedicated a solo show to color photography — and it did not go over well.

Fortunately, Eggleston was by no means the only photographer using color, nor was he its only advocate. Stephen Shore, Helen Levitt, Joel Meyerowitz and many others were challenging the confines of art photography. And it wasn't just the type of film they were using, but also the things they chose to photograph that were contentious: lurid roadside ephemera, candid street scenes of everyday life, ostensibly uncomposed and random "snapshots." Of course, photographers like Garry Winogrand and Robert Frank had been doing similar things — but at least their work was grayscale.

Starburst: Color Photography in America 1970-1980, a new exhibition at the Cincinnati Art Museum, is the first survey of this period in photographic history. It showcases more than 200 photographs by 18 photographers. The name seems a bit hokey, but curator Kevin Moore explains it in the exhibition catalog:

As any astronomer can tell you, a starburst is an intensely destructive and creative environment, caused by a collision or close encounter between two or more galaxies, resulting in the formation of stars. 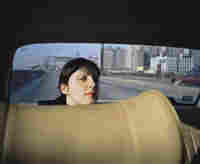 It's a timely exhibition; just last year, Kodak retired its celebrated Kodachrome, the film most frequently used by color photographers over the past few decades. Another exhibition, Pioneers of Color, which features the work of Shore, Meyerowitz and Eggleston specifically, will also open Thursday at the Edwynn Houk Gallery in New York City.

To this day, the debate over color or monochrome — i.e., which is superior — continues. This week, The Picture Show will showcase the work of color master Joel Sternfeld, as well as the classic black-and-white photography of Rodney Smith. And check out yesterday's article on National Geographic photographer Steve McCurry; when Kodak decided to retire Kodachrome, they gave the very last roll to McCurry. That's how good he is.

Stay tuned to see the conversation unfold, and leave your comments. What do you prefer: the world of Kansas or the world of Oz?