Accessibility links
What's That Photo On The iPad? : The Picture Show There's been plenty of hubbub about Apple's new iPad. But have you wondered what that photo is on the screen?

What's That Photo On The iPad?

What's That Photo On The iPad? 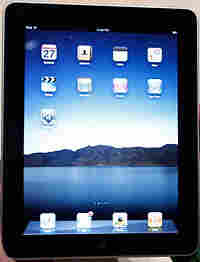 There has been sufficient coverage of the new iPad — what it offers and/or doesn't offer, how perhaps it's Apple's latest attempt to reach its female demographic.

But let's get real, photophiles. We all just want to know one thing: What's that photo on the iPad screen? Far from stock art, it's actually a photograph by artist Richard Misrach. 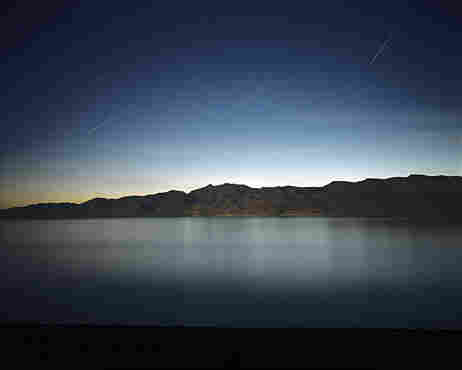 According to ARTINFO, the photograph ...

... is part of a series on the American desert that Misrach has been working on for 35 years. "It's a long night exposure, where the moon is lighting up the mountains in the distance," he says. "I shot it on an 8x10 camera, so the quality is really beautiful, and you can see star trails going through the sky."

The article states that Misrach was watching a movie when he heard the news that his photo had gone global.

Misrach, a sought-after San Francisco artist whose work has been shown in galleries around the world, says that Apple first contacted him some time ago and asked to see about 10 images from his different series, but the company rejected them. Then two weeks ago, on the night of the opening of his current show at Chelsea's Pace/MacGill Gallery, he received an e-mail from the company saying it had reconsidered and wanted to license Pyramid Lake (at Night), a 2004 photo he took at a Native American reservation in Nevada. Terms were set for a five-year exclusive deal, with the company saying they would use the image for screen-savers and other features.

Richard Misrach has been at the forefront of the large-format and color photography renaissance. A major theme of his work is man's interaction with the environment. If you're in New York City, you can check out an exhibition of his work at Pace/MacGill Gallery.