In making the portraits I wanted to look into the face of a young person who had seen something unforgettable. In collaboration with curator Susan Reynolds, I created the Soldier Billboard Project in order to encourage a dialogue about art and soldiering. Viewers are asked to think about the psychological struggles of veterans and their families, and reach their own conclusions.

Suzanne Opton is a photographer based in New York City, and a recipient of the 2009 John Simon Guggenheim Fellowship. Her portraits of American soldiers between tours of duty in Iraq and Afghanistan will be on view in Washington, D.C. metro stations from March 9 to April 4. For more information, or to comment on the images, visit www.soldiersface.com. You can view more of her work on her Web site. 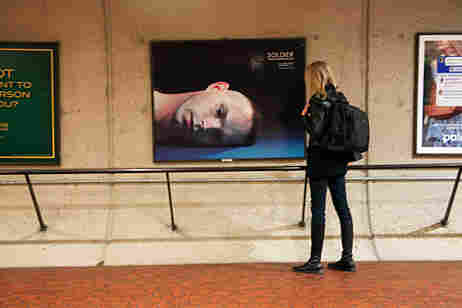 "100 Words" is a series in which photographers describe their work--in their words. What makes them tick? What makes a great photo? Film or digital? Positive or negative? Find out here. Curated by Graham Letorney