"If you see photographs of African-Americans today, you don't see a lot of positive imagery," photographer Sarah Hoskins said in a phone conversation. "You see Obama, people being arrested and athletes." She has made it her mission to change that.

"I'm not an objective observer," she admitted. That's the last thing a photojournalist would want to say. But in this case, "subjectivity" has worked in Hoskins' favor.

She has spent the past 10 years on a personal photo project, which she keeps finding reasons to perpetuate — even without funding. Throughout the process she has fallen in love with — and become an active part of — the culture she's been documenting: small communities of descendants of freed slaves, in hamlets of Kentucky's inner Bluegrass Region.

An exhibition of photos from Hoskins' long-term documentary project just opened at The Art Museum at the University of Kentucky, where she will also give a lecture later this month.

For Hoskins, the story began almost accidentally, back in 2000, when she was covering a story about horse farms for The Backstretch — a publication about animal racing. The assignment brought her to the African-American hamlets around Lexington, Ky.

Fast-forward a decade later, and she's still photographing that region. "African-American history has been so neglected in this country in writing and photography," Hoskins was once quoted in American Legacy magazine. "I'm hoping my photographs will help show that we've got to hurry before it's just too late."

As Hoskins explained, "They were a result of slavery. These communities sprang up because they were trying to keep their labor force." What was for decades a world of hog farming, tobacco growing and church-centered activity is now a lot less agrarian — but still strong in identity. Nevertheless, her project is time-sensitive. Not only are some of these communities disappearing in the face of suburbanization, but the oldest generation is also passing away — some of whom are actually children of freed slaves.

"I'm not a historian, I'm not an academic," she said. But it's hard to deny the historic significance of her project. Although some studies have been done in the region, Hoskins has a unique perspective: a longitudinal audio-visual record of this American subculture. 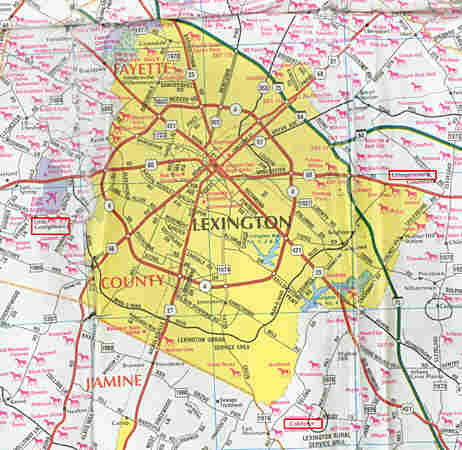 The map used by Hoskins to navigate the area around Lexington, with a few key hamlets in red. hide caption

"I started by standing on a road with a map," she said. According to Hoskins, existing research proposed that there were about 28 of these African-American hamlets in the regions outlying Lexington. Having navigated curvy back road after back road, though, Hoskins has found about 40, which she calls generally "the homeplace" — also the name of her project.

These are the microcommunities (usually numbering no more than 40 families, and in some cases, as few as two) that up to six generations have called home. They're also a home away from home for Chicago-based Hoskins, who spends most of her weekends driving back and forth to document weddings, funerals, births and celebrations — not as a voyeur, but as a participant.

She writes in an introduction to her photo series:

My project is a tribute to the residents of these hamlets, a salute to the elders who learned of slavery at their grandparents' knees, endured the Jim Crow South, who lived "separate but equal" and saw ... desegregation, social segregation, and ultimately the election of Barack Obama.

Although there is still much more to document, there is already a wealth of oral history inscribed on Hoskins' tapes, and a visual record on hundreds of negatives waiting to be printed.

With what seems to be little support from the photography community, Hoskins has received some funding from the Rosenwald Initiative, a subsidiary of the National Trust for Historic Preservation.

This gallery provides a small cross section of the 10-year oeuvre still in progress.