Accessibility links
More Than One Universe? Bring 'Em On! : The Picture Show Imagine if the laws of nature not only allow the possibility of a universe different from ours, but also maybe three, or twenty, or a gazillion universes. Illustrator Sam Molleur did.

More Than One Universe? Bring 'Em On!

More Than One Universe? Bring 'Em On! 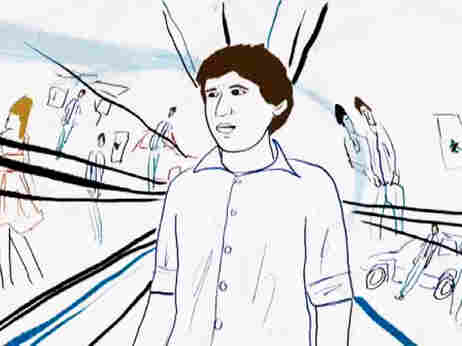 A lot of folks get stumped when they hear the word "universes," the plural. A universe sounds like it means everything there is and since common sense tells you there can't be more than "everything there is," universe should remain a singular. A one and only. 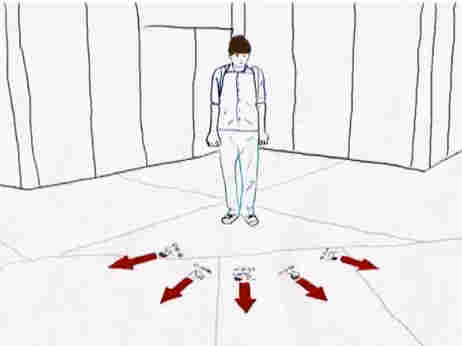 But what if....? say the quantum physicists ... What if ... deep down, down below the level of atoms and protons and neutrons and quarks, down at the very bottom of things, down where nature is "fundamental," what if everything down there is in a constant jitter, constantly creating and destroying and throwing up new combinations? What if the fundamental laws of nature not only allow the possibility of a universe different from ours, but allow there to be more than one, maybe three, or 10 or a gazillion universes?

Well, if you are brave enough to risk sounding stupid out loud, you might say, "Excuse me?" How could there be anything "separate" from our universe? And where would we find that other universe?  Is there room in ours for another one? Or does it exist "out there" in another dimension? How would we know if it's there? If we can't know, why should we care?

Quantum physics has that effect on people. People (and I'm one of them) like science to be predictable, testable and something we can grasp, even fitfully. We'd like our existence to be that way, too.

Frightened Rabbit - "I Feel Better" from This is What We Imagine on Vimeo.

Suppose you're standing on a street corner wondering whether to jaywalk or wait for the light to turn green? If you jaywalk, yes, you might get hit by a girl on a bicycle, fall in love with her, marry her and live happily ever after. Or if you wait at the light, you might miss the collision, miss your true love and live differently ever after. We all know that every choice creates new possibilities.

There are movies about that.

Meanwhile, there's a vanilla universe waiting for them if they go the other way. (The vanilla doesn't drip, so no trip to the cleaners, which gives you time to chat with your brother ... etc., etc.) The thing is: This isn't a poetical notion that says every choice begets a different future. No, this is hardball. When you choose chocolate, you are choosing to live in the Chocolate Universe living out the consequences of your Chocolate choice. Meanwhile the Vanilla Chooser that Could Have Been You is going on in the Vanilla Universe. Both universes physically exist, side by side. These folks believe there are an infinite number of physical universes out there that literally house every possible outcome of our decisions. Even decisions we haven't made yet.

And irritatingly operatic. Why create a universe to handle a choice of ice creams? Just order, slurp and be done with it.

But now comes the surprise.

Browsing the Internet one day, I found a nonscientist by the name of Sam who likes the idea of parallel universes. He's charmed by the idea, and he is more than happy to discover that every one of his small, unimportant decisions has Big Consequences. That every option -- the one he chooses and the one he didn't -- they all get universes.

That such a nutty idea could produce such a pleasant sci-fi adventure is due to video artist Sam Molleur's special gifts. He draws well, thinks well, and, as you'll see, he's good at happy endings.

When I wrote Sam a fan letter, he wrote back that when he thinks about science, he wonders about the people who come up with these ideas. "For instance, would multiverse theory truly have ever come about without some physicists somewhere doubting the decisions they make daily? Would the concept of time travel ever have come about without us selfishly wishing we could relive and correct our past, visualize our future?"

Maybe. Ask a quantum physicist, "What led you to multiple universes?" She/he’d probably say, "The mathematical equations I use to describe the universe took me to these queer places"; they are logic lemmings, led by math to things that their senses can't even imagine. It's also possible they have trouble choosing between vanilla and chocolate desserts. I don't know.