Accessibility links
Visualizing Memory, Photographing War Stories : The Picture Show How do you photograph memory? It's a question that fine-art photographer Jennifer Karady is exploring. And not just any memory, but memories of war brought home by veterans of Iraq and Afghanistan.

How do you photograph memory? It's a question that fine-art photographer Jennifer Karady is exploring. Her latest project visualizes not just any memory, but memories of war brought home by veterans of Iraq and Afghanistan. An exhibition of photos from her ongoing project, "Soldiers' Stories of Iraq and Afghanistan," is currently on display at SF CameraWork in San Francisco.

Another platoon that operated in the same area actually hit one. They had hit one a couple months earlier too. Luckily they survived that. We lost two people from an IED [improvised explosive device] in the first two weeks we were in Afghanistan.

After coming back home, you think about Afghanistan and how it was driving there compared to here. Occasionally it will go through your mind, driving down the road, to look out for IEDs. It's an instinct that is hard to turn off. When I went to drill last month, going to Winchester on 81, it happened. And it was just a tire from a tractor-trailer recap up ahead. It doesn't happen every day. I could go a couple of weeks, a month, and not see it. But driving down the road, something’s going to click in your mind."

Mike was deployed to Kuwait for a second tour as part of Operation Iraqi Freedom in 2007–08. He is now retired from the military.

Read the rest of the soldiers' stories on Karady's website.

Karady is not a journalist; she's not a documentary photographer. She's a fine artist. And among many things, she's interested in "staged narrative tableau paintings," as she put it -- images that are carefully composed and visually dramatic. Before 2004, her work had nothing to do with war. But in following the news from Iraq and Afghanistan, she became intrigued by the first-person narratives told by returning veterans -- and thought her style of photography might be a way to tell those stories visually.

For veterans, though, they are not easy stories to tell. "Unless you’ve worn the boots," says Starlyn Lara, "you just don't understand the life." Lara's portrait is the last in Karady's series: She is bolt upright in bed -- as if waking from a nightmare. The room around her is completely scorched. But she's fully clad in uniform, and a giant pink rabbit looms in the background. 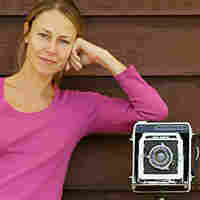 It's meant to give voice to the recurring nightmares she's had since surviving a roadside bomb in Iraq. "You can ask me a hundred things about who I am and what I do, but I will rarely discuss these events," Lara explains. "And this was an opportunity ... to express something that I probably wouldn’t have. ... It allowed me to tell my story without telling the story."

Each image is a time-intensive collaborative process. Karady spends hours interviewing the veterans -- over the course of many weeks. Together they pinpoint a memory to visualize, and a setting in which to do so metaphorically. The photos are interpretations, not reenactments. They represent not only memories of war, but also how those memories come home. In the words of exhibition curator Chuck Mobley, veterans are "returning from those wars, and they're coming back with these memories and these experiences that color their lives."

The first photo in the series, for example, shows Mike Sprouse, fully clad in army uniform on the side of a road in suburban America. He's in a Rockwellian neighborhood of neatly groomed houses, but he's staring at a tire with wires coming out of it. He thought that roadside tire was an IED -- an improvised explosive device. And the photo is meant to represent the surreal nature of living in two worlds: Sprouse is physically in America, but his mind and reflexes are still in Afghanistan.

There's something uneasy about the photographs. On one hand, that's because they suggest the enduring anxiety that veterans feel in the midst of a completely normal America; on the other hand, that uneasiness might be symptomatic of a bigger issue: that war and art may not be so easily reconciled.

"It's very hard to maintain the artsiness of photography when you're dealing with war," explains Philip Kennicott, culture critic at The Washington Post. His concern, and indeed the most disconcerting aspect of this series, is that in a sense, Karady's striking artistic style seems to overshadow the veterans' stories, which are captioned to accompany the photos. "And when the vector of art is becoming more prominent," Kennicott continues, "I begin to worry about the soldiers. I begin to think: Are they being manipulated?"

In the end, the stories seem to triumph -- what sticks are the first-person narratives that initially intrigued Karady. "I wouldn't be doing it if I didn't think it was going to do some good somehow," says Karady. The intersection of art and war may be tricky territory, but at least these photos have sparked conversation. They've gotten soldiers to tell their difficult stories, and gotten the civilian world to both listen and look.