Accessibility links
Churches Sprout In Rural China : The Picture Show Photos of rural Protestant churches show how deeply Christianity has become entrenched into the traditions and customs of eastern China.

Being a Christian in China effectively involves making a political choice: deciding whether to worship at a government-approved church, or at an unofficial gathering known as a “house church.”

Some of the state-sanctioned churches seat more than 1,000 people, with overflow rooms crammed with believers listening to the service on an audio feed. By contrast, in the house churches of China’s dusty rural villages, worshippers gather in freezing, bare rooms with earthen floors, furnished with little more than a handful of wooden stools and a Bible, to follow an unofficial prayer leader.

These photos of Protestant churches were taken this winter in parts of eastern China, where Western missionaries were extremely active before the Communist revolution. Due to sensitivities surrounding religion in China, where many worshippers still fear the interference of the state in their religious activities, we did not identify the people, or the locations of the churches.

Official figures indicate that one in 10 people in this part of China are Christian, but locals believe those figures are very conservative because they don’t take into account worshippers at house churches. However, some Christians said the divide between official and unofficial worshippers is beginning to close, with some believers moving between the two congregations.

The spiritual richness on show in these rural churches contrasts with the material poverty. Recycled rice sacks, one of the few materials freely available, are used for rudimentary cushions, kneelers and door coverings. It’s also worth noting that, in these pictures, the chunlian – the Chinese New Year couplets posted on either side of the front door to welcome in the new year – have Christian content and messages.  That’s one small illustration of how deeply Christianity has become entrenched in traditions and customs in this part of China.

In The Land Of Mao, A Rising Tide Of Christianity 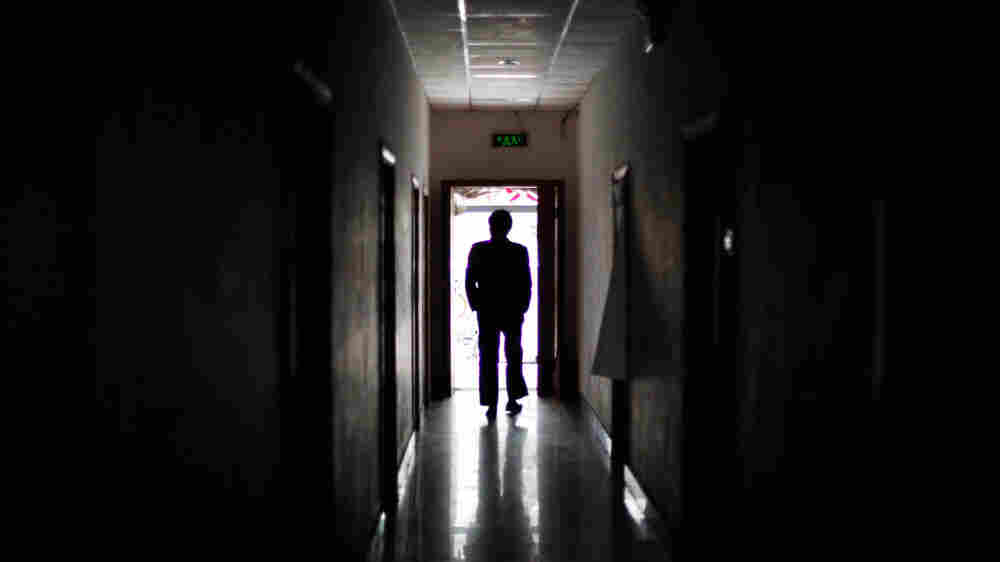 A man walks through a Beijing building formerly used as a secret detention center in 2009. In these "black jails," Chinese citizens are held, forcibly restrained and sometimes beaten to prevent them from lodging formal complaints with the central government. Elizabeth Dalziel/AP hide caption 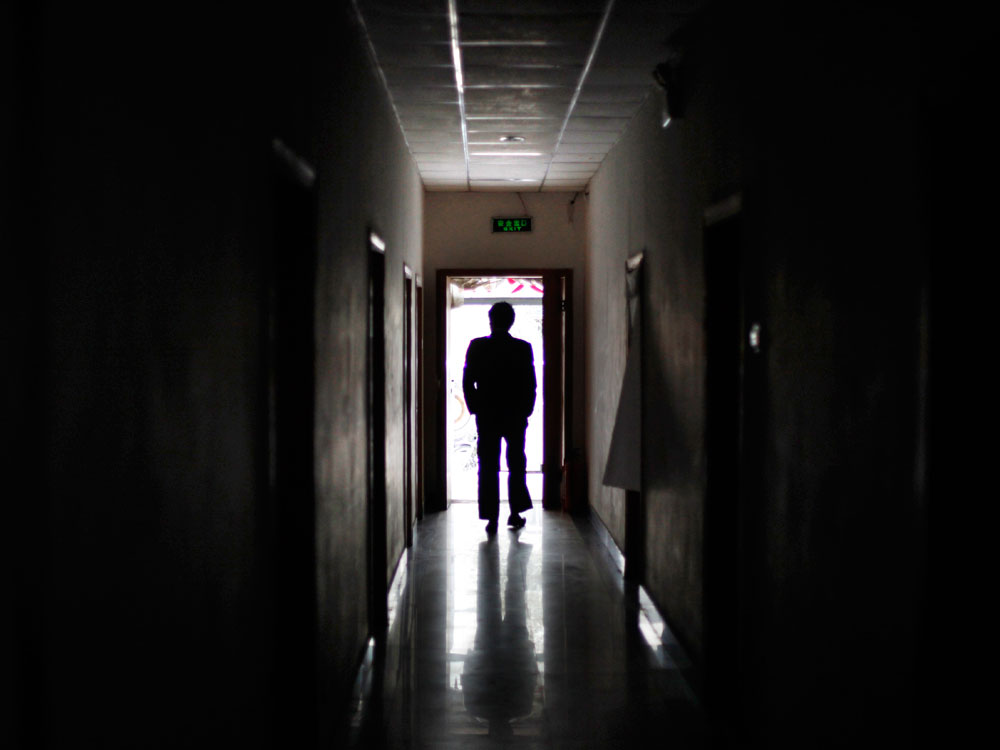 A man walks through a Beijing building formerly used as a secret detention center in 2009. In these "black jails," Chinese citizens are held, forcibly restrained and sometimes beaten to prevent them from lodging formal complaints with the central government.

If you consider that as recently as a generation ago, China did not have any trial lawyers or a criminal law, the country has come a long way in establishing a legal system.

But there are many instances in which the laws on the books don't have much effect, and society runs according to a completely different set of unwritten rules. Some Chinese call these "hidden rules."

An example of how these hidden rules work can be found just a couple minutes' walk from one of Beijing's busiest downtown intersections.

There sits a small hotel run by the government of South China's Guangxi province. Provincial officials occasionally use the hotel to secretly detain people who come to the capital to complain about local government abuses. They are kept under a sort of house arrest until they can be shipped home.

China has denied the existence of "black jails" to the United Nations' human rights commission, but almost anyone petitioning the government can show you one.

Inside the Beijing hotel, a human rights activist explains, is a woman named Liu Xinyu, who has come to the capital to complain that a developer bulldozed her ancestral home without paying her a fair price.

In the hall outside her room, Liu stands next to two sullen and bewildered-looking young women Liu says were hired to guard her -- one short and plump, the other tall and skinny. 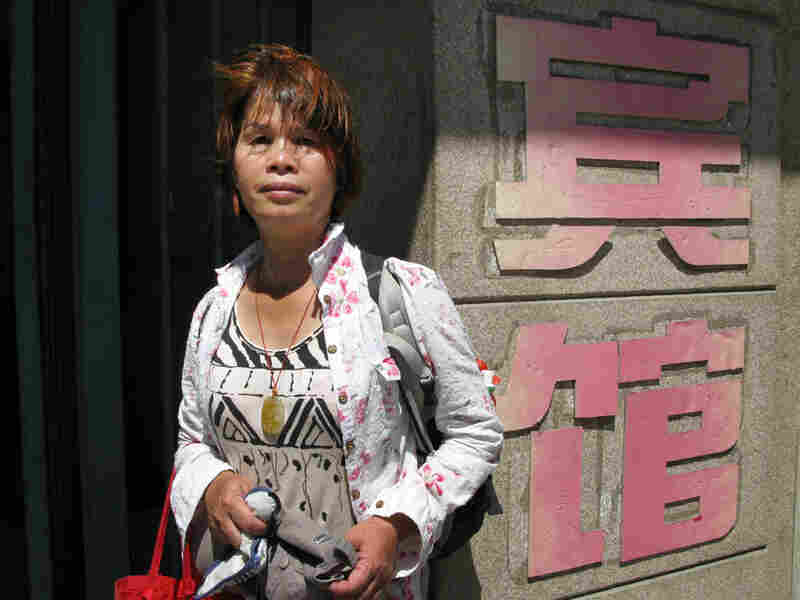 Petitioner Liu Xinyu stands outside a Beijing hotel where she was recently detained by provincial officials. The hotel is run by the Guangxi provincial government's liaison office in Beijing. Unlike some secret detention facilities, known in China as "black jails," there are no iron bars on the hotel's doors or windows, but Liu says two female guards were hired to monitor her around the clock. Anthony Kuhn/NPR hide caption 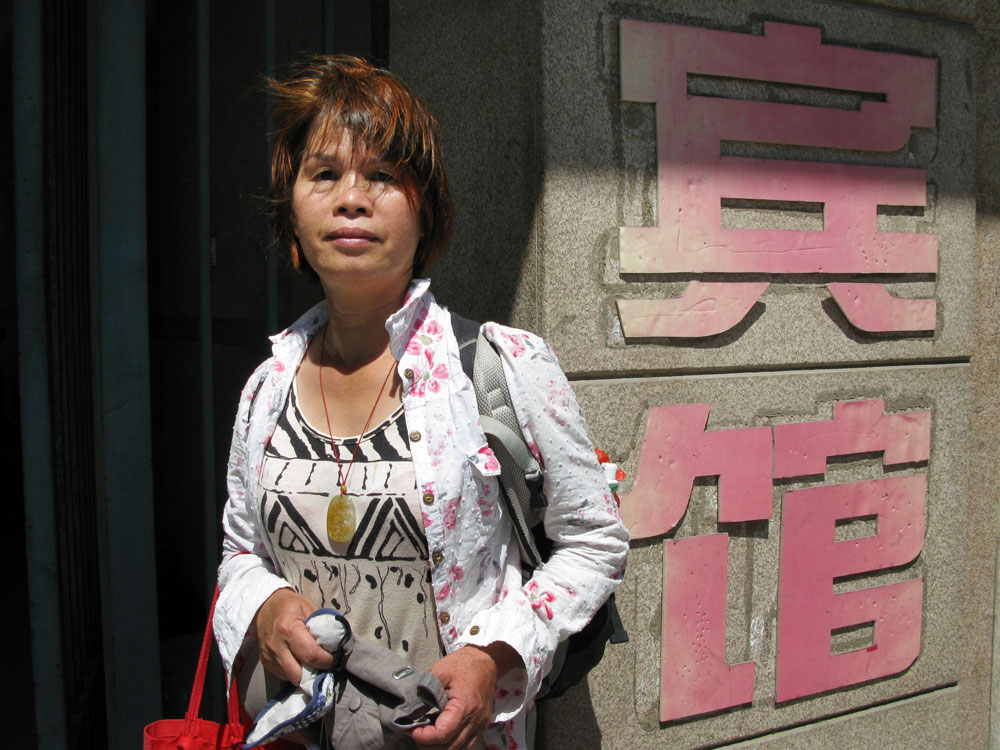 Petitioner Liu Xinyu stands outside a Beijing hotel where she was recently detained by provincial officials. The hotel is run by the Guangxi provincial government's liaison office in Beijing. Unlike some secret detention facilities, known in China as "black jails," there are no iron bars on the hotel's doors or windows, but Liu says two female guards were hired to monitor her around the clock.

Liu ignores them and goes into her room to talk in private. "I was brought here by people sent by the provincial government to stop me from petitioning," she explains, seated on the bed, wearing a leopard-spotted T-shirt and black tights.

"I haven't exactly been detained here, but I'm not free, and they won't let me leave," she says nervously.

The officials have told Liu that they are just there to protect her. But when she makes her way to the door, a middle-aged official in the hallway objects.

"You'd best leave this matter to us," he says. He dodges the microphone and refuses to answer questions. "China is different," he insists. "We have our regulations here."

Liu makes it to the street, heading for a drug store, with the official trailing not far behind. Liu eventually returns to the hotel, clinging to hope that the government will help her.

Liu's hotel is a minimum-security facility. There are other makeshift detention facilities in places like rented farmyards and guesthouses that are better guarded.

A Kind Of Cottage Industry

Although Chinese law gives citizens the right to petition the government to redress their grievances, petitioners say the government treats them like outlaws. And they say police are often complicit in the black jails' operation.

Zhao Fusheng, who is from Sichuan province, says he was detained in his provincial government's liaison office when he came to Beijing to file a petition. He says it was impossible to tell that it was a black jail from the outside.

"Once the provincial liaison officials get a hold of you, they put you in their basement," Zhao says. "Above the basement is a storefront. A door in the storefront opens, they throw you inside, and you're behind a layer of guards. If you disobey, they beat you."

Zhao says black jails have become a kind of cottage industry in Beijing.

"The provincial liaison offices pay the black jail operators the equivalent of $36 per detainee per day. Of that, about $15 goes to hire a guard, another $15 for food, and the rest for accommodations," Zhao says.

Joshua Rosenzweig, Hong Kong research manager for the human rights group the Dui Hua Foundation, says that while the central government wants citizens to inform on corrupt officials, it also expects local officials to maintain order and keep petitioners out of the capital.

"If you have petitioners from your area flocking to Beijing," Rosenzweig says, "it's a sign that you're not doing your job very well at the local level. And therefore, as a local official, you're going to do everything you can to stop those people from making you look bad."

Many local governments also maintain informal detention centers. Petitioner Jin Hanyan, from central Hubei province, says she accused her county's Communist Party secretary of corruption. For this, she says, she was sent to a "study class" in an abandoned factory. Of course, she says, no studying actually went on in there.

"In the mornings, they'd yell to wake us up," Jin says. "They'd make us do calisthenics and pull weeds. If you didn't obey, they'd beat you to within an inch of your life and withhold medical treatment if you got sick. They said the county party secretary told them it was not illegal to beat us to death."

Following that interview, word comes that Jin has been forcibly detained in a mental institution by her local government.

Beijing-based journalist Wu Si says the black jails are an expression of the phenomenon he explored in his 2002 book Hidden Rules. Government censors banned the book, but society now widely uses the term to describe the way things really work in China today.

"There have been many of these kinds of places, both in China's history and in the present day," Wu says. "They're an expression of officials' power to legally harm citizens. I call them 'gray jails.' They're neither formal jails, nor something that is entirely illegal. They're an oddity that exists in a sort of gray area."

Wu says this is the hidden rule that makes all the others stick: Officials have the power to punish citizens more or less at will, either for challenging their authority, or just to extort money out of them.

China is certainly not the only society with hidden rules. Nor is it the only society in which the rule of law is often a mere fig leaf for the rule of man. But China's hidden rules are especially elaborate. They are also in glaring conflict with the country's laws and with the Confucian virtues that centuries of Chinese governments have espoused.

"The formal rules used to say that county officials should act like people's parents," Wu says. "In fact, they acted like masters and lorded it over the common people. Those beneath them had to show deference, kowtow before them, and offer them all sorts of goods and favors."

The Root Of The Problem

Some time after NPR's interview with Liu Xinyu at the Beijing hotel, local human rights activists freed her.

Standing outside, Liu says she now sees her former captors as pathetic.

The Dui Hua Foundation's Rosenzweig points out that local officials could strike at the root of the problem by resolving the petitioners' problems. But unfortunately, that's not the way the hidden rules work, and for that reason, they devote their energies to silencing the petitioners.