Accessibility links
The First Photograph On Display : The Picture Show Actually, it's a heliograph. Although rediscovered in 1952, the public can now see it on display.

The First Photograph On Display

The First Photograph On Display

Actually, the "first photograph" is a heliograph, or "sun drawing." And its rediscovery was officially announced in 1952, so it's not really news. Sorry. But many visitors to a new exhibition in Texas are discovering it for the first time.

At first glance, you may be struck by its uncanny resemblance to a blank piece of metal. 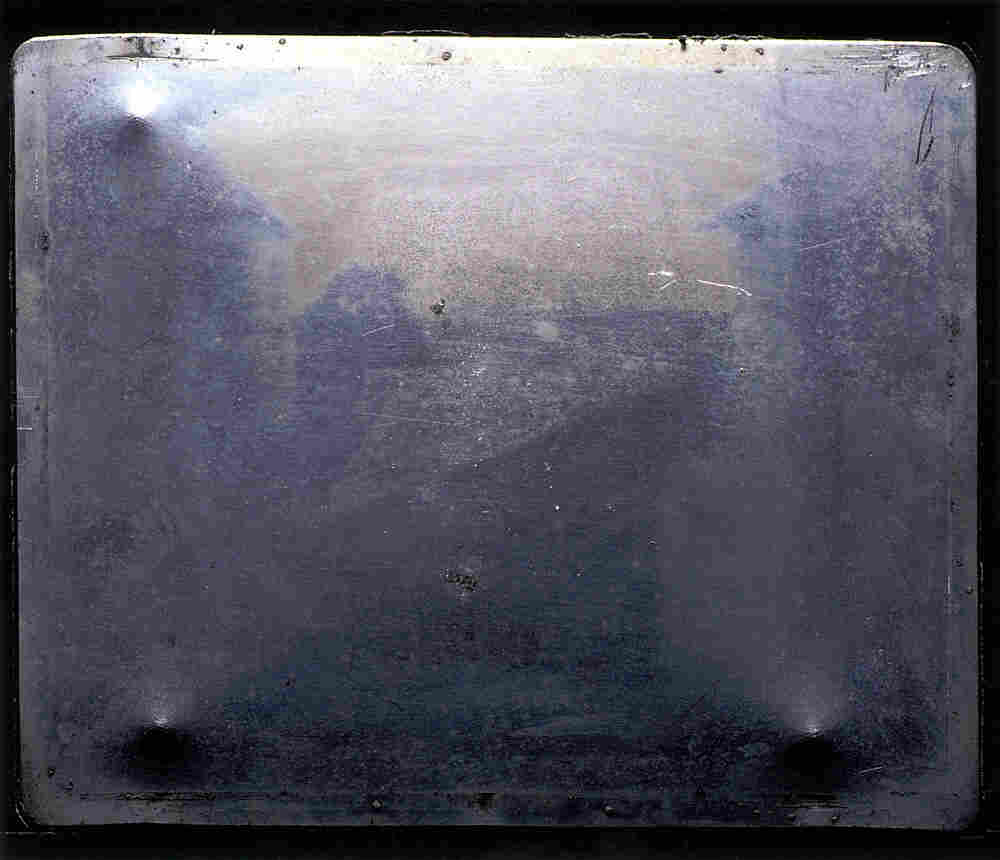 Official image of the "first photograph" -- Joseph Nicephore Niepce's View from the Window at Le Gras, circa 1826 -- in 2003, without manual retouching. Courtesy of Harry Ransom Center hide caption

But if you look closer, the vague outline of a tree and building begin to emerge. Suddenly it's 1826 and you're staring out the window of a French country home. With some stretch of the imagination.

A few notable notes about this photo:

For those reasons, and certainly some more academic ones, Niepce's "first photograph" is one of the most coveted items in the University of Texas' Gernsheim Collection. You can also imagine the elation of Helmut Gernhseim when, after years of hunting, he finally found the plate. In a collection of more than 36,000 items amassed by him and his wife, Alison, it is indeed the holy grail.

Now, nearly 200 photos from their collection, purchased by UT's Harry Ransom Center in the '60s, can been seen on display. It is the first in-depth viewing of one of the first and most extensive personal photographic collections in history. In the mid-1900s, "nobody was really collecting photography," says David Coleman, curator of photography at the Harry Ransom Center. "It was a rare thing to be doing generally."

But the Gernsheims were ahead of the curve. Before photography was widely regarded as art, they were busy amassing plates, prints and pictures. According to Coleman, Gernsheim was responsible for establishing Niepce as "the inventor of the medium of photography," and for "rediscovering Lewis Carroll as a photographer." He wrote how-to guides and textbooks before the general public even cared about photography. Gernsheim was not only an early practitioner and premature collector of photography, but also one of the first photography scholars.

As it always goes in the scramble for history's superlatives — of first photographs, oldest hominid knee caps, etc. — it is perhaps only a matter of time before some other photo outdates that of Niepce. But for now, the Harry Ransom Center can claim it; and you can see it in Austin through January.

Learn more about the Gernsheims and the exhibition on the Harry Ransom Center website.