Accessibility links
Cowboys And Cameras: Nat Geo Photographer's Five-Decade Retrospective : The Picture Show A new exhibition showcases the work of photography master William Albert Allard, who has been in the pages of National Geographic for nearly 50 years.

William Albert Allard is a rare type. A type who wields guns and rides horses in the wilds of Montana — but also explores the streets of Paris, collects art books and hats, and says he would be a musician if he weren't a photographer. He writes as well as he photographs and is precisely what one might call a Renaissance man. In fact, the real Renaissance men just might be his greatest influences.

Allard has been photographing for nearly 50 years, many of them devoted to the pages of National Geographic. Actually, he corrected me on the phone, it's been "about 46-and-a-half years," if you want to split hairs. But a new exhibition at Steven Kasher Gallery in New York is honoring Allard with a five-decade retrospective exhibition.

Kasher, the gallery owner, says he has always been an admirer. "I remember vividly reading National Geographic in the library of PS 87 in sixth grade," at which point Allard's photos were making their debut. "I think Bill Allard is a national treasure of photography," he says. "Maybe he's absorbed the lessons of people like Rembrandt and Van Gogh ... how to put things together in that rectangle that reach into our heart and make us feel surprised."

Allard, though humble, wouldn't argue with that. "I have probably been influenced by painters more than photographers," he says. Take this photo from France, for example: 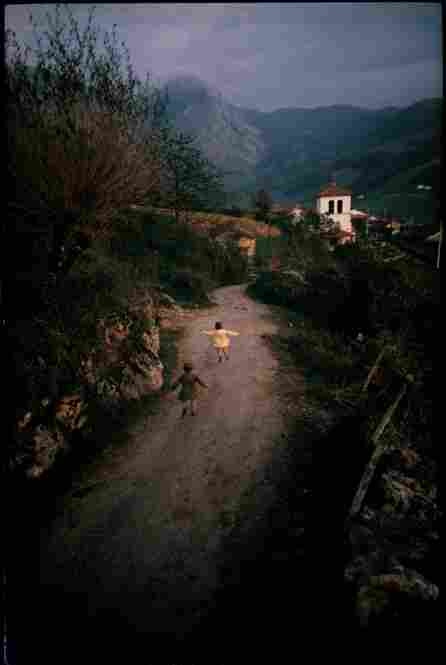 Although Allard is considered a documentary photographer, this is an example of what photo critics would call "painterly" — a word usually reserved for fine art, not necessarily photojournalism.

"I can still remember making that image," he says in a poetic, Midwestern voice. "I heard the patter of their feet coming behind me. It was around dusk and the light had gone down, but it was coming back off the clouds — reflecting onto this curving road, almost like a broad floodlight. ... And I made two exposures with my Leica camera. ... One was an utter uninteresting blurred failure. And the other was just kind of magical: The girls aren't running, they're not skipping. They're floating in the air."

In a sense, Allard's work defies category because, as this exhibition proves, it can be found both in magazines and on gallery walls. His goal, he says, is to show reality, plain and simple. But there is something more profound to his work, perhaps in that very simplicity, that suggests some deeper meaning, some heavier feeling.

"I really believe if you can make that picture well enough, you can introduce someone who might be a continent removed, a language removed — somehow that viewer can get the feeling that they know something about the person in the picture."

From the library of PS 87 or from a New York City gallery, we can access insular Hutterite communities; ride with real cowboys in the gritty American West; plunge into the darkness of India's "untouchables"; experience the levity of Paris street life and the wanderlust of Basque country and South America.

"William Albert Allard: Five Decades, A Retrospective" opens today and runs through January; it is supplemented by a companion book of the same title.