Accessibility links
From Trenches To T-Shirts: The Ubiquity Of Che, And More Iconic Cuba : The Picture Show A New York exhibition comes close to a comprehensive look at revolutionary Cuba — including iconic portraits, anti-Beatles propaganda and quieter, daily Cuban life.

From Trenches To T-Shirts: The Ubiquity Of Che, And More Iconic Cuba

From Trenches To T-Shirts: The Ubiquity Of Che, And More Iconic Cuba

I like to imagine Che Guevara visiting my high school outside of Nashville. There, about a thousand miles from Cuba and a few solid decades from the Cuban Revolution, he would have been met by his very own face, emblazoned on t-shirts and lockers of angst-filled, middle-American teenagers. 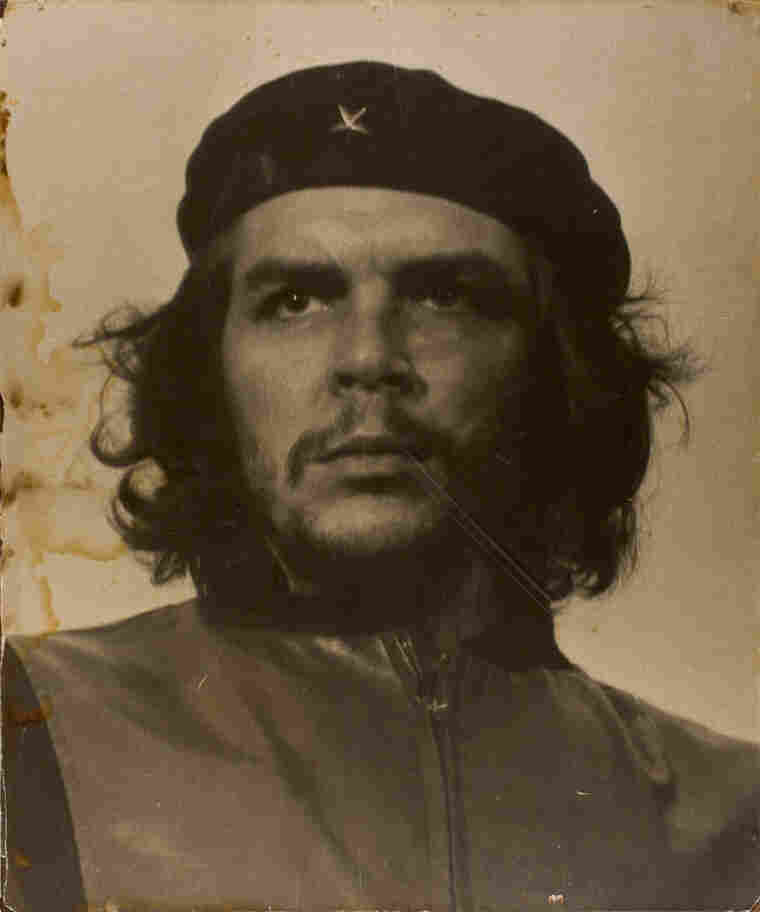 On the one hand, Che "merch" is just silly. But on the other, the ubiquity of his face is a testament to the power of a photograph. The Argentina-born Guevara, who was once an international symbol of revolution, has become both a pop culture icon and the mascot for an elusive idea of counterculture. And that famous portrait, according to Brian Wallis, chief curator at the International Center of Photography, "has become the most reproduced picture in the world at this point."

Guerrillero Heroico (Heroic Guerrilla), as the image is called, was taken in 1960 by Cuban photographer Alberto Korda. He had become Fidel Castro's right-hand photographer at the onset of the revolution that ousted U.S.-backed dictator Fulgencio Batista.

But Korda's background, Wallis explains, was in fashion photography — which would explain his eye for the iconic. What appears to be posed was actually a split-second candid moment at an event where Fidel Castro was addressing victims of a shipyard explosion. (If you look at the original image, you can see what a difference cropping can make.)

This image is just one of many currently on display at the International Center of Photography. The exhibition, Cuba In Revolution, ends next month, but has tapped into a broader ubiquitous fascination with Cuba. Why now? For one, as Wallis says, "there's nothing like this archive that's been created — even in Cuba." He's referring to a collection of photographs amassed by The International Art Heritage Foundation — an unrivaled lens on revolutionary Cuba.

"The Cuban revolution was kind of startingly photogenic," Wallis says on the phone."The perpetrators were young and glamorous. They were extremely theatrical and demonstrative. And they knew how to seize hold of the media and make things interesting."

And the media loved photographing them. In the '50s and '60s, photographers flocked to Cuba like moths to a streetlamp. Great photojournalists like Henri Cartier-Bresson, Rene Burri and Elliott Erwitt captured unforgettable portraits, street and battle scenes, many of which can be seen in the exhibition.

But what's truly special about this show is the selection of imagery by Cuban photographers. People like Alberto Korda, Raul Corrales and Jose Figueroa, whose work is being shown pretty much for the first time, Wallis explains. "These are all incredible photographers whose work is largely unknown because it really hasn't been seen that much outside of Cuba itself."

The work of Figueroa, for example, shows everyday Cuba — a quieter Cuba in the shadows of sensational revolutionary events. Teenage boys in Havana pose with a Beatles album, although revolutionary officials had prohibited their music. Juxtaposed to that image is footage of anti-Beatles propaganda — seemingly counter-revolutionary, but undoubtedly a state-run campaign.

More than 180 images by 30 photographers span nearly two decades of social upheaval: Constantino Arias' pre-revolutionary Cuba, Burt Glinn's gun-slingers and American tourists, Mario Collado's Bay of Pigs. Some of the most harrowing, final images in the exhibition show Guevara just after his death: He's shirtless, on his back, eyes open. It has a strange religious quality to it, Wallis says, "so it just shows the power of the photographs of the leaders, even in death."

The photos end in 1968. After that, most authorized photographs of the revolution were limited to official images of Castro as the head of state. And so ended the golden age of photojournalism in Cuba. Yet certain images, like Korda's Guerrillero Heroico have outlived their subjects by decades, whether on t-shirts, on museum walls or in memory.