Accessibility links
The Mystery Of The Mexican Suitcase: A Trove Of Unseen Photos : The Picture Show This is the story of three yellowing boxes of old negatives that were lost to the world for more than half a century.

This is the story of a mystery. It's called the Mexican Suitcase. But it's not Mexican. And it's not a suitcase. It is three yellowing boxes of old negatives, 4,500 of them, that were lost to the world for more than half a century. The contents are presently on exhibit at the International Center of Photography in Manhattan. 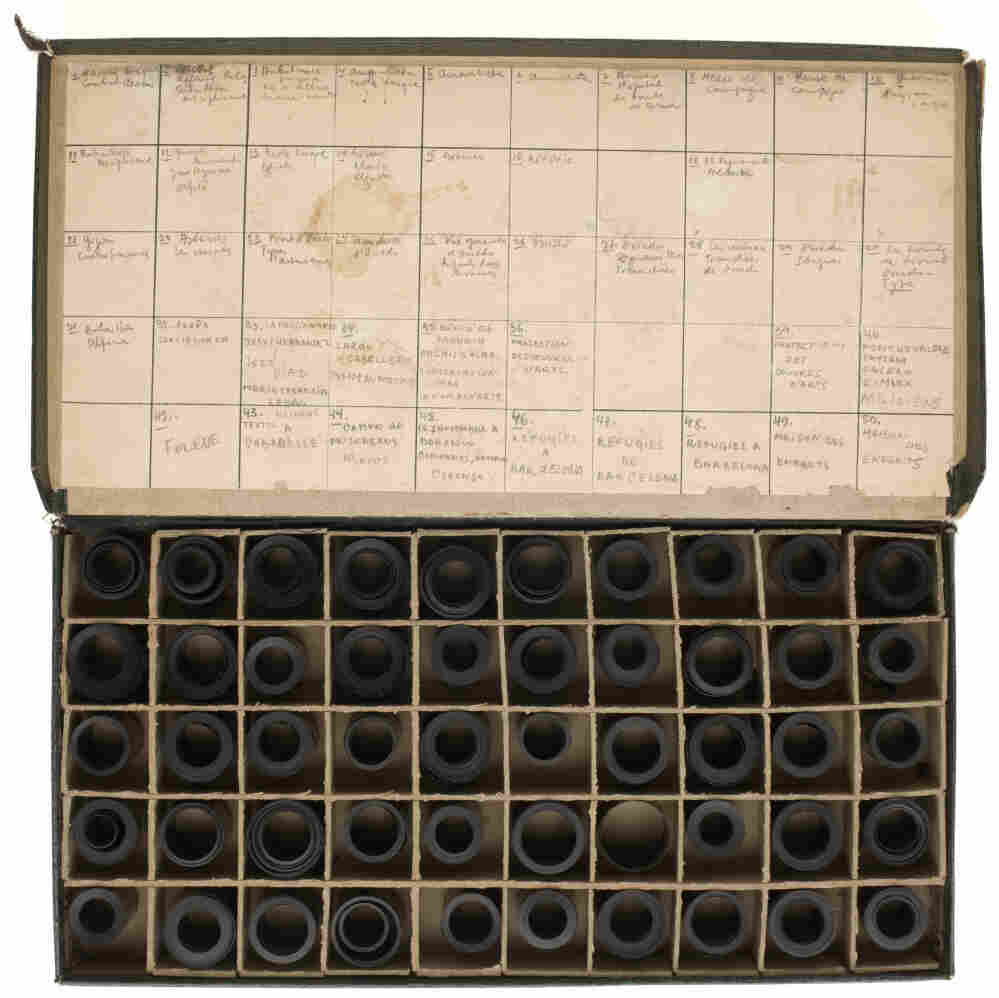 Courtesy of the International Center of Photography

Almost all the negatives are searing portraits of war, and of ordinary people living in the Spanish towns and countryside held by the anti-Franco forces during the Spanish Civil War. The photographs are by Robert Capa, Gerda Taro and David Seymour known as Chim.

Their work was the beginning of a new art of war photography. Until the Spanish Civil War, cameras were large, slow and heavy and could not easily capture action. With the advent of the small hand-held Leica, a photographer could move quickly and capture the action on the front lines.

What happened to the 4,500 negatives remains somewhat of a mystery. The negatives vanished after Capa gave them to his darkroom manager as he was escaping the Nazis in France. Cornell Capa, Capa's brother and the founder of the International Center of Photography, at one point organized a dig in France looking for the negatives. He also put a notice in a French magazine asking for help. All to no avail.

It later turned out that the darkroom manager had carried them on a bicycle to Bordeaux and gave them to a Chilean for safekeeping. Somehow or another they ended up with the Mexican ambassador to Vichy, France, and were eventually taken to Mexico City where they remained undiscovered. Years later, the ambassador's nephew realized what they were and they were finally given over to Capa's estate, and the International Center of Photography.

What's fascinating at the exhibit is that you can look at scores of tiny prints on contact sheets, frame by frame and then see what finally appears in photo news magazines like Look, or in left wing anti-Franco publications like Ce Soir and Regarde.

For example: Gerda Taro, who was Capa's partner, has a series of photographs outside and inside the morgue after the bombing of Valencia. You see the families waiting, pressed at the gates.

"You can see her searching for the photograph that will make the most impact," says Cynthia Young, curator of the exhibition. "At the seventh frame she turns her camera vertically, and then the last one she goes even closer than any other photograph, and it is that photograph that lands on the cover of Regarde magazine."  Then Taro goes into the morgue and photographs the still bloodied and unclean bodies that are lying on tables and on the floor.

The trove of negatives contains not only the war photos of Capa and Taro; there are Chim's photos of the poet Garcia Lorca just before he died and Capa's of Ernest Hemingway. There are also many photographs of the anti-Franco activist known as La Pasionaria. The last photographs are Capa's of refugee camps in France after Franco defeated the Republicans.

Capa, Taro and Chim were partisans of the Republican cause, and the defeat of fascism. They were not objective journalists, says Young. That type of political engagement by photographers "is not common today -- it is almost not even allowed in certain forms of journalism. Every frame was important to them," she adds. "Every frame tells a story."

All three photojournalists, one Hungarian, one German, one Polish, died in action. Capa, who covered five wars, was killed when he stepped on a landmine during the Indochina war in 1954. Taro was killed in Spain by a tank during the battle of Brunete in 1937. Chim was killed in Suez in 1956 by a sniper.

You still may be wondering why the exhibition is called "The Mexican Suitcase." In the 1970s another cache of Robert Capa photographs was mysteriously found in a suitcase in Swedish government hands. Those photos were dubbed "The Swedish Suitcase," so the material from Mexico was dubbed "The Mexican Suitcase." The exhibition at the International Center of Photography continues until May.