Accessibility links
The Perilous Job Of Conflict Photography : The Picture Show The dangers of conflict photography weigh heavily, as does the knowledge that no story or photo is worth a life. But an assignment involves an adventure and a paycheck. 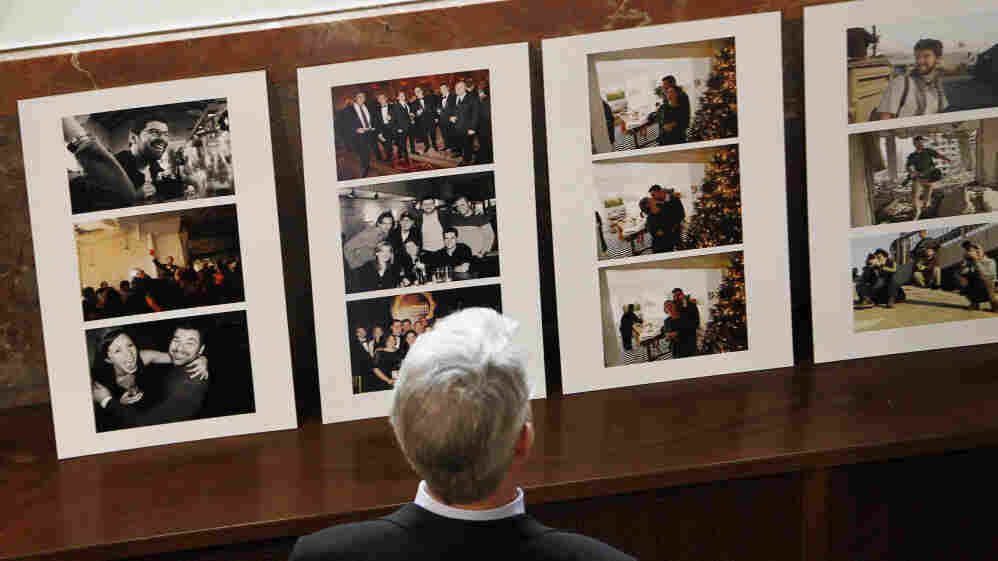 The journalists who cover war make up a tight-knit community. And they say they are still sifting through their emotions in the wake of the deaths last month of two experienced colleagues, Chris Hondros and Tim Hetherington, who were killed documenting the uprising in eastern Libya.

The dangers weigh heavily. So, too, does the knowledge that no story or photo is worth a life. But an assignment involves an adventure and a paycheck. 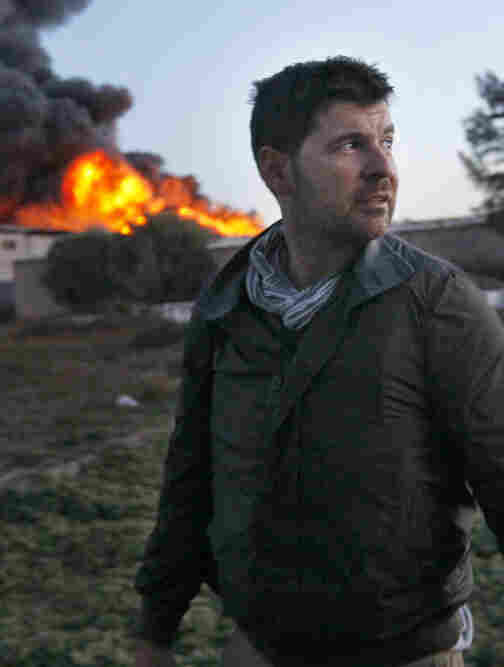 Chris Hondros stands in front of a burning building in Misrata, Libya, on April 18. Hondros, 41, died April 20, after being seriously wounded while on assignment in Misrata. AP hide caption 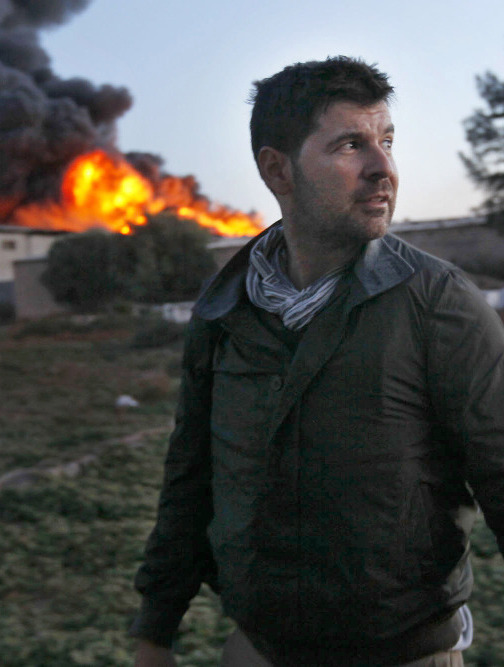 Chris Hondros stands in front of a burning building in Misrata, Libya, on April 18. Hondros, 41, died April 20, after being seriously wounded while on assignment in Misrata.

"We all know our luck could run out at any moment," said Stephanie Gaskell, a former war correspondent for The New York Daily News who runs the news site The War Report and considered Hondros both a friend and a mentor. "You have to be OK with it, and then you go to work."

Both men who died were experienced at covering war. But every day in the field requires carefully calibrated choices. 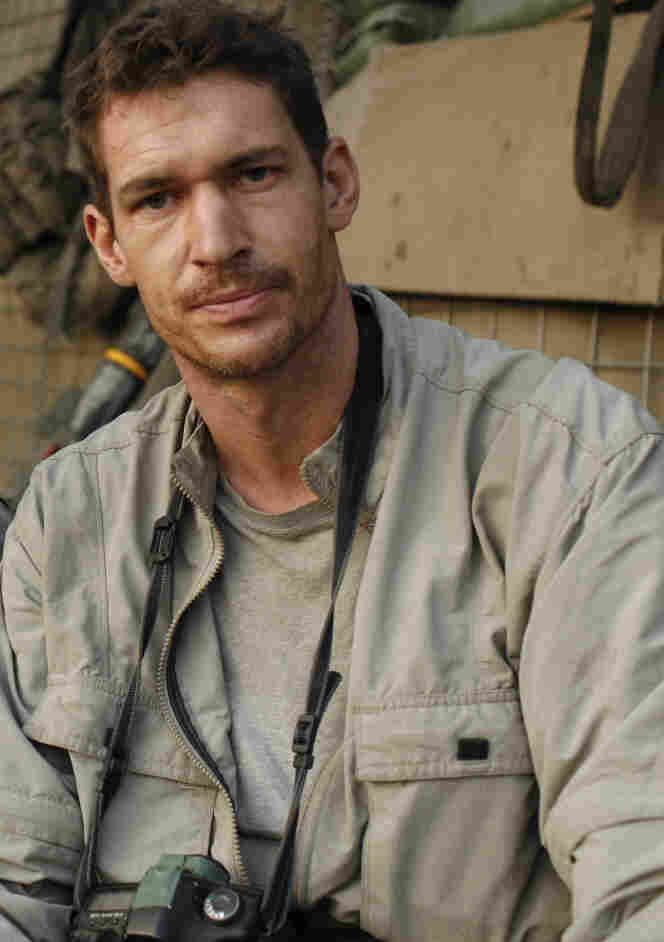 Photographer Tim Hetherington at the Restrepo outpost in the Korengal Valley, Afghanistan, during the filming of his documentary Restrepo. Hetherington was killed in Misrata, Libya, on April 20. Outpost Films via AP hide caption 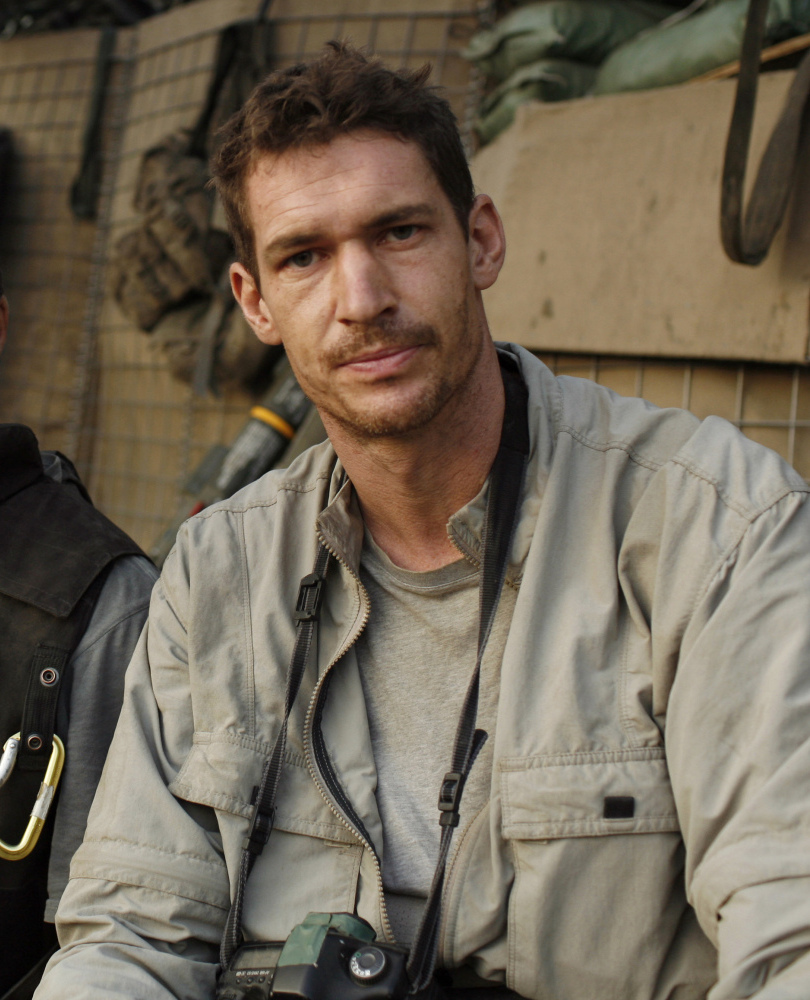 Photographer Tim Hetherington at the Restrepo outpost in the Korengal Valley, Afghanistan, during the filming of his documentary Restrepo. Hetherington was killed in Misrata, Libya, on April 20.

"It starts out in the abstract and moves to the reality of the situation — which is confusing, messy, chaotic and very often humiliating," said Bob Nickelsberg, a legendary war photojournalist who spent a quarter-century as a contract shooter for Time magazine, largely in Central America and South Asia.

"We're not as courageous as those heroes from movies in Hollywood and Europe make us out to be," Nickelsberg said. "We're scared most of the time. And there's reason for that. You have to keep your wits about you."

Yet there is an unexpected confluence of trends that make coverage of conflict more dangerous at a time when alternative sources of images and footage are sometimes readily available.

During uprisings in Syria and Bahrain, repressive regimes detained and tossed out Western journalists. As a result, most of the shots and footage capturing the protests and bloody reprisals there are coming from people in the streets themselves.

Santiago Lyon is director of photography for The Associated Press. He said the footage of Neda Agha-Soltan, mortally wounded by snipers in June 2009 during a crackdown on protesters in the streets of Tehran, became the iconic representation of that popular rebellion.

"The images of her dying, essentially in front of a cellphone camera, were really important in terms of telling the story," Lyon said.

Such citizen or amateur journalism has become an increasingly essential part of coverage, especially in areas that are not accessible to outsiders. Yet Lyon says news professionals still serve a vital role in applying journalistic approaches to verifying that those images are what they appear to be.

"It's very important when that material is picked up by journalistic organizations that it be vetted as thoroughly as possible and that it be put into context as much as possible," Lyon said. 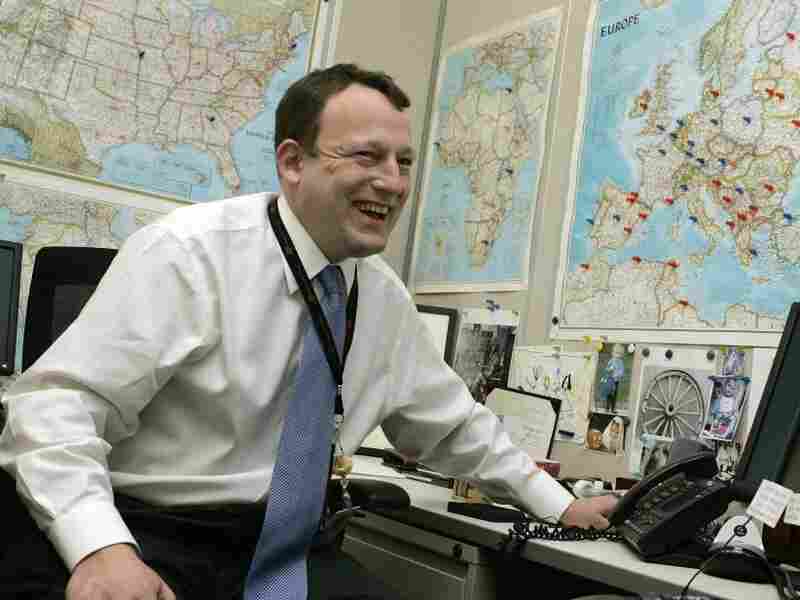 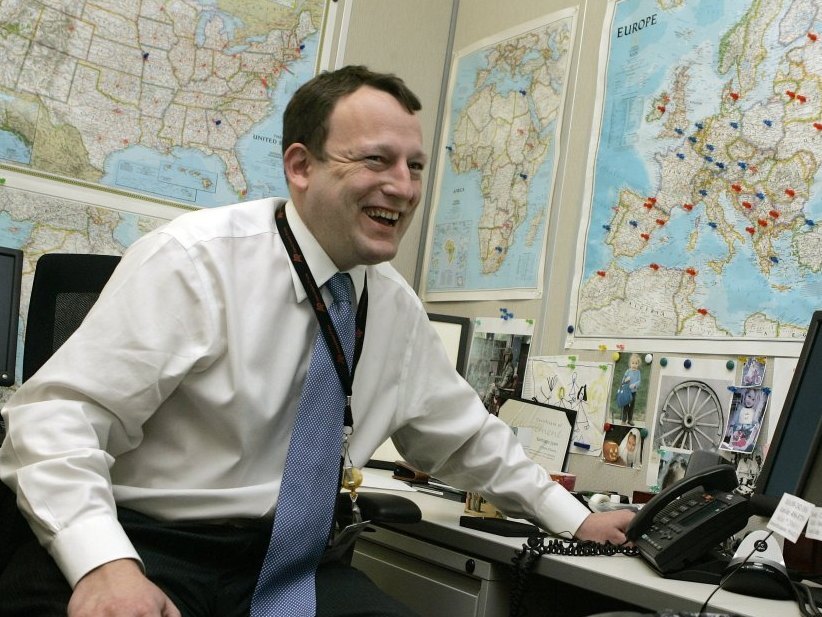 Meanwhile, combatants are no longer as likely to treat journalists as an irritant or simply a way to get out their message. Now, the journalists are being targeted. Journalists have been attacked in Egypt, Libya, Syria, Bahrain and other countries in recent months. Those with cameras swaying are particularly visible — and thus, particularly vulnerable.

"In Central America, the first thing you did when you arrived on a story was you would take some gaffer tape — some duct tape — and tape in big letters the letters 'TV' on the side of your car, to identify you as a journalist," said Lyon, who got his start covering conflict in El Salvador and the U.S. invasion of Panama in the 1980s. "Nowadays, that's the last thing you would do."

Technology has proved to be a double-edged sword. For reporters, it has shrunk the world: They can upload their stories quickly thanks to portable satellite technology. And thanks to satellite phones, Skype, Facebook and email services, reporters can talk with sources and eyewitnesses found in locations too remote, too arduous to reach.

For photographers, the immediacy of technology also holds true. But it plays out a bit differently. In past eras, they would have returned to bureaus away from combat to send film and photos back to editors in newsrooms. No longer.

"Journalists are able spend more time in harm's way," Lyon said. "On the one hand, it speeds up the transmission of information from a conflict area. On the other hand it exposes journalists for a longer amount of time to more danger and thus makes the whole thing more risky."

But every combat journalist I talked to said — despite the risks — it's worth the effort by professionals to try to get to such hot spots.

"Those snapshots that so-called citizen journalists take are hugely important. But I think that they can't replace a journalist," Gaskell said.

For her, Gaskell said, the question boiled down to this:

"Are you able to wake up in the morning and say, 'I'm OK with how I have lived my life up until this moment?' I think that's a pretty powerful thing."

She is planning her next reporting trip embedded with a military unit in Afghanistan in June. 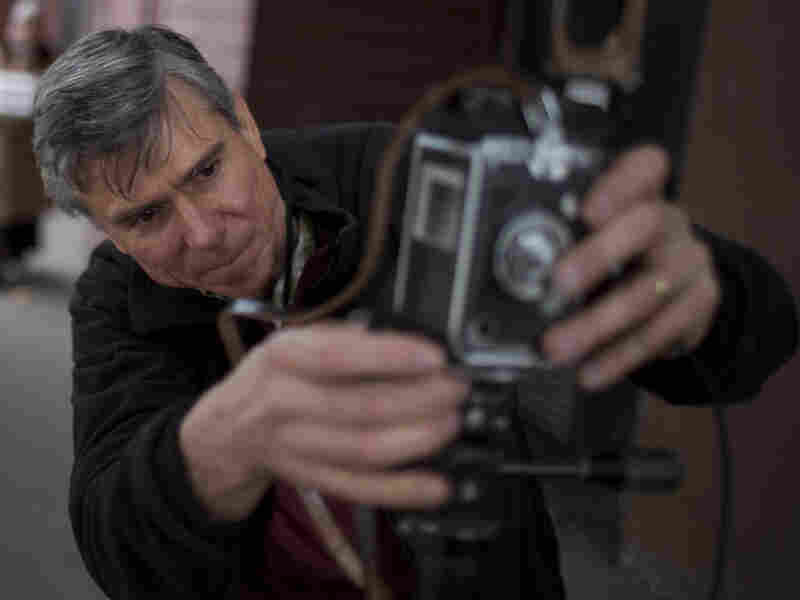 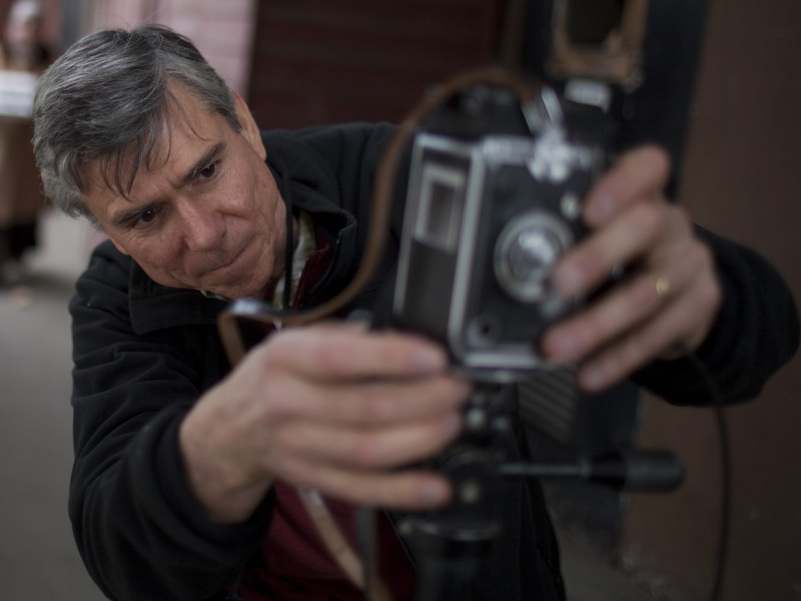 And at the age of 60, Bob Nickelsberg is also planning to head back to Afghanistan this summer. He recalls his years in South Asia as particularly bracing because of the complexities of the stories he sought to depict. "It was quite three-dimensional," Nickelsberg said. "You didn't have to go far to see how the legacy of a historical event played out on a daily basis."

The most dangerous assignments to predict, he said, involved urban violence like the kind that claimed the lives of Hondros and Hetherington, who were killed in Misrata in eastern Libya by mortar fire.

"You really don't know where anything is coming from. You can't tell by sound, by wind, by sun — what to expect," Nickelsberg said. "And it's just not possible to watch the rooftop as you're running through rubble."

Gaskell, Nickelsberg and Lyon joined hundreds of mourners at a recent memorial service for Hondros in Brooklyn, N.Y. Yet even as they grieve the loss of dear friends, photojournalists calculate the risks and, in many cases, head right back to hot spots. They seek to bear witness to war, suffering and repression and to share what they've learned with the world. 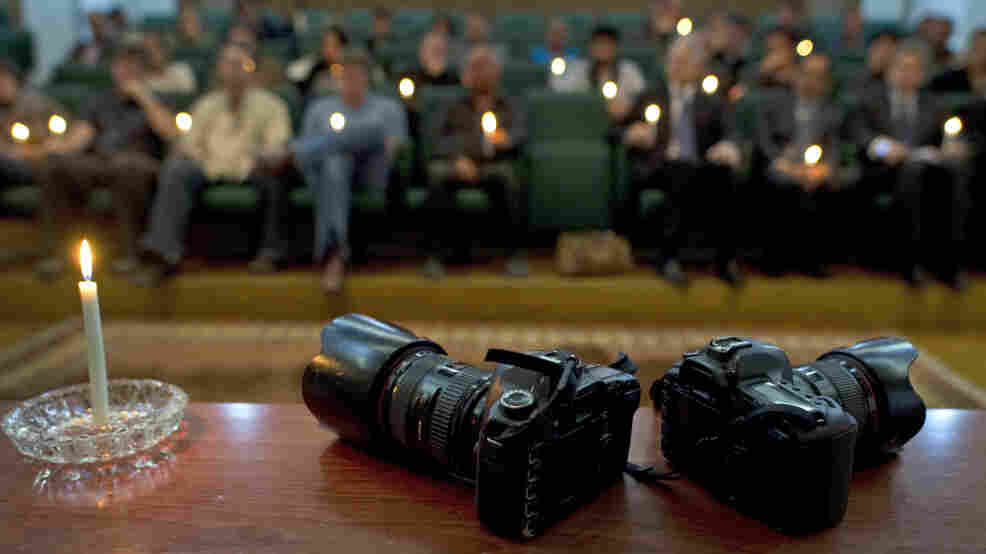 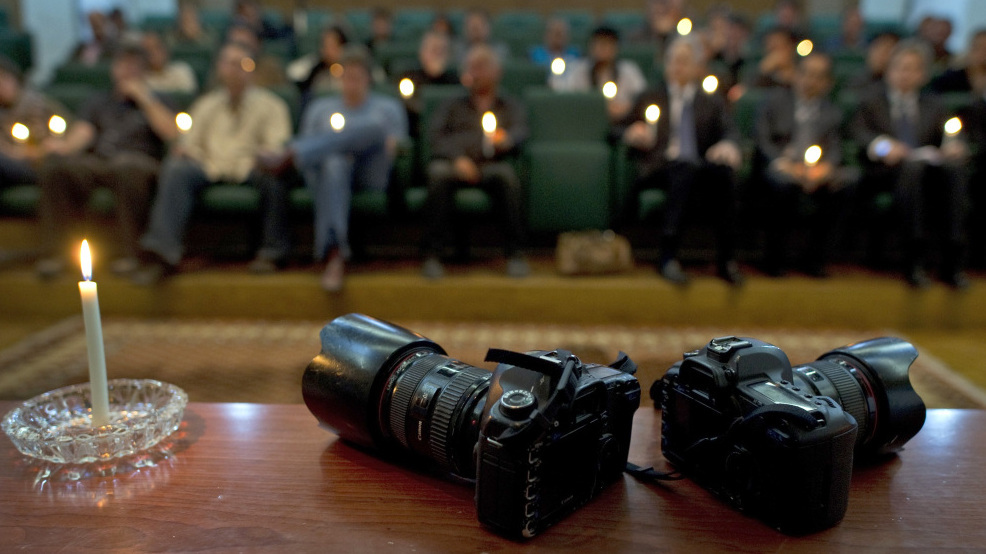 Two cameras are posed symbolically during a memorial service for photojournalists Tim Hetherington and Chris Hondros held in Benghazi on April 21.

Lyon says all combat assignments are voluntary. In 1995 on assignment in Sarajevo, he was wounded in the leg by shrapnel from a mortar round during intense fighting there. It took six months to heal — and he said he was itching to get back during his convalescence.

"And like a lot of relationships, to those outside of them, they are a mystery of sorts."