Accessibility links
Billy Nardozzi: Pittsburgh Poet, Local Legend : The Picture Show Several years ago, an unusual face began appearing in the Pittsburgh Post-Gazette, over and over again. It wasn't a mug shot; it wasn't a columnist's headshot. It was the face of Billy Nardozzi.

We have teamed up with Pictory magazine and asked readers to submit photos and stories about local legends. Don't miss our big, collaborative showcase on the Pictory website. Additionally, The Picture Show will feature a few of the submissions here, in an ongoing feature.

This image of Billy Nardozzi came to us from Brett Yasko, a Pittsburgh designer. Technically the photo isn't great, but that's part of the story. 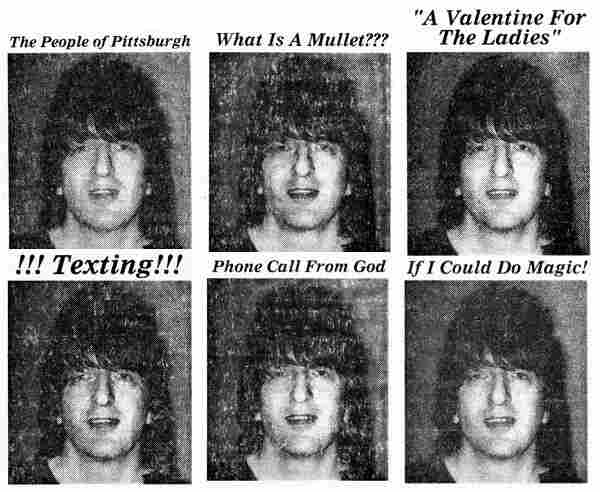 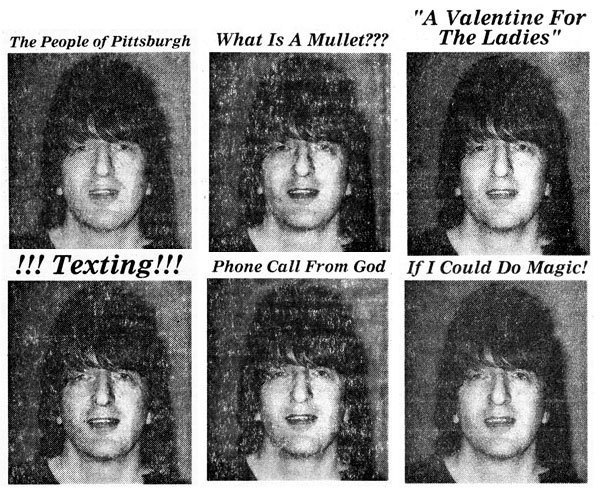 Several years ago, an unusual face began appearing in the Pittsburgh Post-Gazette, over and over again. It wasn't a mug shot; it wasn't a columnist's headshot. It was the face of Billy Nardozzi. For years now, Nardozzi has paid — almost monthly, if not more — to have his poetry published in the newspaper. Each poem is accompanied by his photo, always the same photo. And for a long time, no one really knew who he was.

Graphic designer Brett Yasko discovered Nardozzi's poetry in the classifieds section typically reserved for "engagements, marriages, births and shout outs to someone turning 40 ('Lordy, lordy, look who's 40')," he writes in his submission.

"I started clipping and saving these poems years ago not really knowing why," he says. "They just seemed interesting to me."

The poems run the gamut: They often address current events like terrorism, texting or, most recently, the royal wedding. They often contain life lessons (on the importance of apology); explanations (what is a mullet?); homages (to his wife, to his father, to the Steelers, to Pittsburgh itself).

"It's hard for me to understand what it is," Yasko says in a telephone interview. "It's not typical of what you think of when you think of poetry. There's a realness to it, and he's not trying to fool anybody."

Readers started noticing, and so did the paper. In 2009, Brian O'Neill wrote a feature on Nardozzi's past, his poetry and his mullet. For Pittsburghers, O'Neill explains, Nardozzi's poetry is divisive: Some love it for its simplicity, innocence and reliability; there's a certain intrigue that it can't be found on Twitter or online, or anywhere else in the country. But others criticize it, almost for the same reasons. Either way, people read it.

Nardozzi himself is a pretty unassuming man, says Yasko, with a simple life and not too many friends. He packs bottles into cases for the Liquor Control Board; he married his high school sweetheart and has three kids; in the '80s, he and his brother used to play rock covers, calling themselves "The Nardozzi Brothers," which might explain his hairstyle. "He wants attention, definitely," says Yasko, "but at the same time doesn't go about it the same way a writer would."

A newer feature to his poetry is a phone number found at the bottom. Nardozzi invites feedback, and often, he gets it. Some call with stories of how touched they are; others call to say it's time for a haircut, O'Neill writes in the P-G. After clipping out poem after poem, Yasko, too, finally decided to call Nardozzi.

Each year, Yasko publishes a small book on a local Pittsburgh writer. Most recently, he featured Nardozzi. "My dream for him is to find a real publisher," Yasko says on the phone. "Since he's gotten this attention, he's become more prolific." You can now find Nardozzi's poetry in the paper every Tuesday — that is, if you live in Pittsburgh.

"He's a real local, underground, DIY legend here in Pittsburgh," says Yasko. Around town you might see Shepard Fairey-style Nardozzi stickers, "What Would Billy Nardozzi Do?" bracelets, et cetera. There's some irony to the cult following, but at its core, there's also a communal admiration for the fixture that Nardozzi has become.

Questions of talent and virtue aside, Nardozzi took matters into his own hands — just to get his words out. And in doing so, he has become legendary, even if just for a small community.

Be sure to check out more stories at Pictory. And stay tuned for more tales of local legends here. Have a photo you want to share? Leave a URL and email address in the comments section, or share in our Flickr group.