There's no DeLorean involved, no "Doc." Irina Werning's time machine is her camera — and her travelers could be just about anyone. Odds are, you've seen her photos; "Back To The Future," as Werning calls her project, has become an internet meme, if not an overnight sensation.

No doubt thanks to StumbleUpon, Reddit and the rest of the share-o-sphere, photos were lifted from Werning's site months ago, and re-posted, re-tweeted, re-"liked" by bloggers and browsers the world over. Traffic to her site was so heavy that for a few days, the page wouldn't even load.

"I guess everyone is just curious to see how they age," Werning says with a shrug. She seems relatively unfazed, maybe slightly overwhelmed, by the response her photos have generated. The Argentinian artist, who stands at about 5-foot-2, began the series by shooting friends and family; thousands of emails later, she just finished a shoot for this month's ESPN magazine. We spent a few hours with her in Virginia; that's where she squeezed in about 24 hours between New York City and London to take Chris Cooley of the NFL's Redskins back to the future.

Preparing for this photo had Werning shopping for a jean jacket, sneakers just like Cooley wore circa 1987 and a royal blue T-shirt (a Miami Dolphins T-shirt, Cooley noticed in disbelief). Her craftiness came in hand at the eleventh hour as she attached letters on the shirt, electrical tape to the shoes and a severed backpack strap to Cooley's jacket literally minutes before the shoot. On the road she travels with a suitcase full of props — and claims her most valuable tool is a roll of tape. Even more valuable is her effortless ability to corral anyone willing to help — with every element of the process, from location scouting to sewing buttons on a shirt.

Finding the photos she wants to re-create is where it all begins. Or rather, usually a photo finds her. "It's either a picture that really strikes me visually or ... a picture that speaks about the person, or has some gesture that I want to re-create in that person — that I think I can bring back to life. It's quite instant when I fall in love with a picture." 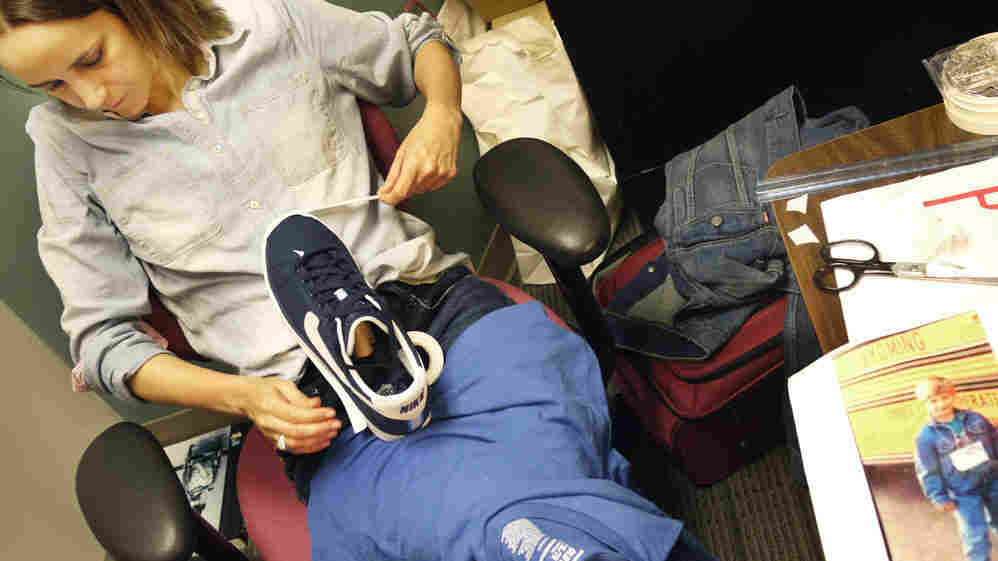 Werning adds white tape to the sole of a shoe so that it appears slightly thicker; she focuses on every detail down to the quarter-inch. Claire O'Neill/NPR hide caption

Werning actually only began photographing within the past few years, save for the blurry photo she took of her brother at age 10 (and re-created last year). Her love of photography is probably more accurately described as a love of old photos. The inspiration for this series was an ordinary, blurry photo of a woman that, for whatever reason, intrigued Werning. Now, she receives dozens of requests from around the world each day; total strangers seem more than willing to share their stories, and invite Werning into their lives. And she's more than willing to accept.

A before-and-after photo from Werning's upcoming series, Back To The Future II

There is, of course, some mystery as to how an artist can afford to travel the world, surfing couches, meeting strangers, taking everyone along on her time-travel adventure. She lives simply, luckily able to borrow money for the time being ... hoping that one day, it will pay back. For now, she's able to be in it for the fun. "I enjoy seeing the person dressed like that, posing. ... It just makes me laugh. That is the motivation."

Through the process, she's learning more about herself. "My self image is that I am a very chaotic person and very disorganized," she says. That much is apparent in her cluttered suitcases full of props and her blithe attitude. Yet somehow, miraculously, it all comes together in the final product. "I feel like I am an obsessive person, and I never realized that before."

And the Web world has responded with what amounts to a resounding virtual applause. Dedicated followers are murmuring that a second series is in the works, which is true, if Werning can ever slow down. Currently in Denmark, she updates in an email: " ... it's just that it's too exciting to stop."

Music from the video courtesy of YACHT