Accessibility links
What's With The Hot Pink In Baghdad? : The Picture Show On assignment for National Geographic magazine, photographer Lynsey Addario went back to Baghdad for the first time since 2004. She discusses a motif that appears in her photos — and the remarkable changes she saw afoot.

What's With The Hot Pink In Baghdad?

What's With The Hot Pink In Baghdad?

Iraq War veteran and award-winning poet Brian Turner recently returned to Baghdad for the first time since 2004, this time as a tourist. "I wanted to learn about the place where I'd been, but without a weapon in my hand," he tells Morning Edition host Steve Inskeep. 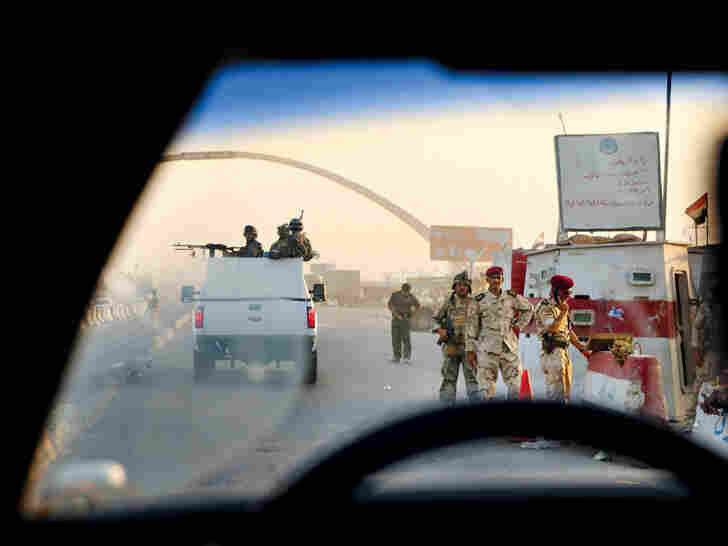 Turner reflects on his travel experience in the July issue of National Geographic, remarking how the city has changed: "The sounds of war have been replaced by the sounds of children playing soccer on the grass."

Photographer Lynsey Addario also went, capturing signs of renewal and growth — like lavish weddings and bustling street scenes. She responded to a few questions about her photos. No. 1 being:

What's with all the hot pink?

Lynsey Addario: The hot pink motif wasn't intentional! Must be a favorite color of the Iraqis these days! But also when we edit, we select images that flow nicely together, and often color and composition influence that selection.

You're not a veteran like Turner, but you do have your own experiences in Iraq.

Yes, I spent most of 2003-2004 in Iraq for The New York Times and Time magazine. I was in the north before Saddam fell, and in early April 2003, made my way to Kirkuk, Mosel and finally, Baghdad, where I stayed for most of the next few years covering the country in part from the perspective of civilians, with occasional embeds.

What were your impressions upon returning?

When I visited Baghdad for the last time in 2004 before starting this story, the country was really in demise: There were daily explosions, civilians and soldiers were being killed in large numbers, and kidnappings had just begun (I, myself, was kidnapped outside of Fallujah in April 2004).

When I returned last October-November for the first time, I was amazed at how life really was returning to Baghdad. ... Actually, very emotional, because I felt like I had watched the country go from incredible euphoria when Saddam fell, to disillusionment ... to the country falling into chaos, and a gradual breakdown of security all around.

Any stories or experiences from this trip that made a lasting impression on you?

I think the overall feeling of hope returning to Iraqis that they can start to live their lives again. There are weddings everywhere, people out and about, and people are tired of compromising their lives for violence. ...

It was absolutely incredible for me to see people swimming at Lake Habbaniya, in the middle of the Sunni Triangle — a place that was full of insurgents for years, and now is full of families swimming, jet-skiiing, laughing. That was particularly memorable.

Shortly after reporting this story for National Geographic, Addario went from South Sudan to Iraq to Afghanistan to Bahrain to Libya. In Libya, she was kidnapped along with three other New York Times reporters in March, but is now safe and headed to Afghanistan again.