Accessibility links
Magnum Photographer Elliott Erwitt Honored With Lifetime Achievement Award : The Picture Show It might be the one household name you don't know but should. At 83, Erwitt is still making memorable photographs. 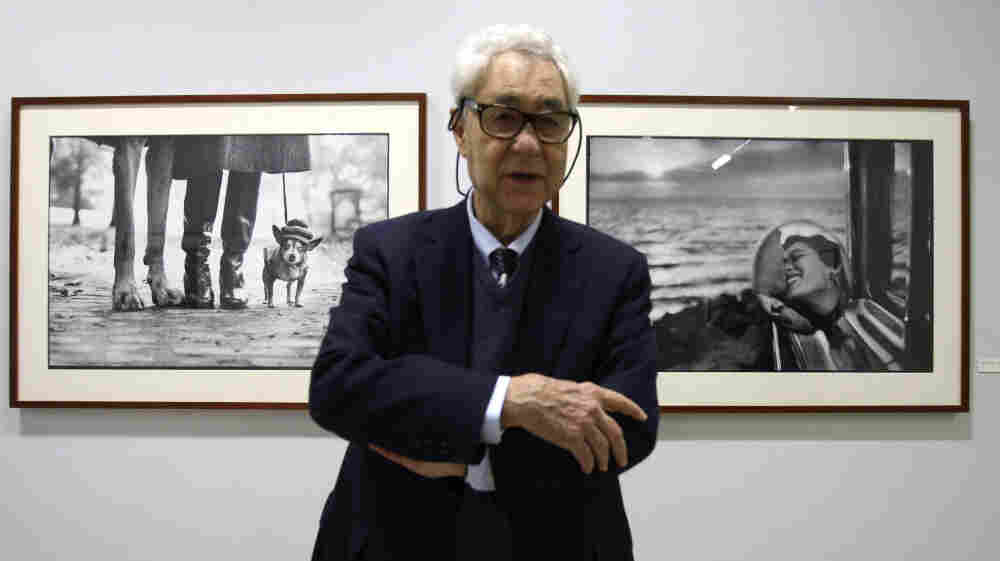 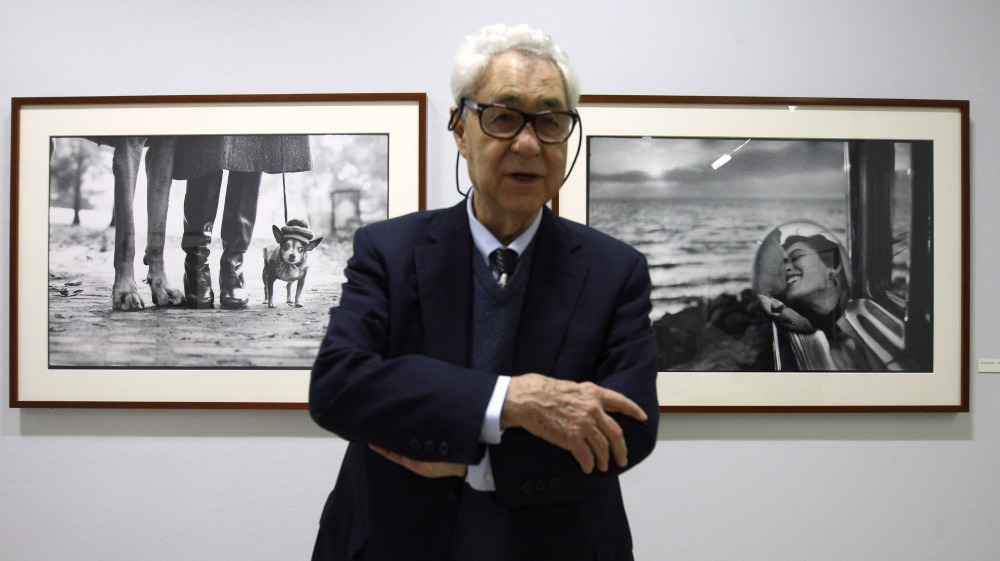 Elliott Erwitt poses during the press visit of his exhibition "Personal Best" in Paris, 2010.

Photographer Elliott Erwitt loves babies, bare bottoms and dogs — specifically, jumping dogs. And he'll go to great lengths — however unorthodox — to get the shot. To get a dog to jump? Bark at it, Erwitt says: "You have to speak their language. ... Sometimes they bark back, sometimes they jump." But it's a perilous approach. "Once, one of them peed on my leg as a consequence," he says.

Erwitt's novel approaches to getting the shot have paid off. In May, the International Center of Photography gave him a Lifetime Achievement Award. And a show of his works in New York celebrates some Erwitt images that have a permanent home in our mind's eye.

Erwitt became a professional photographer — commercial and photojournalism — in 1950. And he's still at it. He recently turned 83 — and naturally took photos at his birthday party in East Hampton.

"I took a picture of somebody barbecuing," he says. How did it turn out? He doesn't know yet: "It's still in the camera." Erwitt uses film, mostly black and white. He rarely crops, and never manipulates an image electronically. He composes in the camera. Some of his photographs, over the years, have become classics.

One such classic, taken in New York City in 1953, is a photo of firsts: "That picture is of my first wife, my first child and my first cat," Erwitt says. Baby Ellen Erwitt was only 6 days old, lying on her belly on the bed, bare-bottomed. The cat, Brutus, sits near her feet. The wife and new mother rests at the corner of the bed, gazing lovingly at her child.

"It's the only frame on a roll of photographs," Erwitt says. That spontaneous family snapshot — that was chosen for a ground-breaking 1955 photography exhibition at the Museum of Modern Art; "Family of Man," an exercise in international humanism, was curated by Edward Steichen. Erwitt's simple, moving black-and-white personal family picture has had a long public life.

"It's been used as an illustration for the last 57 years, and it still gets used," he says. "It put my daughter through college." Amazing longevity, when you consider how many photographs of mothers, babies and cats have been brought into this world.

If your subjects are eternal ... they'll survive.

The only color picture in the New York exhibit was taken more recently, on Jan. 20, 2009, at one of the inaugural balls. Newly sworn-in President Obama and the first lady wave to the crowd from a brightly lit stage. All across the bottom half of the photo, the crowd waves back, with a sea of upraised illuminated smartphones.

"It's an illustration about the use of cameras these days," Erwitt says. Inaugurals, graduations, birthday parties, backyard barbecues — everybody's taking pictures. Too many? "All you need is a pencil and a piece of paper to write a novel, don't you?" the Magnum photographer answers with a wry smile. But he points out that "not even with a very good pencil" will those novels necessarily become the next War and Peace. The same for photographs. 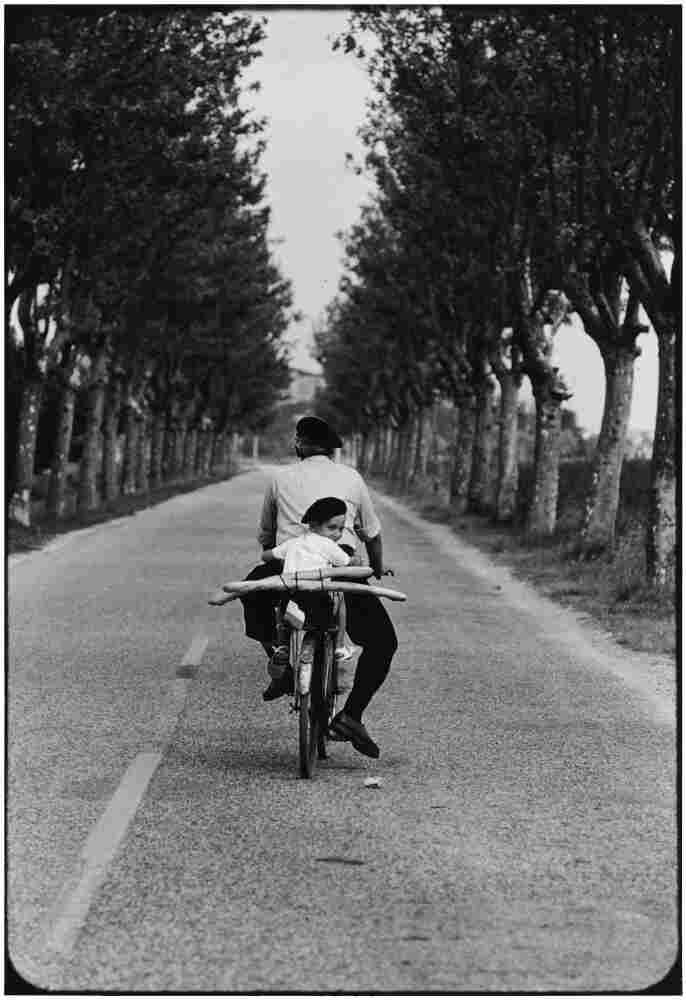 Another classic image in this show of more than 100 of Erwitt's favorite photographs was taken in 1955, on assignment in France. It shows a long country road, lined on both sides with trees. A man in a beret, with a little boy behind him, peddles a bike down the road. Their backs face us. Tied to the rear of the bike are two long, skinny baguettes.

The picture was taken for a French tourist campaign — Erwitt did a lot of tourist jobs in the 1950s and '60s for countries and for airlines. He had a great deal of artistic freedom on those commercial assignments. "In those days, there were no focus groups to decide what you should do," he says.

It was up to the photographer, and his or her eye. Today, Erwitt says, ad agencies and clients tell commercial photographers exactly what they want, before the camera sees anything. The Suits may have found a bar they like, and want it shot from various angles. Period. With such specific constraints, it's hard to capture that spur-of-the-moment baby or baguette. Erwitt has a theory about timelessness. 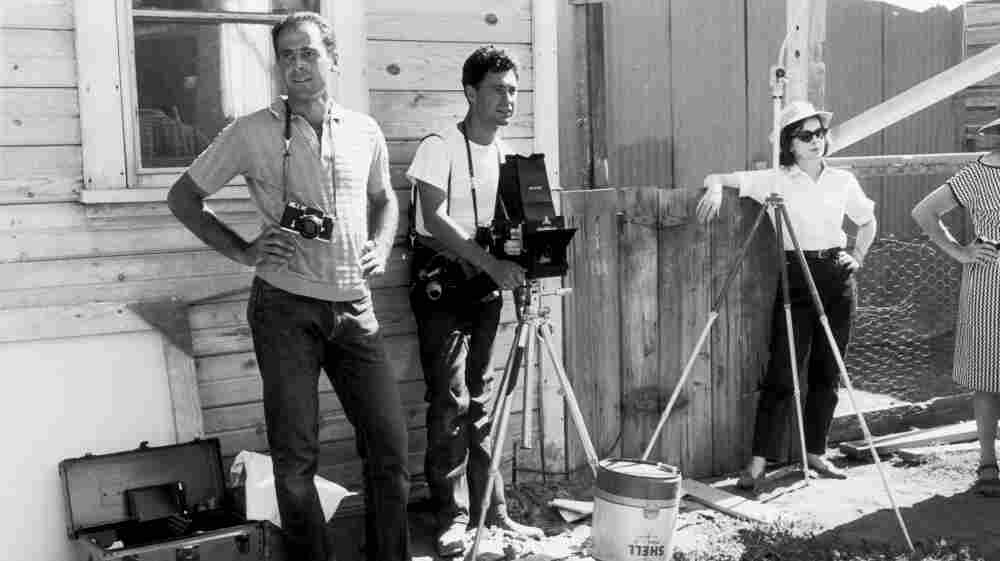 Magnum photographer Elliott Erwitt (center) and his colleagues during the filming of The Misfits on location in Nevada, 1960. Ernst Haas/Getty Images hide caption 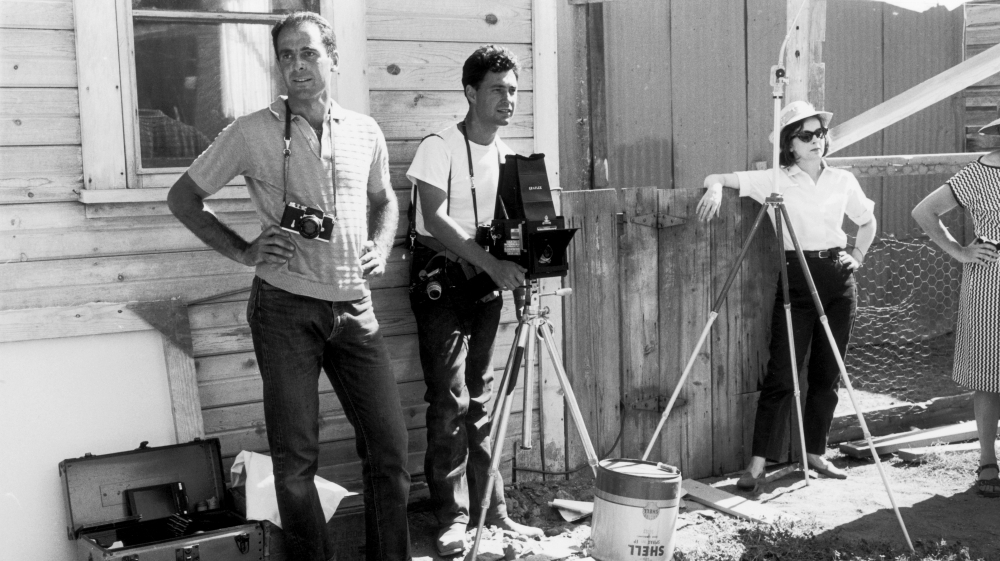 Magnum photographer Elliott Erwitt (center) and his colleagues during the filming of The Misfits on location in Nevada, 1960.

"If your subjects are eternal ... they'll survive," Erwitt says. "If they're good enough. If they're not dated, they will survive."

Another lasting black-and-white picture from years back — the fall of 1963 — presents a dark moment in the nation's history. Erwitt took the photo at a new gravesite in Arlington National Cemetery. The just-widowed Jacqueline Kennedy stands holding a folded American flag. A dark veil shrouds her agonized face.

"The sadness of the widow, of the brother ... it's all there, Erwitt says." You can even see a tear if you get close, stuck on the veil."

It's a devastating and intimate photograph of a woman — normally so majestic and controlled — who, in this moment, becomes a broken, grieving wife. Even all these decades later, Erwitt doesn't feel it is an invasion of privacy for a professional photographer on assignment to have preserved this moment on film.

"I don't think it's voyeurism," Erwitt says. "Covering a historic event is perfectly legitimate. It's not sneaking into somebody's boudoir. ... These people belong to history, and not to record that if you have the opportunity would be wrong."

Erwitt's pictures are on exhibit at the International Center of Photography in New York through Aug. 28. The day after this interview, he went off to Scotland on assignment for a whiskey company. "Just get atmosphere," they told him. When you're Elliott Erwitt, you get lucky sometimes.

Previous text and audio versions of this story misidentified the curator of the 1955 photography exhibition "Family of Man" at the Museum of Modern Art as William Steichen. Edward Steichen was the curator.