Accessibility links
Photographer Captures Plight Of The Tiger : The Picture Show Fewer than 3,200 tigers exist in the wild. Photographer Steve Winter traveled to Asia to document their perilous situation.

Listen to a Tiger Call for Her Mate (Hans Weise, National Geographic)

Photographer Captures Plight Of The Tiger

Photographer Captures Plight Of The Tiger

Listen to a Tiger Call for Her Mate (Hans Weise, National Geographic)

Showcasing the perils that tigers face today was a challenging assignment for National Geographic photographer Steve Winter — but not for the reason you might think.

Sure, it's scary walking into the world of killer carnivores, but the seasoned photog has been in many dangerous situations before. Actually, Winter was preoccupied with how he was going to capture compelling photos of an animal that everyone seems to have grown desensitized to. The result appears in National Geographic's December issue.

His answer? Show all sides of the story: The extinction, the threats, the protection and the promise of resurgence.

Fewer than 3,200 tigers exist in the wild today, a result of poachers and habitat loss. The animal is sought for its valuable bones, penis and pelt — mostly for traditional Asian medicines. As director of media for the conservation group Panthera, Winter is passionate about all large cats and works hard to protect them.

With the help of guides and camera traps, he snapped away for two years on a grant from National Geographic's Expeditions Council. The Picture Show leaped at the chance to talk with Winter about his images.

The Picture Show: Can you talk a bit about this assignment?

Steve Winter: "My job was to show the diverse issues surrounding tigers today and show what is being done for their future. But how do I walk out the door and show readers something completely different? My job is to excite people again with an animal we see all the time.

"I think there's a future for tigers, but it was time to bring the issue back to the public and find some images people might not have seen — something that might ignite a spark in the next generation and let them know there is hope."

Why choose these locations?

"The next tiger to go extinct could be the Sumatran tiger. I knew we had to go there. I also went to Thailand. Those tigers are coming back from the brink of extinction. But the [heart of the story] was India. It's the only place you can actually go and see tigers. Many reserves are set up for tourists there."

Do any of these photos stand out to you?

"We learned a zoo tiger had been killed. Its bones and pelt were taken, but the entrails were left. How do you illustrate an empty cage? You're trying to illustrate the fact that someone had the audacity to murder an animal. They murdered this tiger under the noses of everyone. 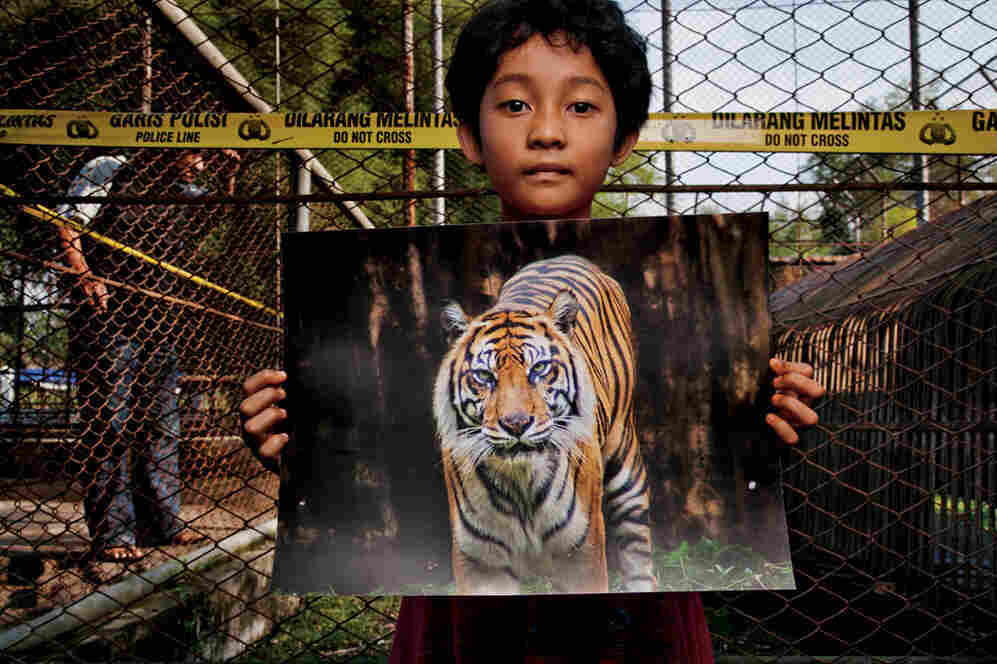 Dara Arista, 8, holds a photo of Sheila in front of the tiger's cage at the zoo in Jambi, Indonesia. Poachers had slaughtered Sheila during the night. Steve Winter/National Geographic hide caption 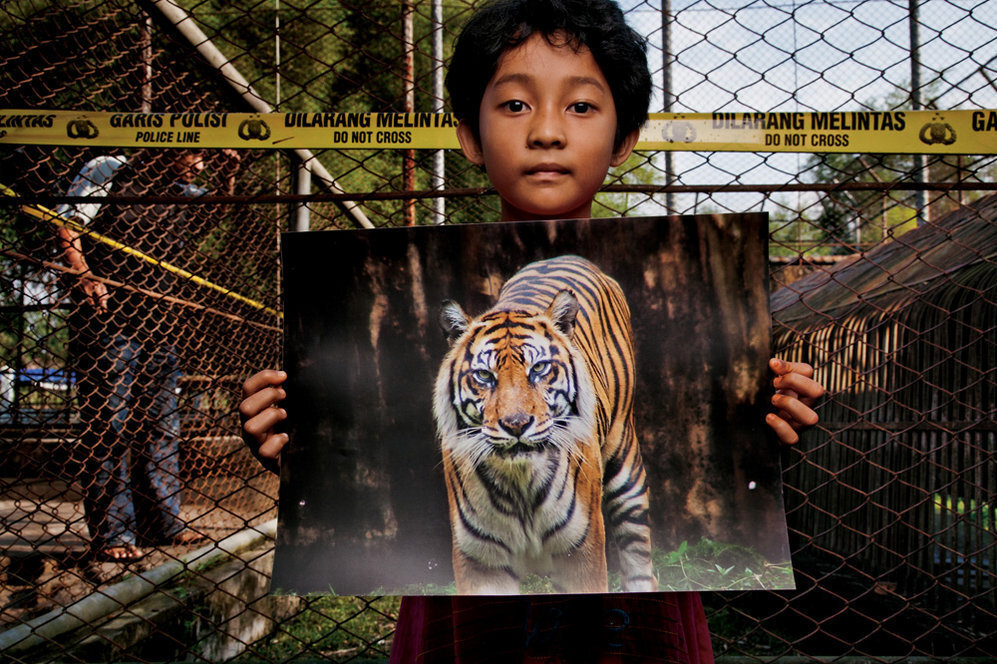 Dara Arista, 8, holds a photo of Sheila in front of the tiger's cage at the zoo in Jambi, Indonesia. Poachers had slaughtered Sheila during the night.

"Two days later, we were at the zoo on a Sunday, and here's all these children coming to see the tiger. I asked this little girl to hold this picture up of the tiger. There was still blood in the cage.

"The picture illustrates what's worth more dead than alive. Tigers have to have a value in our society. They have to be worth more alive than dead. That was one of the most disgusting representations of humanity that I've ever seen."

Did they catch the poacher?

What's one thing Panthera is doing to help tigers?

"We look at large landscapes for tigers to live, not just pockets. The adults have to leave when they get older. If there's not a safe place for them to travel through, they could be taken out by poachers or by retaliation from angry villagers. We need to give them the opportunity to walk a safe corridor to a new place.

"Panthera set a goal to increase tiger numbers in key spots by 50 percent over 10 years."