Accessibility links
Russia By Rail: Getting Into Hot Water : The Picture Show Passengers on the Trans-Siberian Railway gather to make tea, coffee, oatmeal, soup, pasta or anything instant whose preparation demands hot water.

Russia By Rail: Getting Into Hot Water

Russia By Rail: Getting Into Hot Water 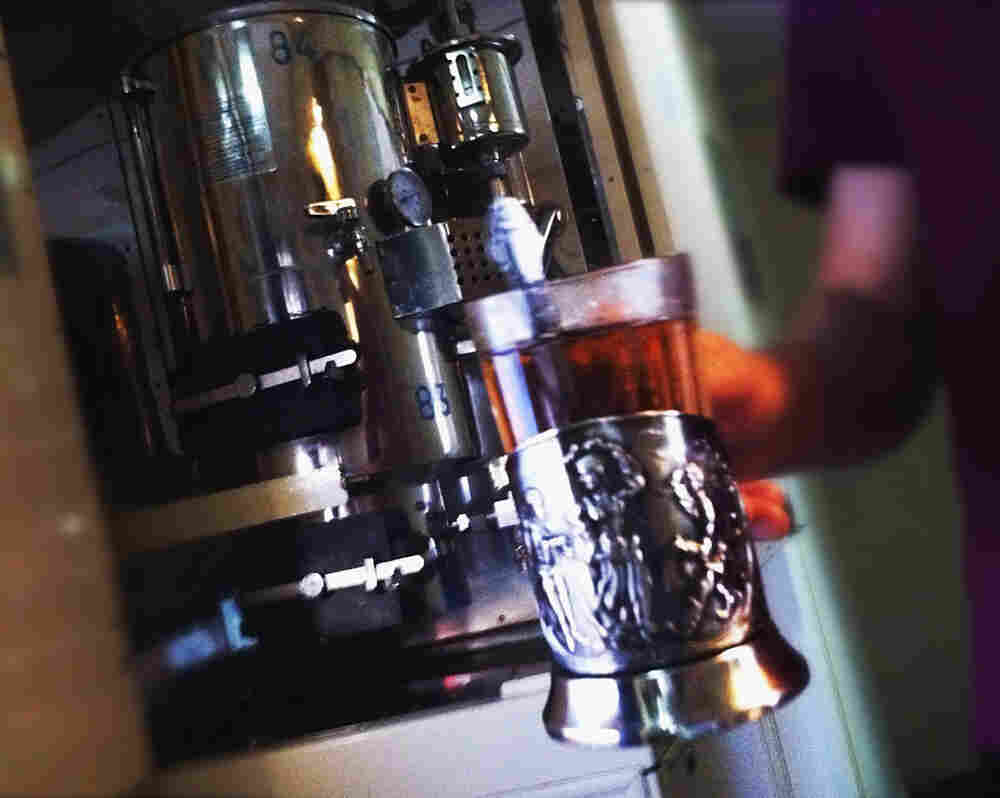 The hot water boiler on the Trans-Siberian Railway is a social gathering place, as well as a convenient way to prepare tea, coffee, oatmeal or instant meals. David Gilkey/NPR hide caption 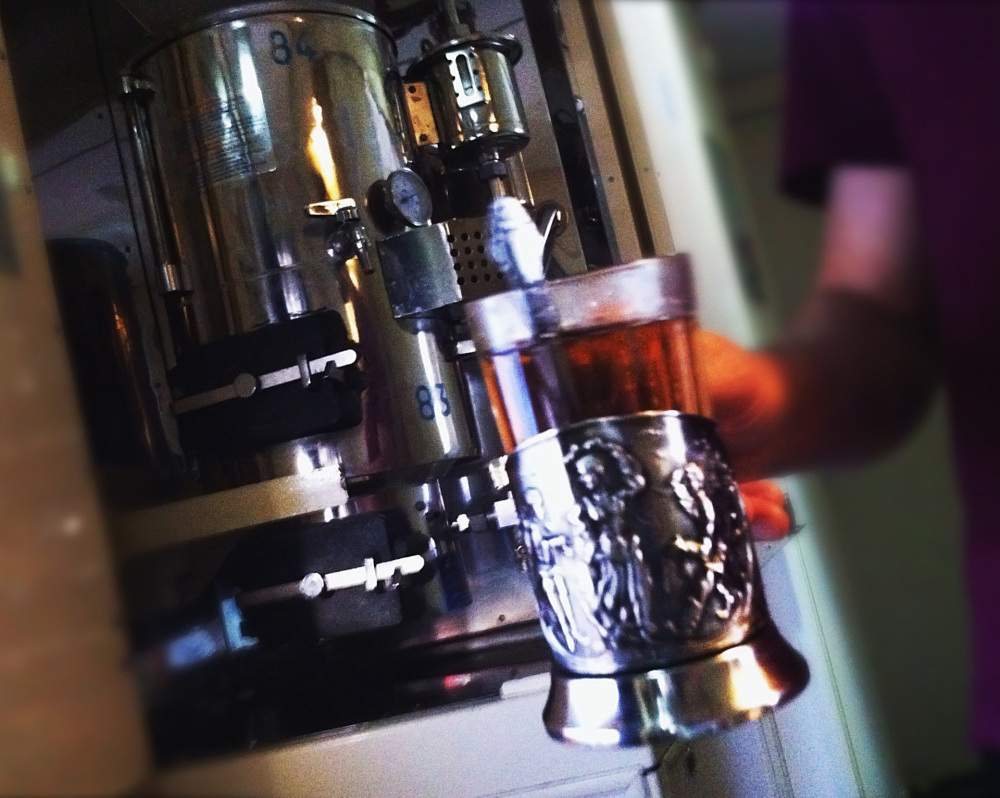 The hot water boiler on the Trans-Siberian Railway is a social gathering place, as well as a convenient way to prepare tea, coffee, oatmeal or instant meals.

In American offices, it's the water cooler.

On Russian trains? The boiler.

It's where passengers gather to make tea, coffee, oatmeal, soup, instant pasta or instant anything whose preparation demands hot water.

The boiler – standing proud and tall near the train attendant's compartment in each rail car – is a metal canister keeping water scalding and available at any hour.

Occasional passengers - including myself - refer at times to the appliance as a "samovar."

But this risks offending traditionalists.

It is, after all, an industrial-looking thing resembling a beer keg. Russians reserve "samovar" for the older, more decorative antiques that are heated by firewood (the train use some electricity). Classic samovars heat water for tea, the lifeblood for many Russians. Suggesting that a samovar be used to make instant soup would be blasphemous to this country's tea connoisseurs. 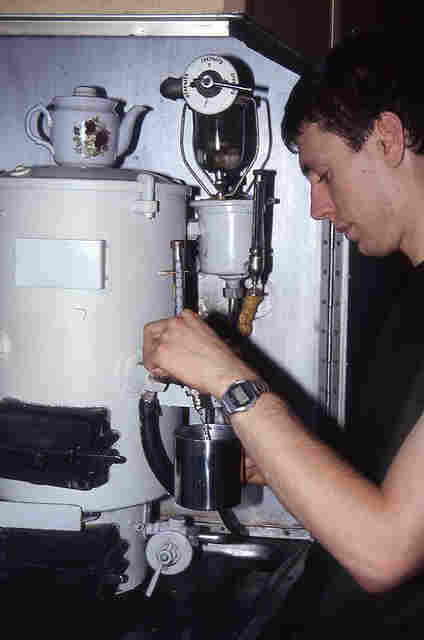 A man gets water from a boiler on the Trans-Siberian railway in this photo from 2007. sloneczna.pictures via Flickr hide caption

Lesson one was proper nomenclature. Lesson two? That train life would not be nearly as tolerable without the boiler.

I would say I visit about a dozen times a day.

It's a social place. One morning during our journey, my colleague, Sergei Sotnikov, and I arrived at the same moment and discussed how Siberia's Lake Baikal appeared majestic out the window – it's a place he and I had visited on a reporting trip last year.

The boiler brought us together.

One reason it's such a popular place is that alternative dining options on the train are less reliable.

Russian dining cars have a small bar and perhaps eight or so booths on either side of an aisle. Some curious but intoxicating music is usually playing – anything from Russian dance to the Gipsy Kings.

It's a comfortable place with an endless menu – think New Jersey diner.

Trouble is, nothing is ever available.

The enjoy-reading-the-menu-but-then-we-will-tell-you-the-three-items-we-actually-have problem still exists at many restaurants, just as it did in Soviet times.

But it's especially prolific on Russian trains.

It's not that the food is bad. I've thoroughly enjoyed the "Tsar's Soup", a vodka-based broth with chunks of trout. I've found the chicken smothered in cheese and sour cream tasty.

And you can excuse a restaurant that's on the move for days at a time for not being fully provisioned.

But the scarcity of choices, and the high menu prices ($11 for the chicken plate), convince most passengers to bring their own food – bread, sausage, cheese – and also rely on the boiler.

There's a food cart carrying sodas, juice and beer. The woman driving it from one rail car to the next is a bit intimidating. She moves fast, with the bottles in her cart rattling wildly.

The cold, ice-covered metal ramps in between cars are no match for her. She seems to view those encounters as if she's in a monster truck rally, bouncing her vehicle over mounds of ice, loudly announcing her arrival in your rail car with an orchestra of clanking glass.

I've so far decided not to purchase one of her pressure-packed bottles of beer or soda.

She roams the train selling potentially delicious Russian pies, filled with onion or cabbage. This is a special treat, a delicacy I've enjoyed on many occasions during my two years in Russia.

But I'm not buying any more from Natasha.

The route of the Trans-Siberian railway from Moscow to Vladivostok. Alyson Hurt/NPR hide caption

The route of the Trans-Siberian railway from Moscow to Vladivostok.

Shortly after boarding this 60-hour train from Yekaterinburg to Ulan Ude, Natasha visited our compartment and offered her pies. On other trains, they've cost 30 rubles or so – about a dollar each.

Natasha suggested we give her 400 rubles, and she would give us a "gift." Without thinking, and eager to make pleasantries with the train staff, I handed her the money and she proceeded to unload her entire plate of pies onto the table in our compartment.

She thanked us. We thanked her. And then she was gone.

The pies were cold. And lacking in onions and cabbage.

We had just been given not only a day-old batch of pies, but according to fellow passengers who've seen this trick before, we were the proud owners of pies made in Natasha's kitchen after she ran out of filling.

On this train, at least, I'm sticking happily to the boiler.