The funeral procession of Kim Jong Il brought back memories of an era when images of Communist propaganda were ubiquitous. The visual backbone of the images or illustrations were usually order and symmetry, enacted on a grand scale.

Wednesday's event was no exception. An overall view of the snowy procession had it all: the framed image of Kim Jong Il in the foreground, the masses of mourners lined neatly on the sidelines, the motorcade in perfect sync and the order that is associated with a totalitarian regime — a regime with access to Photoshop. 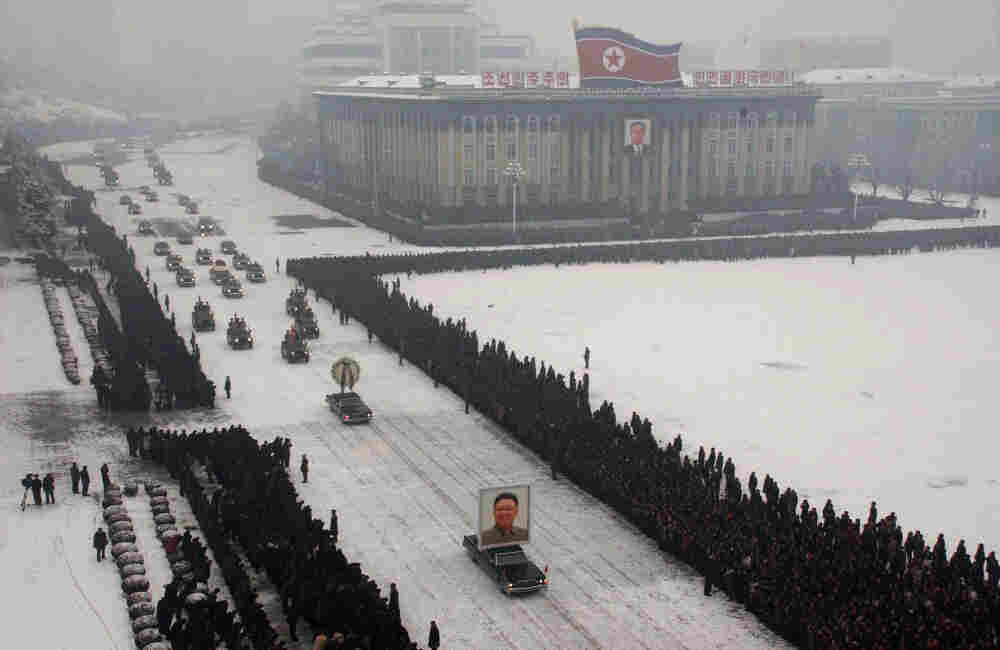 This image, released by Kyodo News and originally transmitted via the Associated Press, shows a cluster of mourners on the left-hand side of the frame. Kyodo/Landov hide caption 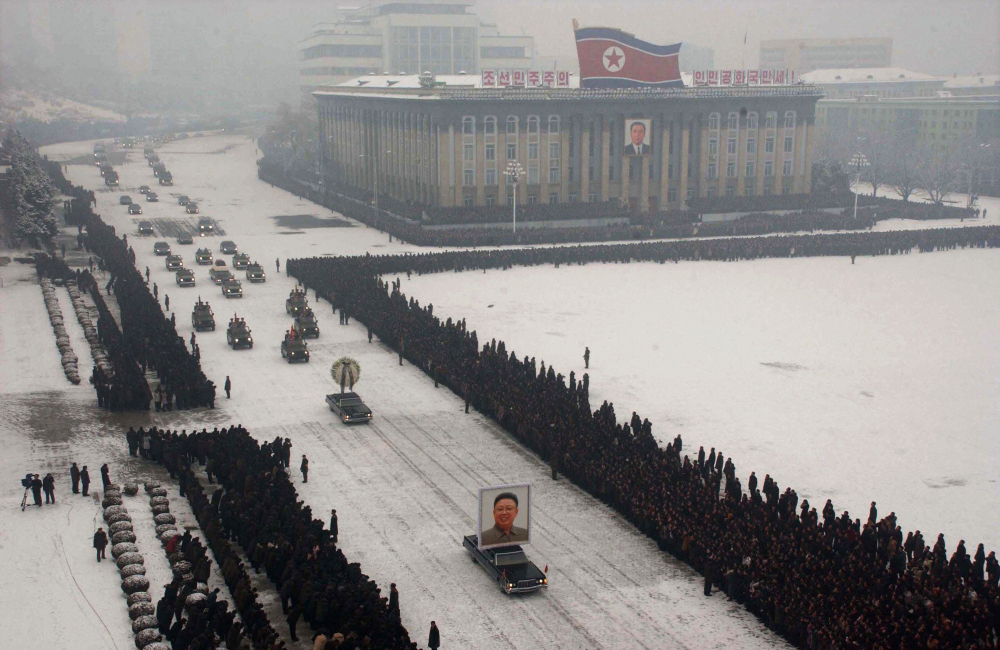 This image, released by Kyodo News and originally transmitted via the Associated Press, shows a cluster of mourners on the left-hand side of the frame. 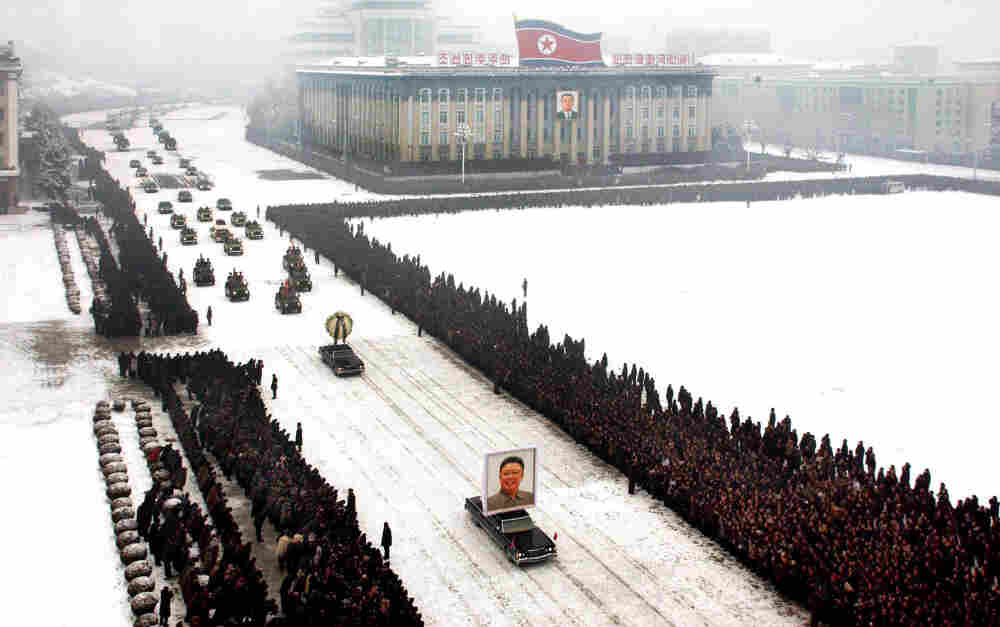 This image, released by the North Korean Central News Agency, was taken within seconds of the one above. An analysis shows that it was digitally altered, removing the cluster of men on the left edge and enhancing the perfect line of mourners. KCNA/EPA /Landov hide caption 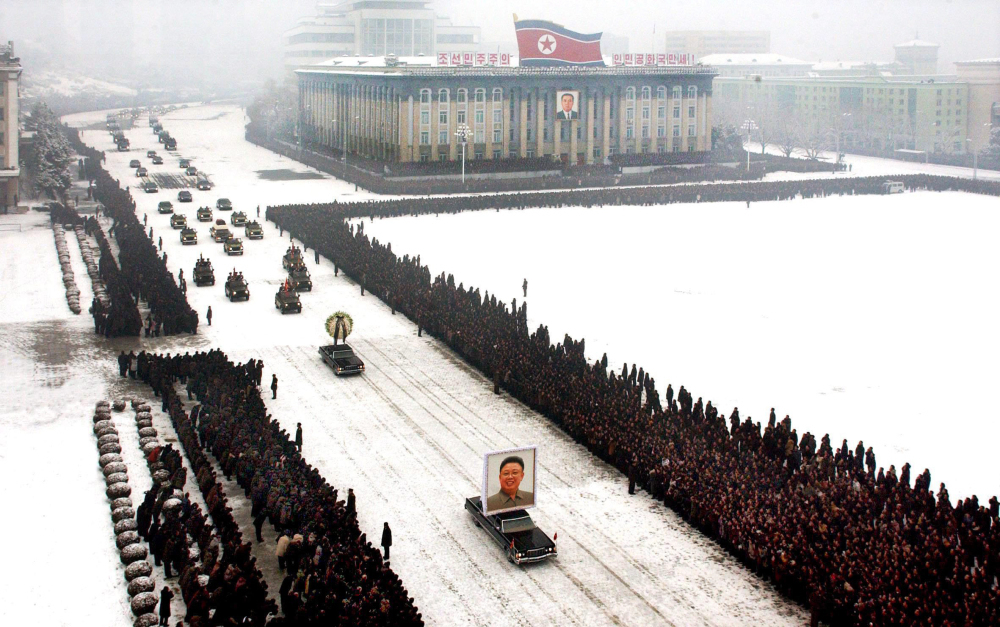 This image, released by the North Korean Central News Agency, was taken within seconds of the one above. An analysis shows that it was digitally altered, removing the cluster of men on the left edge and enhancing the perfect line of mourners.

The photo of Kim Jong Il's funeral procession was released Wednesday by the North Korean Central News Agency, and distributed by the European Pressphoto Agency, Agence-France Presse and Reuters. All three international agencies later issued a "kill" notice on the photo.

As reported by The New York Times' Lens blog, the Associated Press noticed the infraction by comparing it with a similar image released by Kyodo News, a Japanese agency. The two images were taken seconds apart, revealing what's clearly a photographic infraction by the North Korean news agency.

Viewing the images side by side, it is apparent that the editors at the North Korean Central News Agency took issue with a cluster of people on the far left-hand side of the frame. They have been digitally removed and their tracks covered with cloned snow. The position of the car is proof that two images were indeed taken within seconds of each other, leaving little time for the men to physically move out of the frame. The Times' detailed analysis of the two images and the botched Photoshop attempt can be read on the Lens blog.

While some may argue the insignificance of the edit, Bob Steele, a journalism ethics professor at DePauw University, says the bottom line is that the truth has been altered. "In this case, it is a fairly minor detail that has been changed," Steele tells NPR, "but it tells us that there is the potential for the alteration of truth in other photographs, or in any account of the story."

He adds that although the image came from an isolated nation, often the target of global skepticism, the seriousness of the matter should not be trivialized and that the manipulation of a news image from any country should not be condoned.

"To digitally alter a news photograph in a way that changes reality and deceives the public is ethically wrong," he says.

Steele recalls another notable Communist image that was altered — but this one was taken nearly 91 years ago. The original image, made in 1920, captured Russian leader Vladimir Lenin speaking to a crowd in Sverdlov Square in Moscow. In the altered image, said to have been taken within seconds of the original, fellow Central Committee members Leon Trotsky and Lev Kamenev, who were standing next to Lenin's podium, suddenly disappeared and were replaced with a staircase.

In 1998, Hoover Digest, a Stanford University publication, published an article titled Inside Stalin's Darkroom, in which writer Robert Conquest states that history's most egregious violations of photographic manipulation occurred during the Russian Revolution, when "there [was] something especially striking about the way in which the Soviet visual images were massively and pervasively amended."

This "visual revisionism" tried to keep up the facade of a flourishing nation that was actually mired in poverty and ruled by terror.

North Korea, too, has a facade to maintain: that of a nationalistic people who are happier than their neighbors in the South.

By late Wednesday evening, the European Pressphoto Agency had directed its clients to take down the altered image, stating: "We have since been made aware that the image has been altered by the supplier and the image was moved in error. We apologize for any inconvenience."

Steele argues that this situation should be a warning bell for all news organizations and citizens.

"We must recognize how easy it is to alter reality; when it comes to journalism and documentary photography, there must be an assumption that authenticity and truth are guiding principles. If we don't have that, then we don't have trust. And if we don't have trust, we have a breakdown in communication within society."

Ironically, the minor alteration in the larger scheme of the elusive North Korean story could heighten the cynicism of the outside world toward the isolated state, possibly having the opposite effect of that desired by its manipulators.