Accessibility links
The Art Of Finding A Photographic Voice : The Picture Show For photographer Michael Crouser, it took decades in a darkroom and fifteen years with bullfighters to find his voice.

The Art Of Finding A Photographic Voice

The Art Of Finding A Photographic Voice

"I do think that my best pictures are a reflection of myself," he says on the phone Friday. And he's kind of obsessed with that idea — in a good way.

Crouser first picked up a camera at age 14, which means he has had plenty of time to develop a signature style. And in the photos now on display at New York City's Leica Gallery — at a solo, midcareer show — that signature style is clear. From his earliest photos to the most recent, it's almost completely consistent.

Splitting time between Minneapolis, where he was born, and Brooklyn, Crouser teaches classes about "finding your voice" in photography. It boils down to part trial and error, part instinct, he explains.

He offers an analogy: "I don't think that musicians always have a choice in the kind of music that they make. The style sort of presents itself once you've been experimenting."

If you're a musician, you start by learning the technical, the techniques. You memorize chords until your hands move involuntarily. And then, if you're lucky, something unique emerges on its own when you least expect it.

The same applies for Crouser but with a camera and a darkroom. It took him years and years to develop his photographic voice, and throughout his career he has stuck to film, mastering the artistic techniques of toning, dodging and burning inside the darkroom. 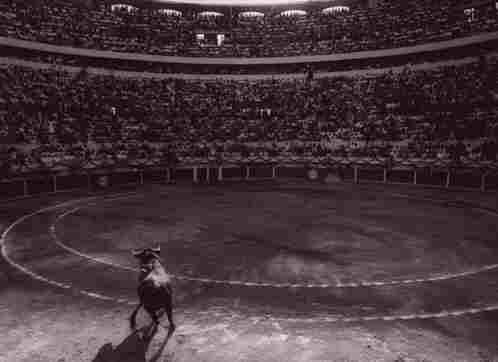 Crouser's commitment to a style and to his subjects is exemplified in the series Los Torros — a 15-year study of bullfighting in Europe, Mexico and South America — and in his most recent project, an ongoing body of work about ranchers out West, which is already six years in the making.

"Nobody else could have made these pictures," Crouser says in a modestly musing tone — meaning the photos are uniquely him, and he is the photos. And, like his work, that's beautiful.

Michael Crouser: A Mid-Career Retrospective is on display at Leica Gallery in New York City through Feb. 25.