Accessibility links
India's First Female Photojournalist Captured A Nation In Transition : The Picture Show Homai Vyarawalla's black-and-white images poetically documented monumental moments in India's history, such as the first flag raising, the departure of British Viceroy Lord Mountbatten and the funeral of Mahatma Gandhi, as well as notable dignitaries who passed through Delhi. She died at age 98.

When I told my loving Indian parents I wanted to pursue a career in photojournalism, let's just say they weren't over the moon. Their immigrant dreams of producing a lawyer or doctor were replaced with images of an idealistic artist filled with wanderlust. I was young enough and stubborn enough to follow my convictions, but it took nearly a decade for them to appreciate my unconventional path.

Little did I know that Homai Vyarawalla had already blazed this trail, decades before I was born. 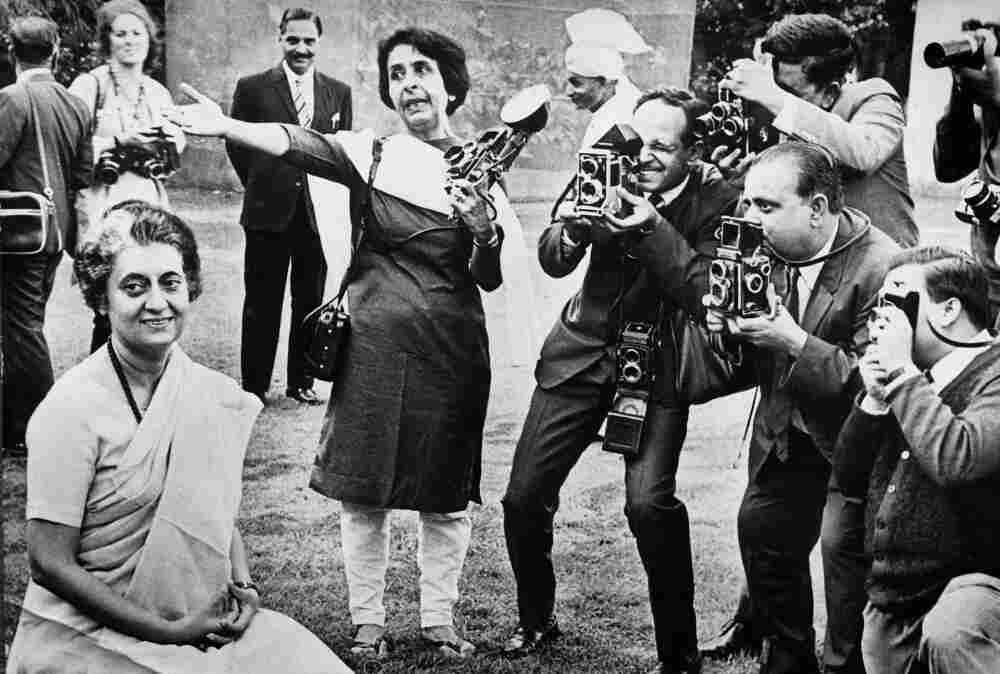 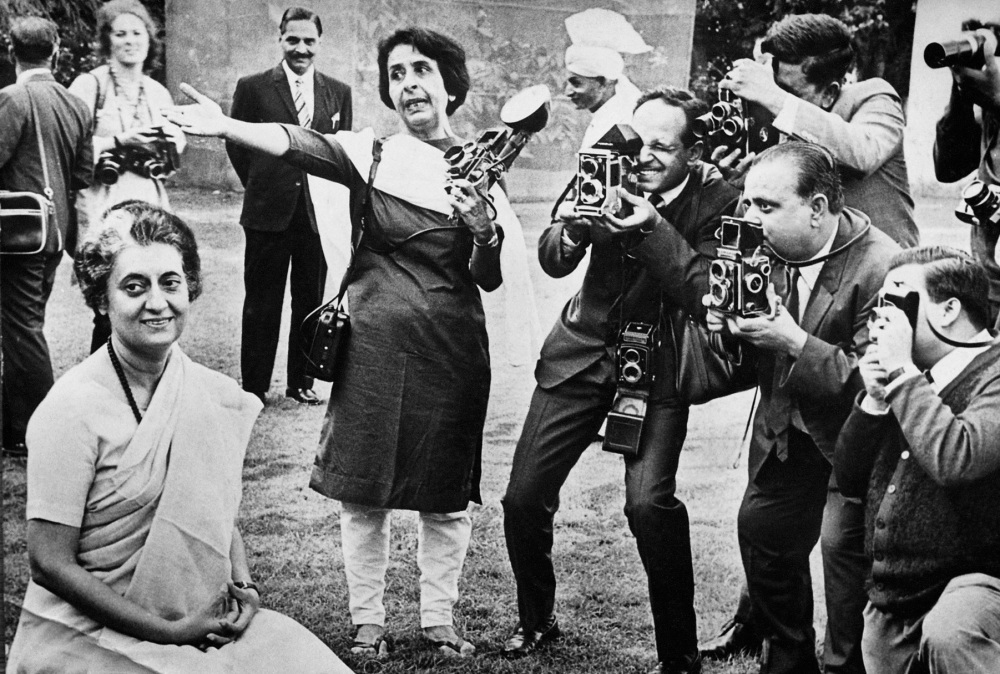 Vyarawalla, affectionately referred to as India's first female photojournalist, died last weekend, leaving behind four decades of imagery documenting India's independence and the transition that followed. She was 98.

Upon word of her passing, India's news media hailed her "iconoclast life," citing her keen admiration for Jawaharlal Nehru, her favorite subject. "He was [India's first] prime minister," she recalled to Rediff.com's reporter Sanchari Bhattacharya in March 2011, "the highest authority of the country. ... Plus he was very photogenic." The Times of India called her "the grand old lady" and mentioned her numerous accolades, including the Padma Vibhushan, India's second highest civilian honor, bestowed on her in 2010.

Born to humble Parsi parents in December 1913, Vyarawalla was the daughter of a theater-director father and a mother who ironically steered her away from a career in medicine. "She had seen doctors on late-night shifts and didn't want me in a profession like that," Vyarawalla recounts in a retrospective book of her work titled Camera Chronicles of Homai Vyarawalla. "Little did she realize that press photography would be far worse!"

In a career that spanned more than four decades, Vyarawalla stood, often the lone female photographer, on the front lines of a tumultuous transition from colonial rule to independence. Draped in a sari and lugging heavy photographic equipment, she photographed in an era when the media had unprecedented access and an ongoing camaraderie. "All of us helped each other," she said of her male counterparts. "If someone was changing film, he would request another photographer to take an extra picture for him. We even traded negatives so that no one missed out on a good picture."

Vyarawalla's black-and-white images poetically captured monumental moments in India's history, such as the first flag raising, the departure of British Viceroy Lord Mountbatten and the funeral of Mahatma Gandhi, as well as notable dignitaries who passed through Delhi, such as Jacqueline Kennedy, President Dwight D. Eisenhower, Dr. Martin Luther King Jr. and Coretta Scott King. She had the rare distinction of knowing her high-profile subjects intimately and never exploited that relationship. "They were comfortable with me because they knew that I would never ridicule them," she said.

In 1966, when Indira Gandhi became India's prime minister, the rules had suddenly shifted. Until then, Delhi photographers were able to gain intimate access without much effort. "I have taken photographs of presidents and prime ministers as close as 5 feet. We were never considered a security menace. From Indira Gandhi's time, we had to stay at least 15 to 20 feet away while taking a picture," noted Vyarawalla.

It was then that she decided she had done enough, feeling uninspired by the nation's cynicism and leadership. "People changed. That graciousness and that dignity were just not there. When the graciousness was gone, my interest in photography was gone as well," she said. She retired in the early 1970s, soon after her husband of 43 years died, moved away from Delhi and locked up her cameras. 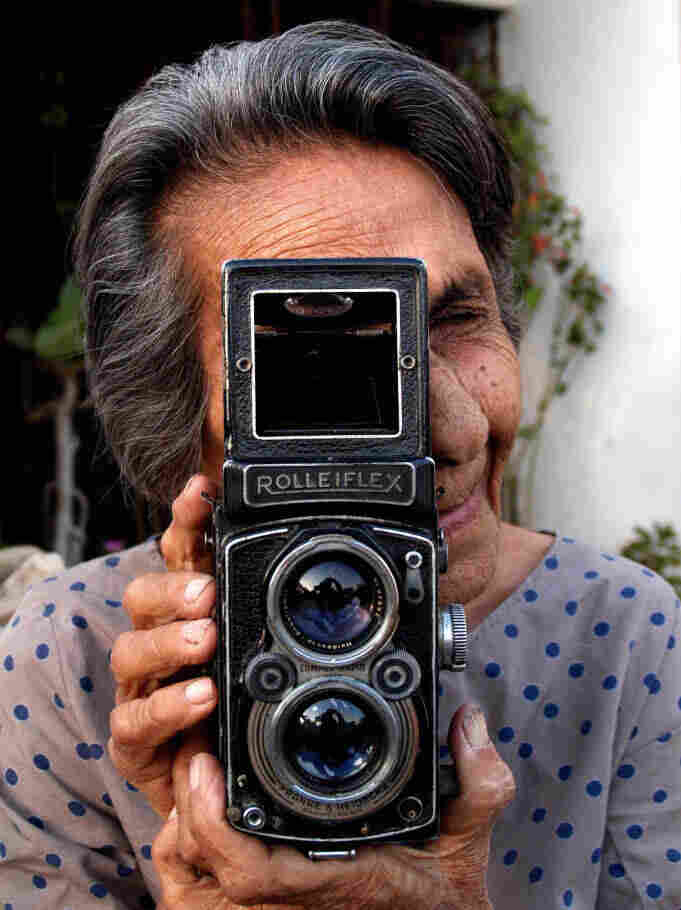 Homai Vyarawalla poses with her Rolleiflex camera at her home in Vadodara, India, on March 6, 2006. AFP/Getty Images hide caption 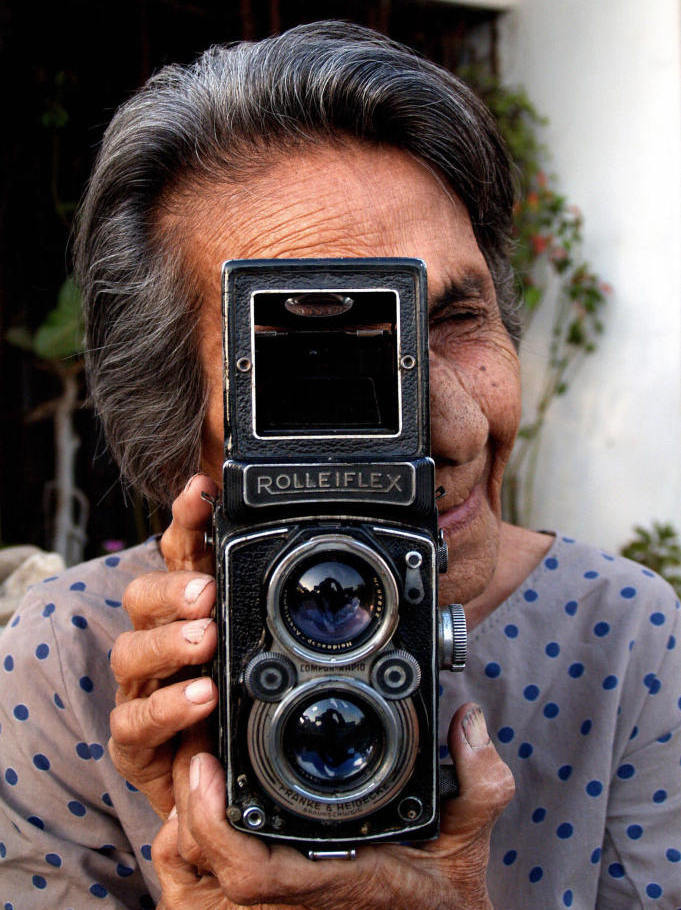 Homai Vyarawalla poses with her Rolleiflex camera at her home in Vadodara, India, on March 6, 2006.

Vyarawalla's story of triumph and commitment would have faded away had it not been for an inquisitive Delhi-based photographer who noticed a lone female name in a long list of men in the Press Information Bureau records. He kept inquiring about her and, one fateful day in the early 1980s, met her at a camera repair shop. For two decades she had lived alone with the memories of an illustrious life, and in that moment a legend was born.

"It was after 50 years of having taken these pictures that I started to see the value of my work," she wrote in March 2005. "I was just earning a living at that time with no thought of preserving it for posterity. In a country where a great man like Gandhiji has been forgotten, why would I be remembered?"

"All I want today is for people, especially the young, to see what it was like to live in those days. It was a different kind of world altogether."