Accessibility links
Fallout From Solar Storm: A Celestial Light Show : The Picture Show Sure, a massive geomagnetic spasm from the sun has its downside — rerouted airline flights, for instance. But it's been a atmospheric gold mine for photographers and "aurora nerds."

How To Capture Awesome Auroras

How To Capture Awesome Auroras

The massive solar storm that caused a few airlines to reroute flights is finally starting to wind down, but it's still providing some eye-popping special effects, especially for areas close to the North Pole.

So how does a photographer capture that? 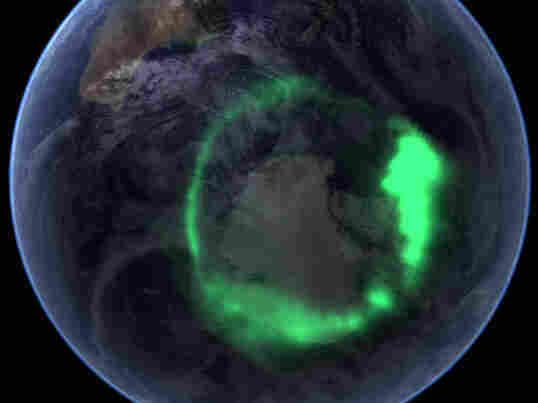 2005's Southern Spectacular: A satellite took this image of the aurora australis (southern lights) in September 2005, after a solar flare sent plasma — an ionized gas of protons and electrons — flying toward Earth. NASA hide caption

Can we also just acknowledge how awesome it is that something called space weather exists?! The folks over at our 13.7 blog have a good explanation of how it works:

The flow of charged particles on the sun produces magnetic fields. Sometimes the matter and magnetism burst as coronal mass ejections (CMEs). And if those bursts are big enough, the charged CME particles can travel all the way to our little planet and get caught in our magnetic field. When they hit atmospheric gas atoms, bam! Auroras. It's awesome.

So where better to see the earthly impact of a big geomagnetic storm — the most powerful one in six years — than Flickr?

"I have become quite the aurora nerd here on campus," David Broome wrote to me via email. He's studying geography at the University of Alaska, Fairbanks, and sent a little explanation of how he makes his photos.

"They are not particularly difficult to capture on film," he says, and by film I assume he means camera. "Even a standard point-and-shoot with an extended shutter speed is capable of producing a fair image. However, producing professional pictures of the aurora is a much more difficult story!"

The blog of Alaskan photographer Patick J. Endres offers more in-depth instructions on how to photograph the northern lights with a digital camera. He explains what you will need photographically — a camera with a bulb setting and tripod — and what you should wear: no cotton as the first layer against your skin. Instead, wear polypropylene, fleece or merino wool. Because where there are auroras, there are low temperatures!

But that's only if you're really serious about it. Even on Instagram, there are some impressive iPhone images. Face it: Auroras are just photogenic.

"Depending on the aurora," he writes, "they can be as bright as they seem in pictures, and oftentimes brighter! When they get too bright, you often end up with an overexposed image. ... It just takes time to nail down the appropriate settings for the appropriate situation, based on the activity of the aurora."

But if you have that kind of time, and if you happen to be somewhere awesome, consider yourself lucky. And share your photos with us on Flickr!