Accessibility links
What Greek Austerity Looks Like : The Picture Show Photojournalist Eirini Vourloumis moved back to her hometown of Athens, Greece, to cover the economic crisis. She found her country unrecognizable.

Half-Greek and half-Indonesian, photojournalist Eirini Vourloumis moved back to her hometown of Athens, Greece, in 2010 to cover the economic crisis. She found her country unrecognizable.

For one thing, she was struck by the surge of immigrants.

"When I was growing up it was very rare to see a non-Greek anywhere," she says.

Once-docile areas in Athens now seethe with crime, yet Vourloumis says the most dramatic shift for Greeks has been psychological.

"The mood of the people is becoming increasingly heavy," Vourloumis says. "I feel like I am living in a society which is depressed and isolated."

Vourloumis moved to New York from Greece in 2000 with an old Minolta camera given to her by her father. The lens guided her through the neighborhoods of the city while she worked on a degree. After Sept. 11, the camera became her voice.

For years, she photographed for local newspapers and worked on stories focusing on social issues. She documented the Indonesian Muslim community in New York – her mother's culture, which had seemed so foreign growing up in Greece.

Then came the global economic crisis, and headlines from Europe began calling her home.

By the time she came back to Athens, Greece's own economic crisis had been unfolding for more than a year. Through news assignments and personal work, Vourloumis has been busy documenting the impact of the austerity measures imposed by Europe and the IMF as a condition of Greece's bailout.

Her subject matter ranges from riots to homelessness, the plight of civil servants to the Perama repair docks. Once known as the "Wall Street of Greece's ship repair industry," the docks are now dotted with abandoned ships and out-of-work men. 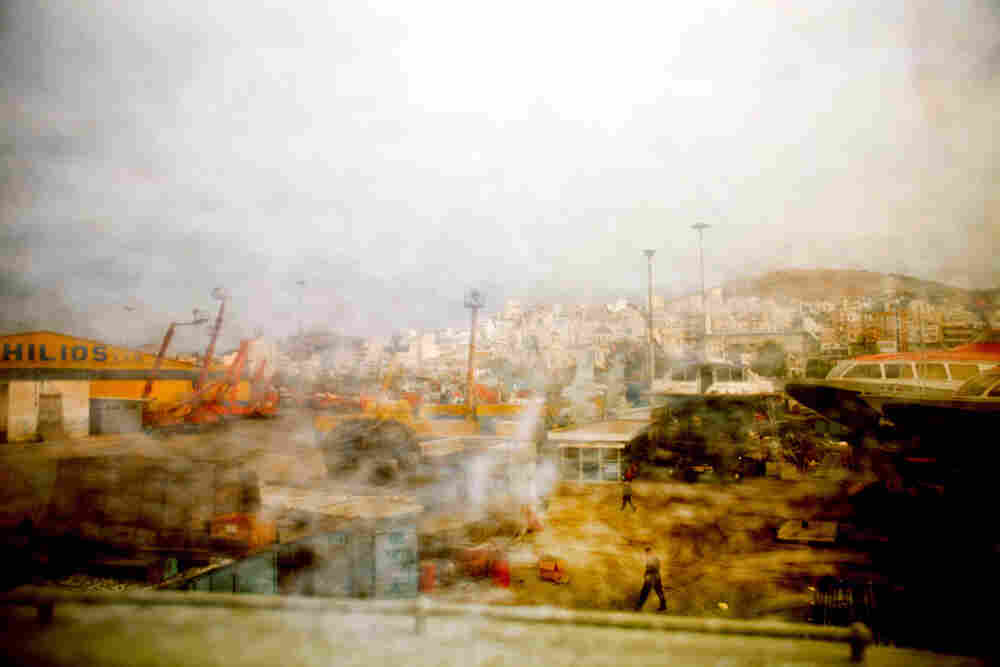 The view of Perama, a port city and one of the poorest areas near Athens, Greece. The city has been one of the hardest-hit during the economic crisis. Eirini Vourloumis hide caption

Vourloumis' images offer an intimate view into to the economic crisis: A nurse standing in an empty locker room; a young woman recovering from a tear-gassing; dock workers desperate to get a days work. All are vignettes of a country mired in uncertainty and dire economic times. For Vourloumis, the news story has become personal.

"We feel trapped," she says, "and the worst thing is waiting for [an] event to unfold blindly without us having any control of what is to happen." The austerity measures threaten more than the livelihood of the Greek people, she says, it's affecting their sense of national identity, one that is mired in pride.

Athens is a different city, Vourloumis says, and it's getting worse – even unstable. She believes it will take at least a generation to mend what she calls "the dysfunction of the Greek system."

With so many people out of work and more austerity measures looming, bad news has kept Greece in the headlines — and Vourloumis employed. "It is a double-edged sword," she says. "I do sometimes feel uncomfortable."

"But that is why it is my responsibility to cover this story with as much sensitivity and respect as possible."