Accessibility links
A Way To Save The Rhino, Just Not Its Horn : The Picture Show Rhino poaching is on the rise. The animal's horn is believed to have medicinal properties, and some say legalizing the trade could help squelch the black market. One controversial way to reduce poaching may be rhino ranches, where the horns are harvested for sale.

Rhino poaching has been on the rise in the past few years. In South Africa and other regions where rhinos run, poachers have been killing or darting rhinos with tranquilizers for their horns.

Rather than adorning walls, many horns are ground up into medicines, sold mostly in Southeast Asia. A possible — yet controversial — way to stop poaching may be rhino ranches, where the horns are harvested for sale and the animals are allowed to grow new ones.

National Geographic staff writer Peter Gwin reports on the legal and illegal rhino horn trade in the magazine's March issue. He is also the author of an upcoming e-book, Rhino Wars: The Violent Underworld of Poachers and Black Market Medicine.

'It Makes You Angry'

Gwin tells Weekend Edition host Scott Simon that he was drawn to the story by the image of a female rhino with her horn cut off. She had survived after poachers tranquilized her, took her horn and left her to die.

In another poaching incident, hunters targeted a male and a female rhino standing next to each other.

"They used silencers so ... they don't even hear the mate go down," Gwin says. "And that, it makes you angry — just like I hope when people see that first picture in the magazine it makes a lot of people [have] a visceral reaction to that."

He says being a rhino is incredibly dangerous right now. There were 448 rhinos confirmed poached in 2011, and it was a third-straight record-breaking year for poaching in South Africa.

The rising price for rhino horns in Asia is driving the hunt, Gwin says, since the horns have long been viewed as a cure-all for many ailments in traditional medicine there.

"What seems to be driving this in Vietnam is around 2007 there was a rumor that a high-ranking Vietnamese official cured his cancer using rhino horn," Gwin says, "and the very next year, poaching went [through] the roof in South Africa, and it's continued ever since."

However, the science on the horns' medicinal benefits is "really, really thin," he says.

Which Practices Are Valid?

To squelch the black market, Gwin says some advocate for rhino ranches, where the horns are cut in a way that allows them to grow back. The horns would then be harvested for legal sale. 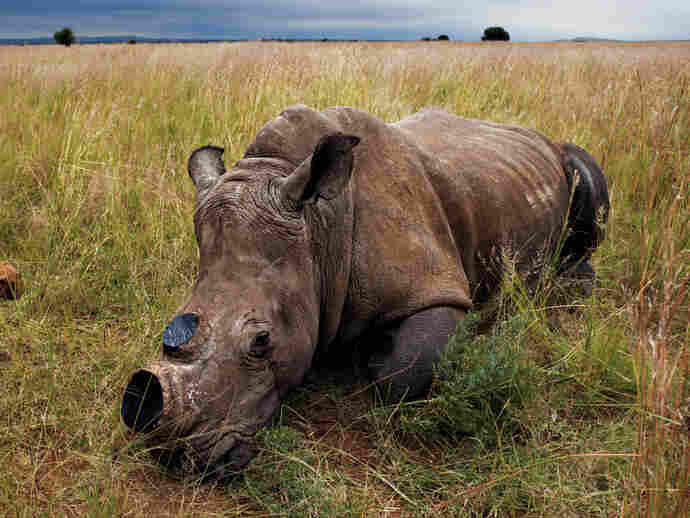 An anesthetized rhino is left to wake up after a dehorning procedure administered to decrease the risk of poaching. Brent Stirton/National Geographic hide caption 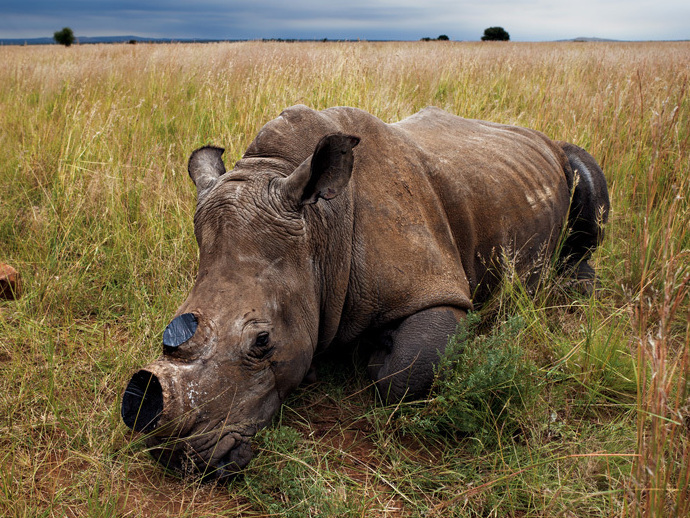 An anesthetized rhino is left to wake up after a dehorning procedure administered to decrease the risk of poaching.

"It is highly unpopular among many traditional conservation lobbies," he says.

Proponents hope the practice would lower market prices and decrease incentive for illegal poaching, but critics argue the demand could grow beyond legally sustainable levels.

Rhino farming may have its skeptics, but Gwin suggests trying alternative approaches to combat poaching could be beneficial.

South African law allows people to hunt and kill rhinos as long as the horns are taken as trophies. Yet darting a rhino and cutting its horn for medicinal uses is illegal and seen by some as "abominable," Gwin says.

The different standards raise a question of "cultural bias," he says, but a fusion of practices may be on the horizon.

"I talked to several doctors, and they felt like we're headed for a hybrid in our culture," Gwin says. "[We'll have] science-based medicine, but we'll also have some traditional treatments. And we see that here in the United States."