Accessibility links
Sex, Drugs And Rock Photography : The Picture Show Ever wonder who took that album cover of Queen? Mick Rock is his real name, and that's not his only iconic photo. Think Lou Reed of the Velvet Underground, Syd Barrett of Pink Floyd — and more. 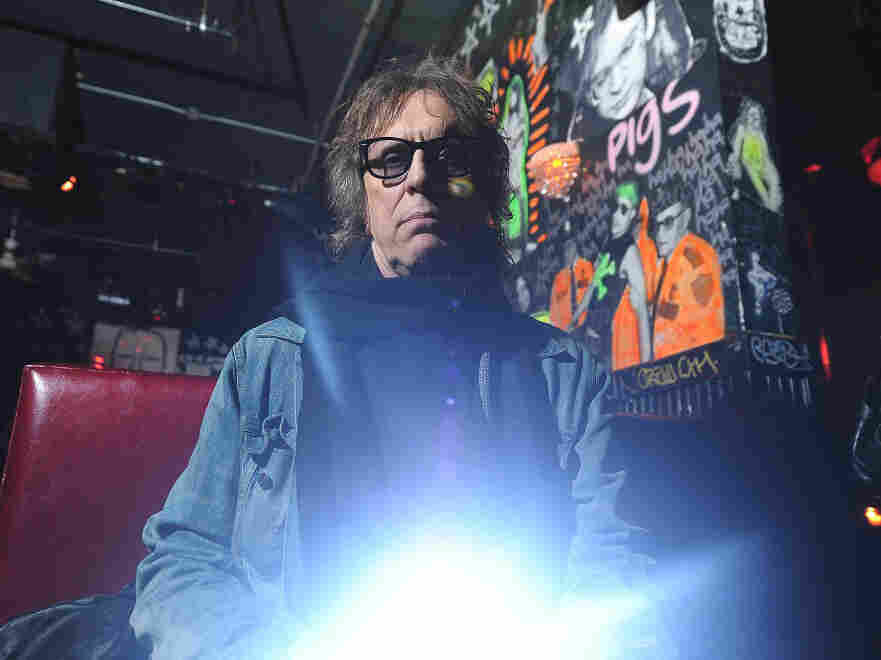 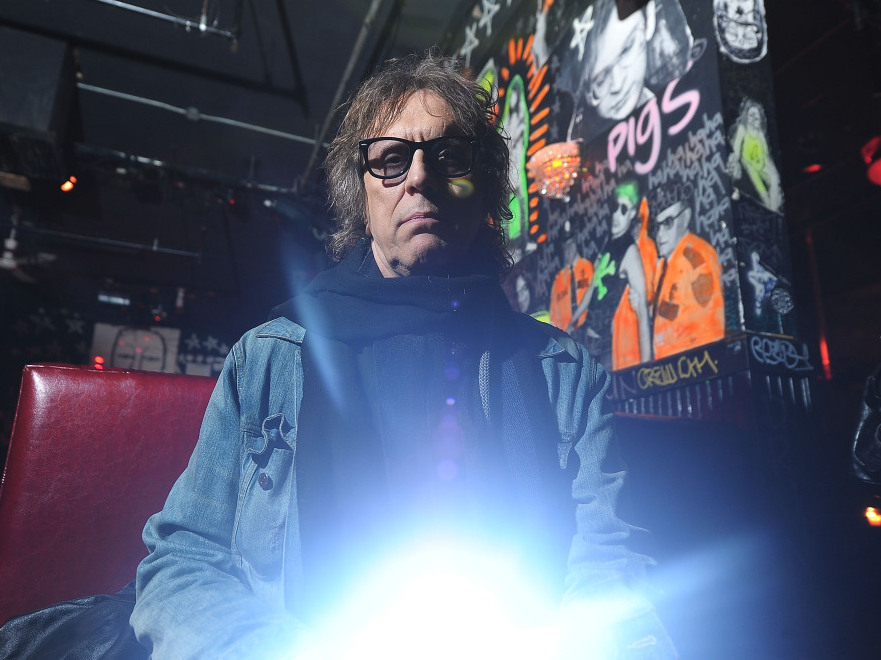 Mick Rock is really his name — though he's Michael to his mother — and he is exactly what you might imagine a rock photographer to be: tall and hip with shaggy hair. Shaded Ray-Bans, jean jacket, scarf. Oh, and an English accent to boot — so he can drop words like "bloody" and "shag" with allure (though he doesn't shy from the American equivalents, either).

"In any other era, dogs wouldn't have pissed on me," he says. "Thank God for Mick and Keith," who helped make lanky, messy Englishmen cool. He's referring to the Rolling Stones, of course.

Now in his 60s, Rock remembers the '70s well. Or, parts of them. And it goes without saying that the times have changed.

"The world is swamped with media today," he says. "I go to an event and I get photographed. Shoot the bloody photographer? What the hell is that about?"

On a recent night in Washington, D.C., for example, the cameras click incessantly (guilty) as Rock gives a few words at the opening of his aptly titled traveling photo show, Rocked. It originated in New York City, and it's hosted and produced by the W Hotel chain where, these days, Rock can be found shooting live concerts. 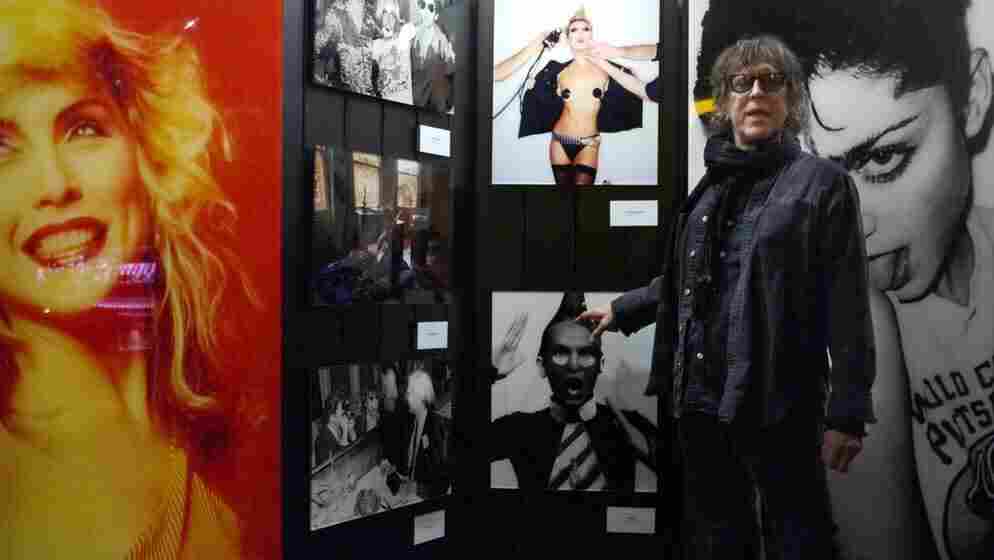 Mick Rock gives a tour of his photographs at the opening of his traveling show, Rocked, at the W Hotel in Washington, D.C. Claire O'Neill/NPR hide caption 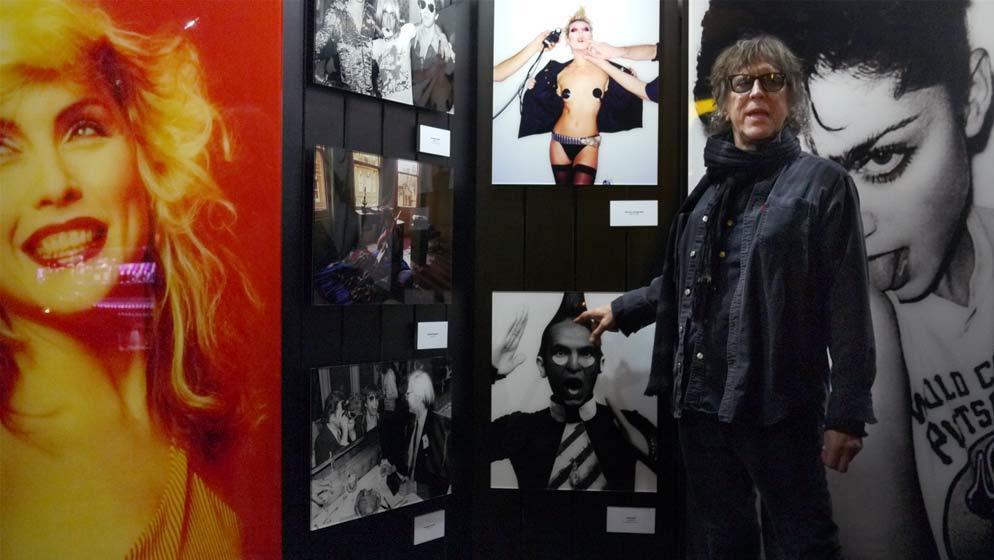 Mick Rock gives a tour of his photographs at the opening of his traveling show, Rocked, at the W Hotel in Washington, D.C.

After his remarks, some high-heeled women and suited men (remember this is D.C.) trickle into a ballroom where they sip on cocktails and politely wait for a band to start playing. Meanwhile, Rock's prints of Iggy Pop, David Bowie and the likes adorn the surrounding walls, watching down, it seems, on what has become of rock. (Bowie would have worn the heels AND the suit, for heaven's sake.)

"Back then," Rock says wistfully in an interview the next day, "well, it was the age of sex, drugs and rock and roll, of course."

And gender-bending, men in mascara, fashion and, most of all, experimentation. Rock never planned on being a photographer. He was studying language and literature at Cambridge University, and found himself in the right place at the right time. He got high, picked up a friend's camera, "and began to play," he says.

That might explain why he doesn't cite Ansel Adams as an influence, but more readily identifies with poets like Coleridge and Rimbaud and Byron.

And why he refers to Syd Barrett of Pink Floyd as a "poet maudit," an artist on the fringes of society. "He just had that romantic aura about him," Rock recalls. This was in the early '70s, when Barrett had embarked on a solo career. One of the photos Rock took in an improvised shoot ended up on a Barrett album cover.

Listen to the story behind that shoot:

The story behind the photo of Syd Barrett:

A few years back, Rock says, "some clever bugger journalist" dubbed him as "The Man Who Shot The '70s" in a headline, though Rock is the first to qualify that claim. What he really shot was the glam rock scene — making images you might recognize: the album cover of Queen II, the album cover of Lou Reed's Transformer, Iggy Pop in an unlikely back bend, David Bowie with a sax.

He was by no means the only scenester with a camera. But unlike today, back then not everyone had a camera. Having one and knowing how to use it — or knowing how to fake it until you make it — got you access.

It all started, more or less, when Rock met "Davie Jones," as he calls him, or David Bowie, back when the latter was still playing shows for a few hundred people. Rock met these soon-to-be legends early in the game. "So I rode that wagon and I just was there," he says. In other words, he wasn't just documenting the scene, he was part of it.

"I was not an outsider," Rock explains. "This was my life, too. I didn't play an instrument, but I lived the life: stay up all night, sleep all day."

So as Bowie's Ziggy Stardust persona began to take shape and glitter, Rock was there to goad him on, to document and give feedback.

"[Rock] was developing his medium as they were developing theirs," says Chris Murray, owner of the former Govinda Gallery in Washington, D.C. Murray gave Rock a solo show in the 1990s and today they're still friends.

"He's really somebody who's fun to be with," Murray says. "He was just a kindred spirit. He was one of them really."

"There was not a scintilla of cynicism in me about anything," Rock recalls. "I was not owned by a corporation, I was not owned by a publication. My loyalties were always to the acts. I was following my enthusiasm. I was not [thinking] 'I am an image master.' We're talking about some kid in his 20s."

And his 30s and 40s. By the 1990s, though, the sex, drugs and rock and roll caught up with Rock and many of his friends. Some of them had passed away, and Rock was photographing to survive. He had a reputation for being, as he puts it, "out of order." It took three heart attacks and quadruple bypass surgery to get him to clean up.

"I always think I knocked on heaven's door and they told me to bugger off," he says. "I had to clean up my karma, to scrub my reputation."

These days, if Rock wants a buzz while photographing he'll take a shot of coffee. He still has that rock and roll vibe, though it's perhaps less rock than roll these days. He gets up early for yoga in the morning; he chants and meditates.

Cats are cute, but there's no cooler cat than Bowie.