Accessibility links
Photos From The Sets Of Latin American Soap Operas : The Picture Show A new photography project focuses on Latin American telenovelas. For some viewers, a histrionic soap opera is pop art. For others, it's an embarrassment to Latin culture.

Photos From The Sets Of Latin American Soap Operas

Photos From The Sets Of Latin American Soap Operas

If you've spent even a few minutes watching a telenovela, or Latin American soap opera, you're familiar with some of the archetypes: the swarthy, good-looking country man; the maid; the poor peasant woman (generally devoid of indigenous features); the evil rich girl, etc. For better or worse, it's a huge part of Latino culture, and photographer Stefan Ruiz wanted to document it.

His project and new book, Factory of Dreams, includes icons of the telenovela world created at Mexico's Televisa — the largest mass-media company in Latin America. And it has sparked some heated conversations.

On his website, Ruiz writes that telenovelas — and the characters in them — "are a powerful vehicle to understand contemporary Latin American culture and its society." 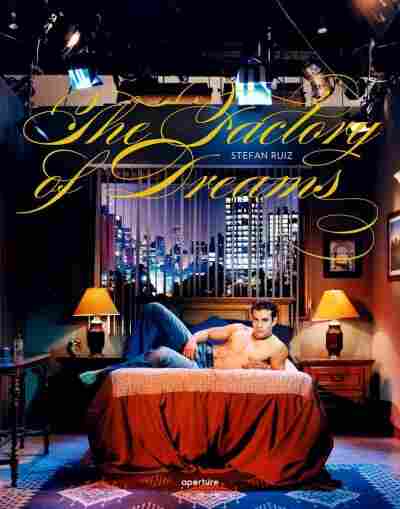 The Factory of Dreams

by Stefan Ruiz and Pablo Helguera

That sentiment, and the topic of telenovelas in general, doesn't sit well with everyone. Amaris Castillo of Univision News recently parsed the varied opinions in a blog post. She explains that the photographs have caused a stir in Mexico at a time when the country is convulsed by protests against Televisa's media dominance. Ruiz, too, has noted the reaction.

"This project is really difficult for some people to deal with," he says. "Certain people don't want to consider it an art form, even though it really is a popular art form. I was asked to show this at a museum in Mexico — I won't mention the museum — and the curator, the board rejected it because they said the subject matter wasn't something they wanted to show in their museum."

Comments against the project ranged from anger at glorifying telenovelas to feelings that the genre is a thing of the past. Yet the Los Angeles Times recently reported that U.S. networks are looking to make their own versions of novelas.

Like so many Hispanics, I grew up watching them. While they're often absurdly cheesy, the impact of these shows in Latin culture is huge. In my case, I bonded with my grandmother over them. They influenced my adolescent views on sexuality, romance and what is beautiful and desirable.

As an adult watching a telenovela, I feel a mix of nostalgia, humor and disgust. I recognize the genre's inherent racism (despite catering to an audience of color, the casts range from light-skinned to white), classism and tremendous sexism. And according to professor Diana Rios from the University of Connecticut, telenovelas instill values of not only beauty, but also risky sexual behavior and alcoholism.

If telenovelas are as successful as ever, it may be because they reflect Latin Americans' own social, sexual and racial fantasies — of class mobility (fairly difficult in most Latin countries), revenge on exploiters (a constant theme) and whiteness. Mexican television critic Alvaro Cueva explains that in a country like Mexico, facing an increasingly horrifying, violent reality, "people watch telenovelas for power."

"Every day, at the same time, on the same channel, we are going to see the same story," he says. "For an instant you become God over the characters because you know what will happen to them."