Believe it or not, there's a lot of food involved in wet-plate photography. Egg whites (albumen) are used to make the glass plates adhesive to the light-sensitive chemicals. And one way to keep the plates from drying out after processing is to coat them in honey. It's also physically demanding, so you get really hungry. 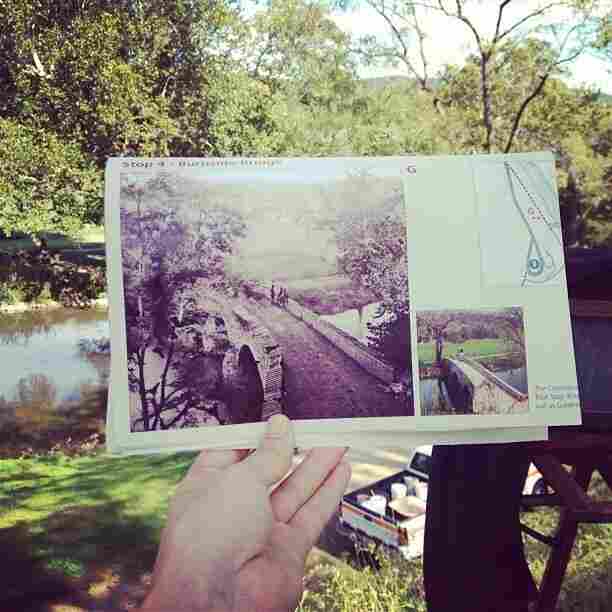 Here's a snapshot from the field as Harrington composed his image of Burnside Bridge — which involved schlepping the huge, fragile camera down a steep incline to get the right perspective. Claire O'Neill (@clairevoyant)/Instagram hide caption 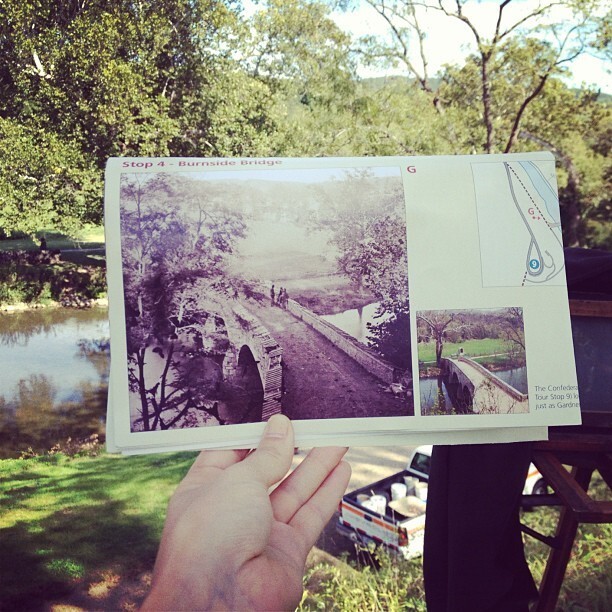 Here's a snapshot from the field as Harrington composed his image of Burnside Bridge — which involved schlepping the huge, fragile camera down a steep incline to get the right perspective.

These are the things I learned in the field with wet-plate photographer Todd Harrington. For the 150th anniversary of the Battle of Antietam, we asked him to retrace the steps of Civil War photographer Alexander Gardner. We wanted to capture the same scenes with the same equipment — to see how things have changed. (Kind of like the nerd's version of Dear Photograph.)

Turns out, not much has changed. The land surrounding that historic battle site has been beautifully preserved. We arrived early one morning this month as the park staff was pitching tents in preparation of the anniversary festivities. But at some of the peripheral sites where Gardner photographed, a serene quiet fell over the healed landscape.

Of course, there are traces of modernity — like telephone lines, paved roads and Porta-Potties. But the main difference between Gardner's original images and the ones re-created by Harrington is the one thing that made Gardner's so memorable: the bodies of fallen soldiers.

One reason we were so interested in this particular set of images — that is, the ones Gardner took at Antietam — is because in his day, those images were groundbreaking. Up to that time, war photography tended to portray a rosy picture of war, like heroic soldiers posing for portraits after battle.

The day of fighting at Antietam remains the bloodiest in American military history. And for the first time, Gardner turned the lens on the dead soldiers awaiting burial. The photos were displayed in New York City about a month after the battle. As Harrington told me: "It was consternation. No one had ever seen anything like that. It horrified the public." 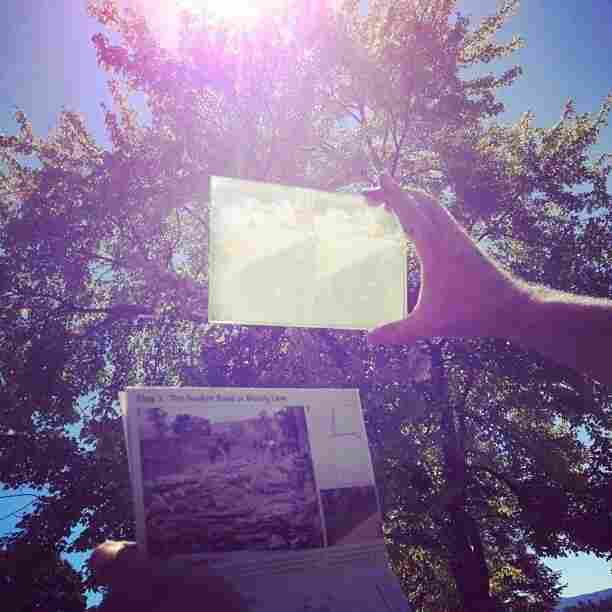 Harrington compares his exposure to the original, to see if they line up correctly. Claire O'Neill/(@clairevoyant)/Instagram hide caption

We also wanted to gain a better appreciation of what Gardner's work entailed. And let me just say: It's crazy difficult. (Meanwhile, I was documenting the whole process on Instagram, and don't even know how to begin reconciling that.)

"It was quite a herculean effort to get up here carrying all your encumbrances," Harrington explained. Just to get to Antietam, Gardner would have packed up all of his equipment, fragile plates and chemicals — plus enough food — into his wagon. He would have made the 70-mile commute from Washington, D.C., along bumpy, unpaved roads, with the threat of Confederate cavalry along the way.

Once at the site, he had to figure out a strategic place to set up his portable darkroom — and then lug his heavy camera around the hilly terrain where bodies had already been sitting out in the sun for days, if you can imagine the smell.

There are more than a dozen steps involved in each exposure — and, therefore, about a dozen variables that could go wrong. It took Harrington a full day's work to get six successful images — a relatively productive day. Granted, his task entailed the additional obstacle of finding the exact spot where Gardner stood, and the exact camera angle, which was no easy feat.

"It seems very, very difficult to work in that kind of environment. But he did — and he did fabulous at it," Harrington concluded at the end of the day.

"Again, you're making your film every time; you're carefully composing; there are so many things that could go wrong," he says. "We're just pleased he was as accomplished as he was to give us a legacy to study."