Accessibility links
Portraits From Slab City: 'The Last Free Place On Earth' : The Picture Show Photojournalist Jessica Lum rented an RV and moved to the California desert to document the residents of Slab City, a campsite for snowbirds and squatters.

Portraits From Slab City: 'The Last Free Place On Earth'

Portraits From Slab City: 'The Last Free Place On Earth'

People come to Slab City, a squatter campsite in the Colorado Desert in southeastern California, for many reasons. But one sentiment seems to unite many of them: They want to avoid people like photojournalist Jessica Lum. That is: City people. Taxpayers. Media types.

Which is a tough situation, if you happen to be Lum and you hope to document the people of this community.

"People feel they can determine their level of isolation or engagement," Lum says.

Since its establishment in the 1950s on the grounds of an abandoned World War II Marine barracks, Slab City has become known as a haven for snowbirds looking to live an independent lifestyle. It's often called "The Last Free Place on Earth."

Lately, it has also become a destination for journalists and film crews looking for a good story. And though the residents of Slab City don't have trash collection or a sewage system, they have Internet access, and they follow the news about their home closely.

"A lot of people felt there were misrepresentations floating around. A lot of past articles focused more on people who were fleeing the recession or dealing with drug or alcohol abuse," says Lum. "There are people who struggle with that, but they felt the coverage was taking on a minority and representing them as majority. "

So when Lum, a 25-year-old graduate of UC Berkeley's Graduate School of Journalism and a blogger for PetaPixel, started going to Slab City last year for her ongoing multimedia thesis project, Slab City Stories, she met a population that was seeking privacy but whose privacy was being consistently breached.

During a visit last August, she was taking photos with friends when she heard shouting down the road.

"We just kind of jumped in our car and left," she says. "Maybe they were just saying hello. I don't know."

Guilt about her flight accounted partly for Lum's return in October. She was also driven, as a journalist, by a desire to understand why anyone would want to live in a place like Slab City. 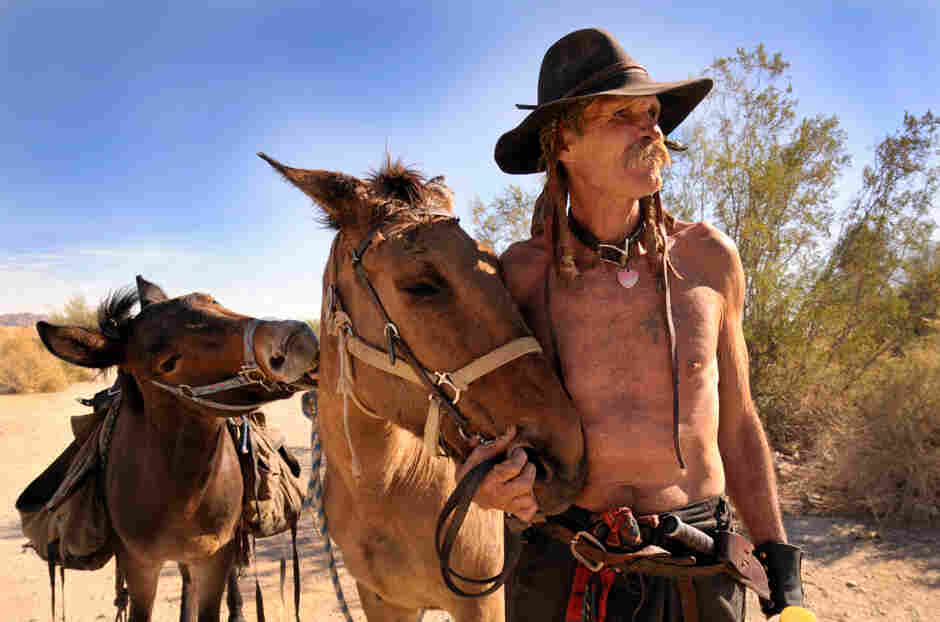 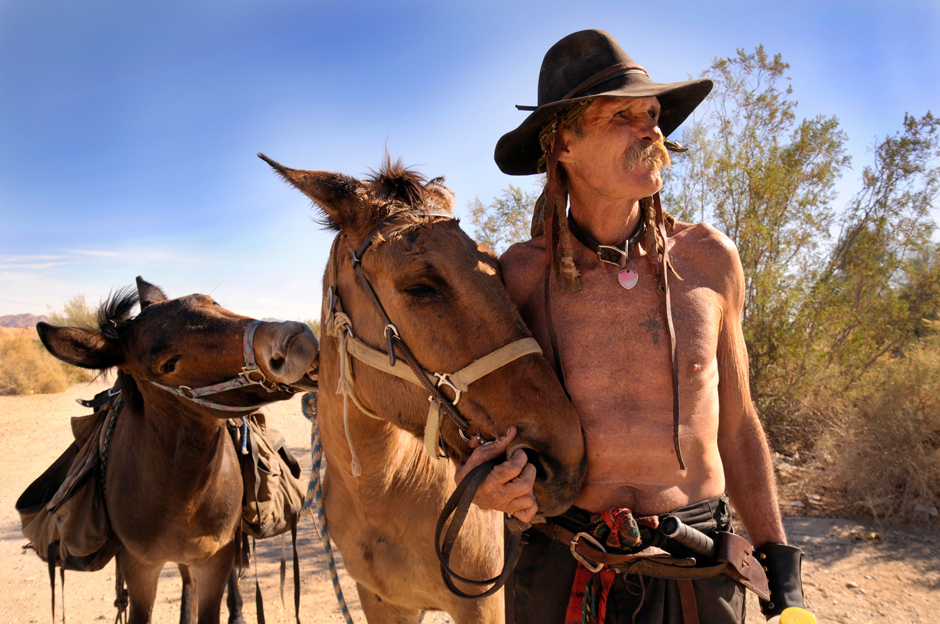 Then, this December, she found out for herself. She rented an RV and parked it in Slab City for three weeks. That's when she started to build trust with her subjects, including a retired social worker turned balloon artist, the owner of a solar-powered Internet cafe, and a former carnival worker who built his own skate park.

"I think once I became a recognizable face, it sort of gave me a bit of legitimacy," she says.

Residents let her photograph them bathing nude in the hot springs, and let her enter the social club whose sign proclaimed "No Media." They liked that she wasn't from a major news organization and that she's young; they even gave her a nickname – "Berkeley."

Unlike journalists under pressure to make deadlines and find news hooks, Lum could take her time, searching for stories on the fringe of the fringe.

"Most journalists, especially local ones, spend a couple days there, so they don't really penetrate the community all that much," Lum says. "They get the same characters, the same types of quotes. There was one family that was living right in front of what's called Low Road, and that family basically got in almost every news article that I've read about Slab City." 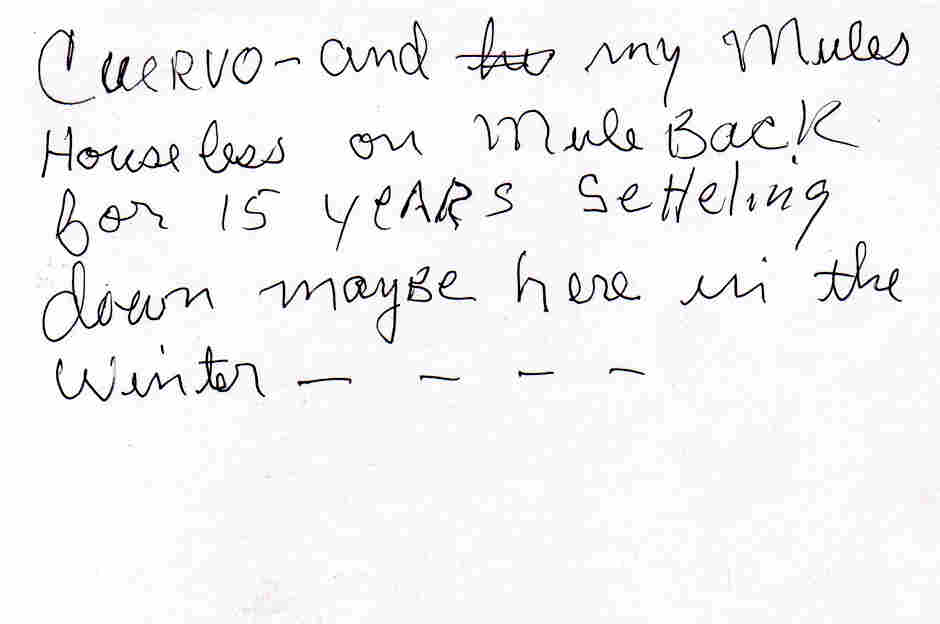 Index card by Cuervo. The text reads: "Cuervo and my Mules Houseless on Muleback for 15 years Settling down maybe here in winter ...." Courtesy of Jessica Lum hide caption 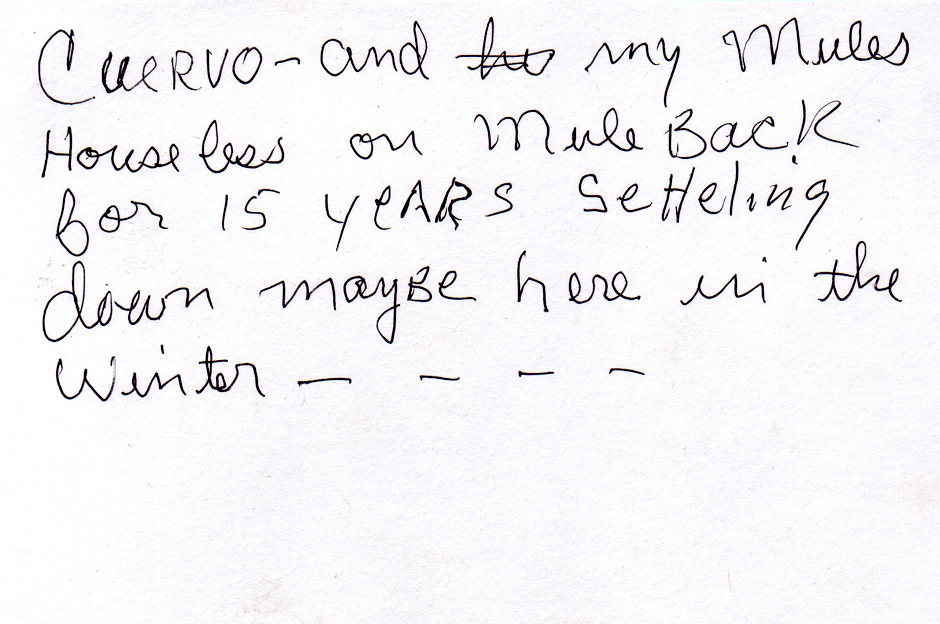 Index card by Cuervo. The text reads: "Cuervo and my Mules Houseless on Muleback for 15 years Settling down maybe here in winter ...."

Talking with residents about media coverage informed her journalistic process. Lum didn't narrate her documentary videos, instead allowing the subjects to narrate their own stories. She even gave them index cards so they could describe themselves, photos of which she published alongside her portraits online.

So what's to like about Slab City? It's not the safest or most comfortable — it gets cold in the winter and pitch dark at night. But Lum says she didn't mind her time living there.

"There are people who might want to rob or steal some stuff. But I never felt threatened or scared when I was there," Lum says. "There's a dynamic where people watch out for each other, and I felt I was included."