Accessibility links
Time-Traveling In The Pacific Northwest : The Picture Show Seattle was just a baby when these photos were taken. But the people in the photos had been in that region for a long time.

Time-Traveling In The Pacific Northwest

Time-Traveling In The Pacific Northwest

There's nothing like visiting a new landscape to spark the imagination. I just got back from a two-week road trip around the Pacific Northwest region of the U.S. and Canada. And though it was my own country (the non-Canadian part, at least), it felt completely foreign to my eyes, which are accustomed to the swampy, lush Southeast.

One great thing about the Pacific Northwest region is that while there are nice cities, you don't have to go far to find wilderness. Think about it: Canada is geographically larger than the U.S., but its entire population is less than that of California.

So it's not hard to stand on a quiet beach somewhere and imagine what it must have been like before Europeans came. 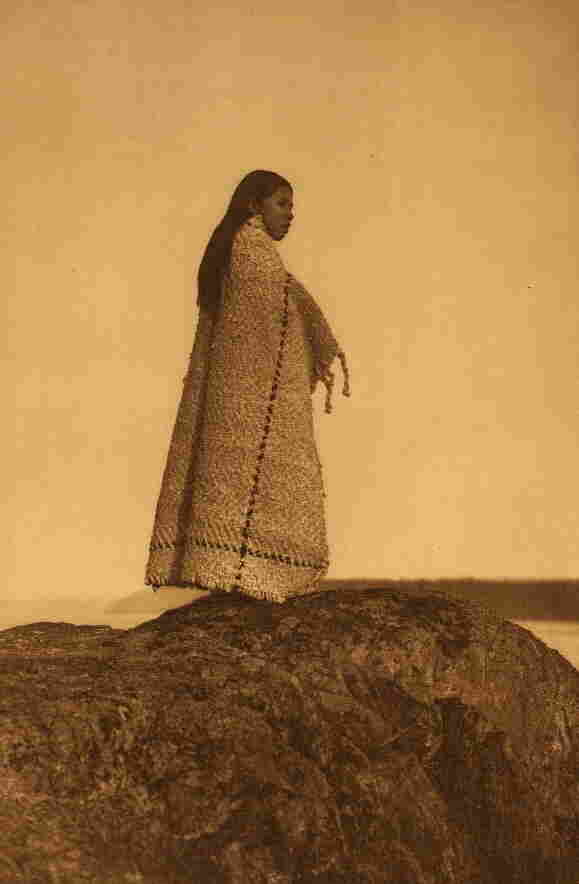 On my last day in Canada, I stopped by the Royal British Columbia Museum to see its famed First Peoples exhibit. It's an incredible collection of archaeological artifacts, material culture and contemporary art.

And, of course, one thing that struck me was the photography of Edward S. Curtis, who published a 20-volume book called The North American Indian between 1907 and 1930.

There's a long list of caveats that comes with these photos.

Learn more about Edward Curtis and his brother, Asahel, a lesser-known photographer who captured the Pacific Northwest in color.

The Other Curtis Brother

Much of it is digitized in the Library of Congress, and in one essay, Professor Mick Gidley explains: "We have to accept that, in a variety of ways, anthropology does not simply record indigenous people; it constructs them."

The central problems: The photos were taken at a time when the indigenous populations were being pushed out by settlers. They were taken by a photographer who used pejorative terms like "primitive," and who often staged and romanticized their customs. He then lumped them all together in one monolithic collection. Despite his sincere intentions, and exhaustive documentation, some might argue that Curtis is responsible for a generic aestheticization of "the native."

Picking just a handful and throwing them into a Web gallery is even more reductive. But none of this diminishes the value of the photographs and (in my opinion) the fact that they are beautiful.

Before I make any big conclusions, I'll say this: I love New York City, Twitter and air conditioning on a hot day as much as anyone. But while standing alone on those Pacific beaches, I thought about how rare an experience it was: to find myself alone in a place with no trace of modernity. But then, upon further thought, maybe I wasn't alone. In Gidley's words:

"In 1855, when Chief Sealth — from whom the city of Seattle took its name — surrendered the Puget Sound region, he is supposed to have said in his address to Governor Isaac Stevens, 'When the last Red Men shall have perished, and the memory of my tribe shall have become a myth among the white man, these shores will swarm with the invisible dead of my tribe, and when your children's children think themselves alone in the field, the store, the shop, or in the silence of the pathless woods, they will not be alone.' "

The photos in this gallery, all taken in the Pacific Northwest, are just a few from the extensive collection that has been digitized by the Library of Congress. Spend some time on that site to get a better feel for the scope and significance of these images.