I was scrolling through my Tumblr feed a year or so ago, when I saw a photo of Joyce Bryant. The caption said she was once dubbed the "black Marilyn Monroe" and was mentioned many times in Walter Winchell's gossip column.

But, I had never heard of or seen Bryant before. It's reactions like mine that led 42-year-old writer Nichelle Gainer to start a book project showcasing a collection of rarely seen historical photos of actors, educators, writers, students, musicians and more — all African-American.

"I write fiction for the most part, and when I am in libraries doing research ... I've come across a lot of different interesting articles and photos that you never see anywhere else," says Gainer, who has written for Woman's Day, GQ, InStyle, Essence and Honey magazines. "They're just locked in these ivory towers, whether it's an academic institution or a library."

Gainer, who is still working on her book, decided to share her photo finds and now curates the Vintage Black Glamour Tumblr blog, Facebook page and Pinterest account. Much of what she posts are photos you likely haven't seen before of stars you may know.

"There's tons of fabulous pictures of Josephine Baker, and you only see her in a banana skirt. I had someone write me and say, 'Oh, why don't you post the picture of Josephine and her famous skirt?' I said, 'Because you've seen that before, right? The reason I don't post it is because you have seen it before and I've seen it a million times, too.' I like to post things that people have not seen, that they don't know about and then they see it and go, 'Oh, my God, where did that come from?' " 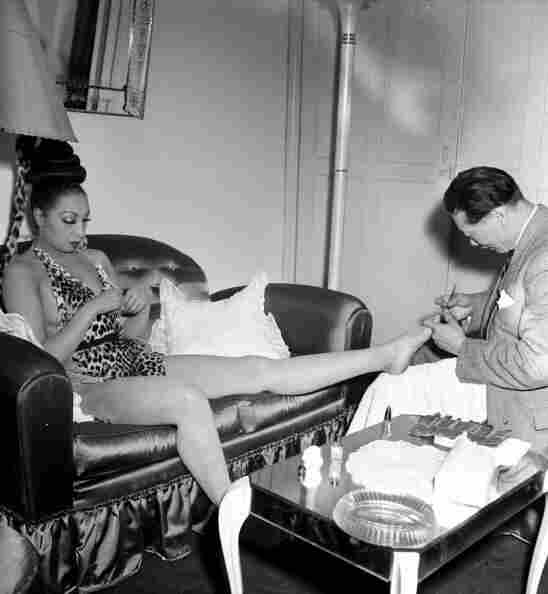 That's Bananas: "Whether [Josephine Baker's] getting a pedicure or she's walking down the street or she's relaxing in a yard somewhere, I just love the variety of pictures of her," Gainer says. "The banana skirt is a part of who she was, it's the most famous thing, but it just annoys me when that's just the only thing. ... There was a lot more to her than that." Michael Ochs Archives/Getty Images hide caption 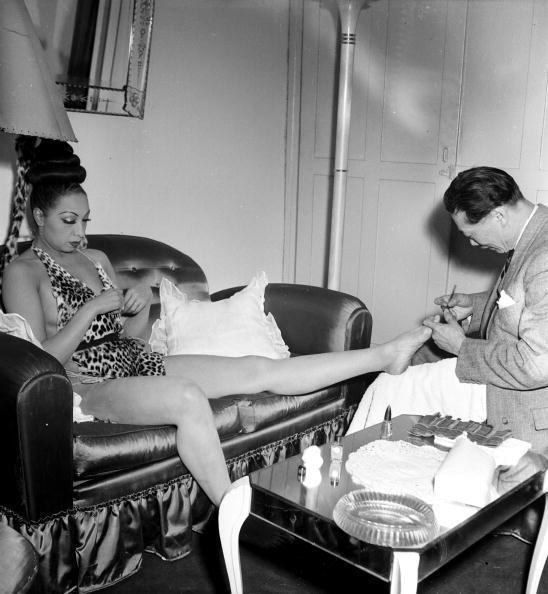 That's Bananas: "Whether [Josephine Baker's] getting a pedicure or she's walking down the street or she's relaxing in a yard somewhere, I just love the variety of pictures of her," Gainer says. "The banana skirt is a part of who she was, it's the most famous thing, but it just annoys me when that's just the only thing. ... There was a lot more to her than that."

But often mixed among the luminaries are regular — but still glamorous — people. Those are the photos that fascinate me.

"On the anniversary of the March on Washington, I put up a picture of a woman named Karen House, who was holding up buttons for the March in 1963. She was a campaigner and an organizer, not a model or a beauty queen," Gainer says. "That's glamour to me, too, but I kind of stretch it to where it expands to women from all walks of life, though, yes, there does have to be a certain style to it, a certain beauty."

And, you get more than just a photo because when she can, Gainer includes information about the people in the photo, where it was taken and who took the photo — sort of a mini history lesson.

"I try not to just post a picture. Sometimes I will if you don't need as much context — I don't have to explain who Lena Horne is — but for the most part I try to give information as well," she says. "I'll say, 'This is Dorothy Dandridge rehearsing with Phil Moore, he was a great vocal coach and composer, and he trained Frank Sinatra and all these other people as well.' I want people to know you're not looking at some anonymous random person."

Tanya Ballard Brown is an editor for NPR.org.