Accessibility links
A Brief History Of L.A.'s Billboard Art : The Picture Show You may not consider a billboard to be "art." But back in the day, many of them were hand-painted, and no two were alike. Today, Robert Landau's photos are all that remain of L.A.'s ephemeral street art.

Photographer Robert Landau inherited artiness from his father, who ran a fine-art gallery in Los Angeles and favored German and Austrian expressionism in particular. As a teenager in the 1970s, though, Landau favored something else. The Sunset Strip was his playground, and in his eyes, art was all around. 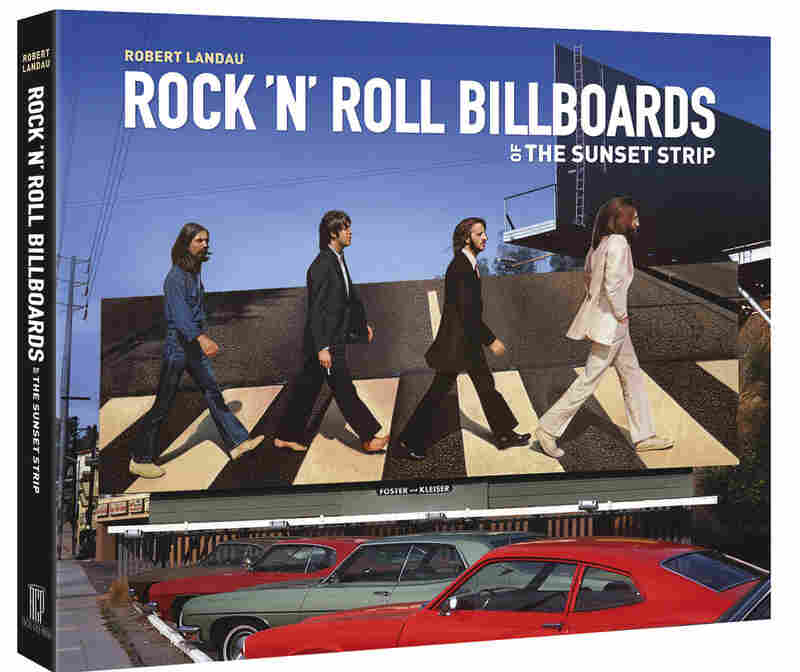 by Robert Landau and Frans Evenhuis

"When I went out to explore the world," he says on the phone, "I felt the Strip was like a gallery; there were these hand-painted works of art on the street."

What he's referring to, though, are billboards: Not necessarily what most would consider "art" — at least not by contemporary standards.

"They looked like giant art pieces that kind of represented my generation and the music I listened to," he says.

Landau was 16 when he started pointing a Kodachrome-loaded camera at larger-than-life icons hanging over L.A.'s streets — the Beatles crossing Abbey Road, Linda Ronstadt in roller skates. At the time, he explains, music billboards were relatively new to L.A.

Big ads for hotels, cars and soda were a dime a dozen. But in his new book, Rock 'N' Roll Billboard of the Sunset Strip, Landau writes that rock-related billboards didn't debut in L.A. until 1967. That year, Elektra Records took a gamble on a new marketing strategy to promote a local, up-and-coming band: The Doors.

"It led me to an interest in the urban environment," he says. "I'm an urban landscape photographer. I've always thought that L.A. had a very unique look. It's really built around people driving in their cars. And so the billboards, like a lot of the signage and architecture, are really meant to be seen from people's cars."

Landau has an extensive record of L.A. from the 1960s onward. And a good 40 years after his first billboard photo, he has unearthed those early Kodachrome slides for this book. 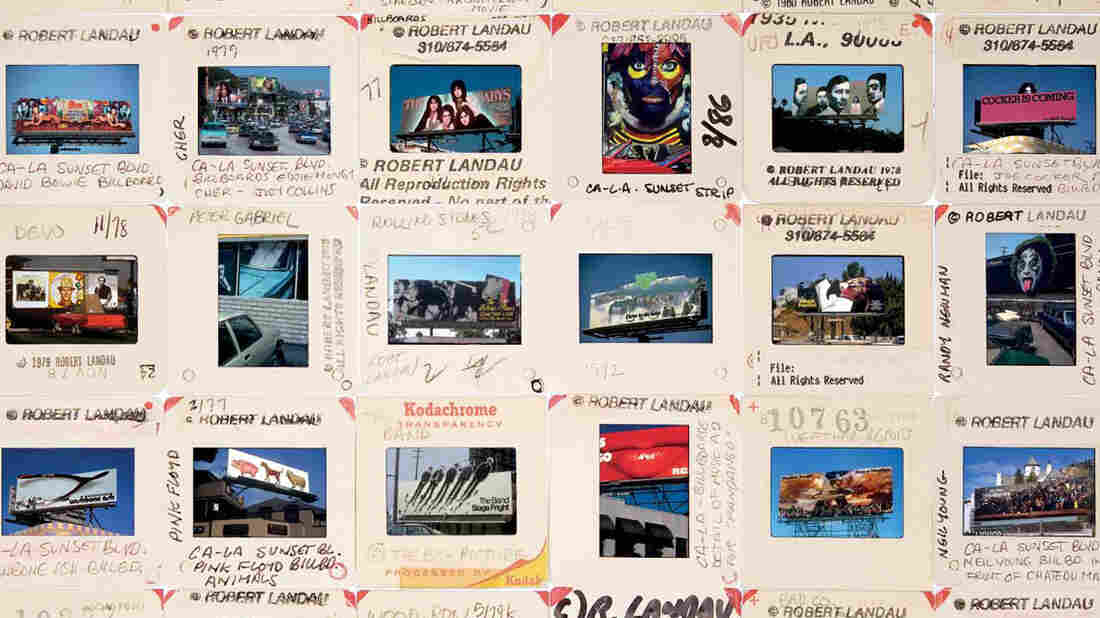 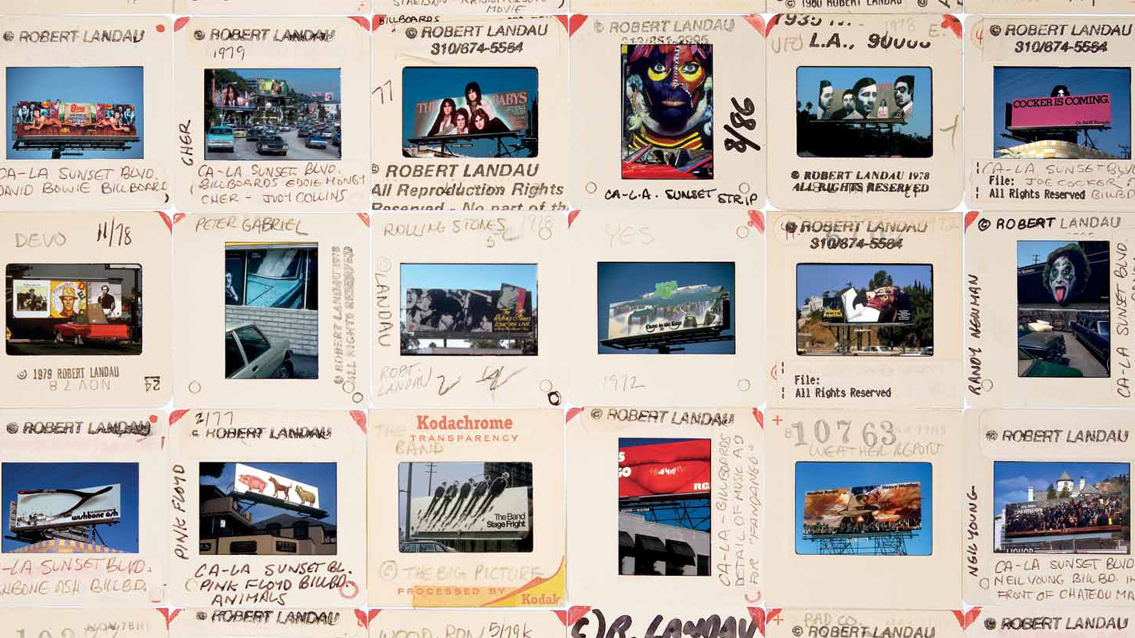 A few of Robert Landau's Kodachrome slides from Rock 'N' Roll Billboards of the Sunset Strip.

It's not only a catalog of music billboards in L.A., but also offers anecdotal insight into the rise and fall of an art form. Each billboard photograph contains information about the art directors, photographers and artists involved — including names you might recognize like Andy Warhol and Saul Bass.

To this day, Landau is still friends with men like Mario Rueda, now in his 90s, who made a living painting billboards by hand. He writes in his book:

"Whether he was painting Paul McCartney walking barefoot across Abbey Road or rendering some ornate marble statuary for a funeral home, [Rueda] brought the same natural talent and disciplined approach to his work, earning him the highest respect from everyone in the outdoor advertising business, where most considered him to be the greatest billboard painter of his time."

The outdoor advertising agency (and Rueda's employer), Foster and Kleiser, had a space the size of an airplane hangar for the creation of these billboards. Because they were hand-painted, no two were alike. And, like Rueda, many of the painters who worked on them were highly trained, with degrees in fine art. 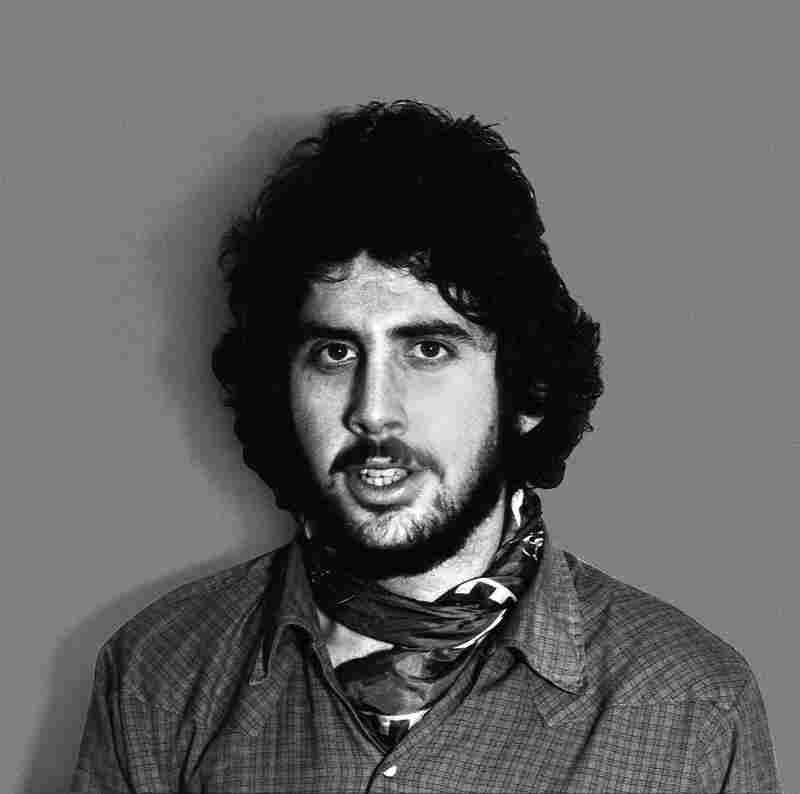 Robert Landau, back in the day. Courtesy of the photographer hide caption

toggle caption
Courtesy of the photographer

It was an ephemeral art form. Each billboard could take up to 10 days to create, and after hanging for a month, would be painted over. Landau's photos are all that remain of L.A.'s golden age of billboard art.

These days, Landau says he will occasionally photograph a billboard, though now it's all digital.

"At one time, L.A. just felt a lot funkier. It felt more Western, and ... people could come here and do whatever they want. To a degree, that created a lot of chaos, but there was something about that freedom that allowed people to do fun things," says Landau.

"Things were a little quirkier back then," he says. "There was a bit more of a personal feel to the environment."