Accessibility links
A Black And White 1860s Fundraiser : The Picture Show At a glance, they look like any other Civil War-era vignettes and portraits of children kneeling in prayer or cloaked in the U.S. flag. But, there's more to these cartes de visite than meets the eye.

They look like any other 19th century vignettes and portraits of children kneeling in prayer or cloaked in the U.S. flag.

But these cartes de visite (a calling card with a portrait mounted on it that was all the rage during the 1860s) featured Charles, Rebecca and Rosa — former slave children who looked white.

I saw a couple of the cards on Tumblr and wanted to know more about them, so I called Mary Niall Mitchell, associate professor of history at the University of New Orleans. Mitchell had researched the group for her book, Raising Freedom's Child: Black Children and Visions of the Future After Slavery, and gave me some history and context for the images.

Down For The Cause

The cards were sold in 1863-1864 by a group that included Union Maj. George Hanks and representatives of the American Missionary Association and the National Freedman's Relief Association to help raise money to pay for schools for emancipated slaves in New Orleans.

"They realized that the sympathies that people would have for children who looked white but had been slaves was going to be greater than the sympathy they might have for black-skinned children," she says.

And this group of portraits wasn't the first to be used in this way. In a September 2002 article Mitchell writes:

"The decision to display white-looking children was due, in part, to the earlier success of a girl child named Fanny Lawrence, who had been 'redeemed' [or adopted, perhaps] in Virginia. As Fanny had done, Rosa, Rebecca, and Charles captivated white northern audiences. In an account of the group's appearance in New York, these children were singled out: 'three of the children,' said the Evening Post, 'were perfectly white, and had brown hair.' " 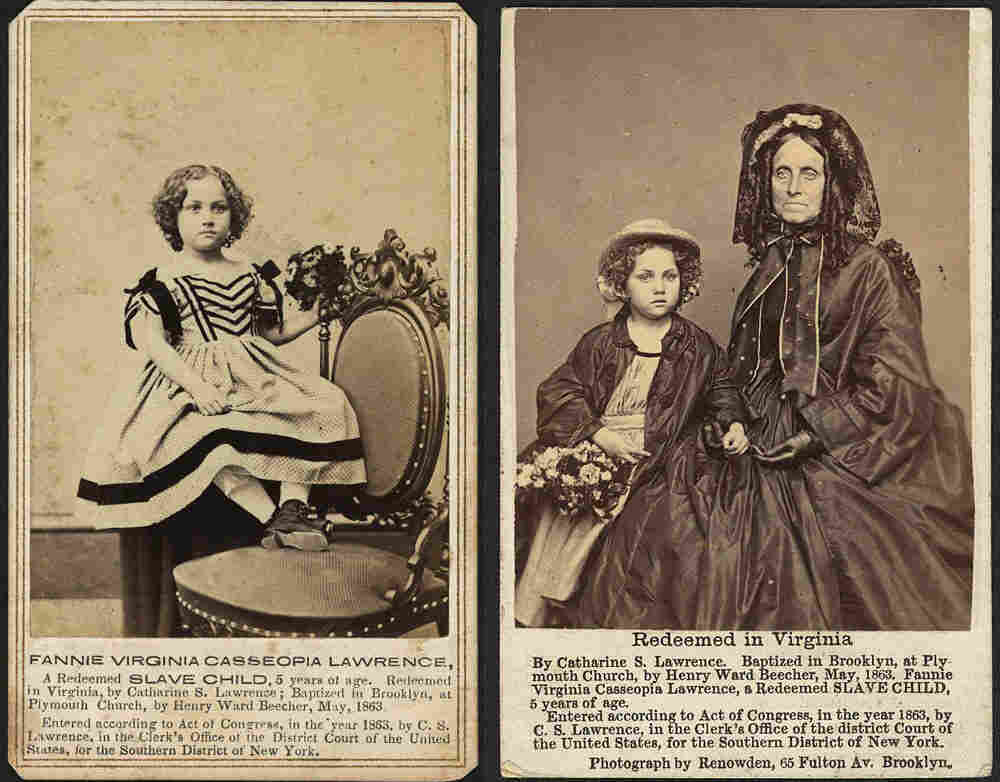 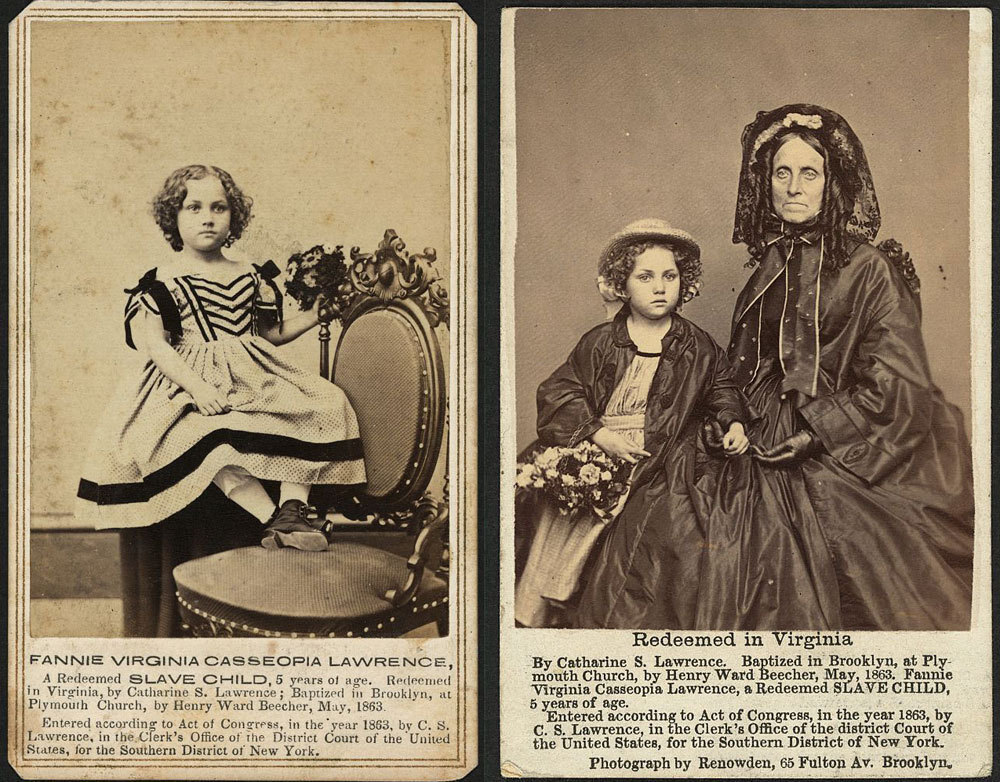 We're All In This Together

The way the children posed was deliberate as well, Mitchell says. Dressing the girls in frills and using prayer poses were ways to make the viewers think of their own children when they looked at the photos.

"I think the flag picture is probably one of the more evocative ones of both sort of the past and the future, because wrapping in the flag, it says, you know, they deserve the protection of citizenship and they are young people who will become citizens one day," Mitchell explains. 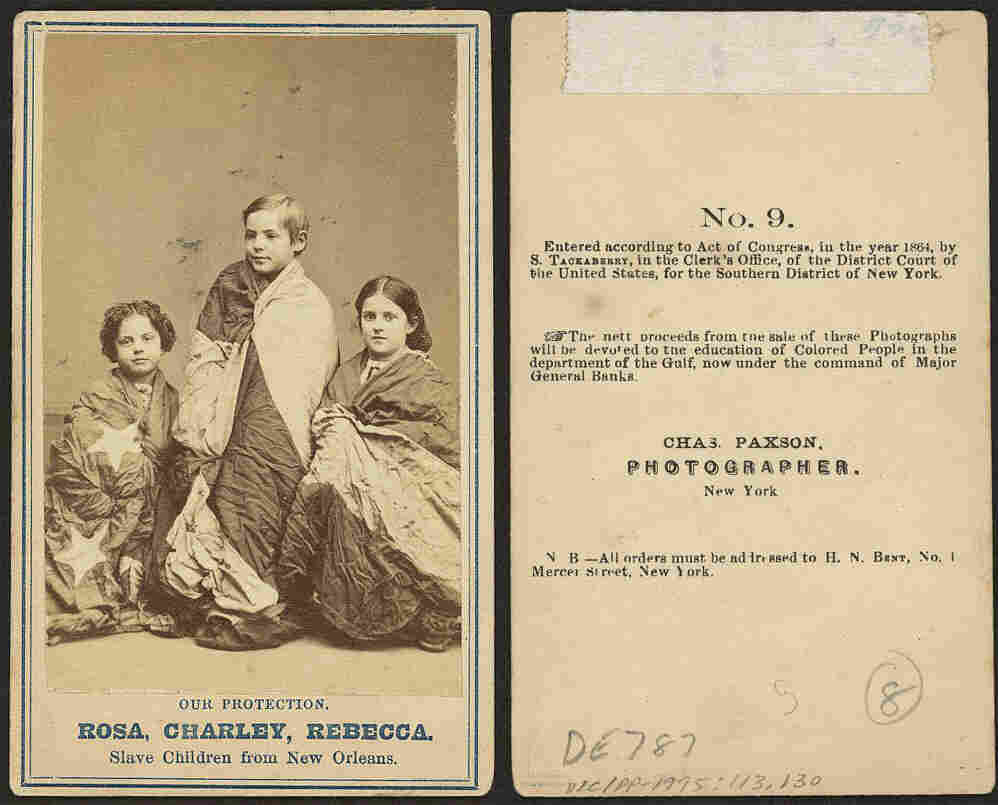 Rosa, Charley and Rebecca are three of eight freed slaves who sat for portraits in 1863-1864 that were sold to raise money to fund schools for emancipated slaves in Louisiana. The three were chosen because it was believed their near-white complexions would draw more sympathy â and support â from a country torn apart by slavery and civil war. Charles Paxson/Library of Congress hide caption

More importantly, Mitchell says, the portraits appealed to people's racial empathy at a time when they were angry about fighting to end slavery.

"There are deserters everywhere, basically people are fed up and tired and sick and poor and everything else, so these pictures were a way of appealing to people's sense that white people have a stake in this."