Accessibility links
Looking For Lost Memories In The Delta : The Picture Show Photographer Eugene Richards explains why, 40 years after his first visit to the Arkansas Delta, he decided to go back.

Photographer Eugene Richards had several reasons to visit the Arkansas Delta 40 years after his initial visit.

"I went back, ostensibly, to look at the culture and see if there was anything left of it," he says. Or at least — that was the pitch he gave National Geographic magazine, in hopes that it would send him there, which it did. You can see the story in the magazine's November issue.

Richards' real motivation for returning, though, he tells NPR host Jacki Lyden, was a bit more personal. He wanted to see what he could remember — to fill the ineluctable void in memory that comes with age.

"Every once in a while, in all of our lives, the void becomes a little overwhelming and you try to fill it. So I went back trying to fill an emptiness," he says. "I found that I couldn't even find the places that I knew profoundly." 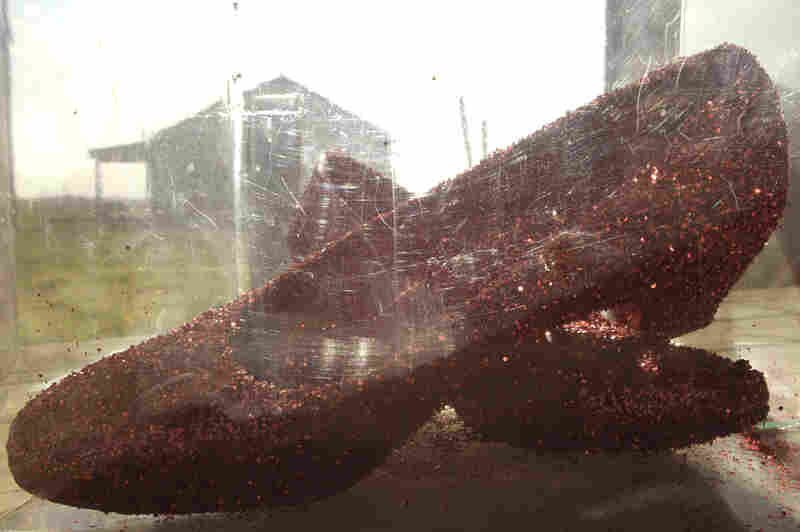 "Early one morning I was driving past a row of abandoned workers' houses when I spotted a pair of women's shoes on a porch. In a Lucite box, covered in ruby red glitter, they glowed like broken glass." Eugene Richards/National Geographic hide caption

Richards struggled to find the places he had known so well — for two reasons. Primarily because, as the National Geographic article explains, the segregated sharecropping culture that once typified the region has been all but eclipsed by industrial farming.

The challenge of digging up old haunts was even harder for Richards, though, because of his issues with memory. He suffered a serious head injury when he was younger. And though he rarely talks about it (because, in his mind, who wants to hire an injured photographer?), it has had a serious impact on his life.

"One of my reasons to go back was that I was embarrassed by it — that I couldn't remember my years there," he says.

Ultimately, though, perhaps it's a futile effort. Even those who remember everything can't control the way things change. The fact is, memories might remain intact, but people and places rarely do.