Accessibility links
Presidential Access: Unguarded Moments, Captured On Film : The Picture Show After combing through 95,000 images in its archives, the White House News Photographers Association has put together an exhibit of candid presidential moments — some well-known, some locked away for decades.

Every four years, we elect a president. And every term, the president is joined in the White House by his Cabinet and staff — and followed by a press pool intent on documenting the presidency. For those photographers, portraying the true personality and actions of a leader so protected can be difficult.

In 1921, a group was formed to help make access easier. The White House News Photographers Association (WHNPA) was started by 17 camera and motion-picture photographers who covered the daily activities of the White House.

Initially, WHNPA members were able to negotiate access to many intimate moments — although their heavy equipment made the job difficult. The first photos were made with clunky view cameras that worked poorly indoors in low light. And since shooting a candid shot wasn't easy, restaging scenes was not uncommon.

These days, of course, cameras are lighter and more versatile, but access isn't what it used to be. Candid shots are still hard to get — but now it's because of heightened security. 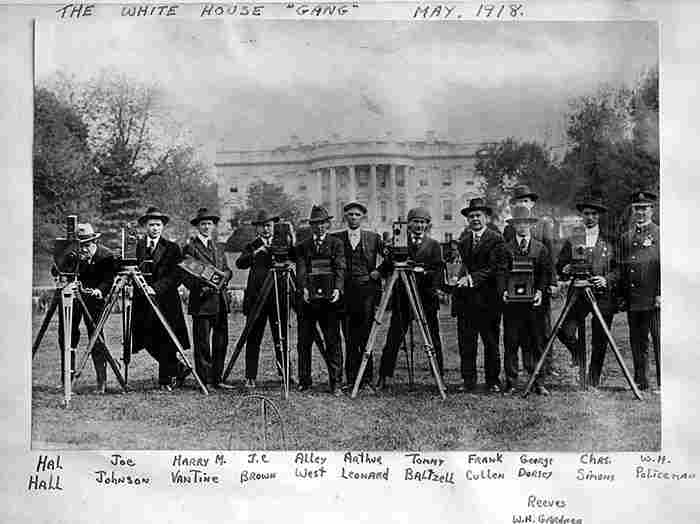 Photographers gather at the White House in 1918. Courtesy of WHNPA hide caption 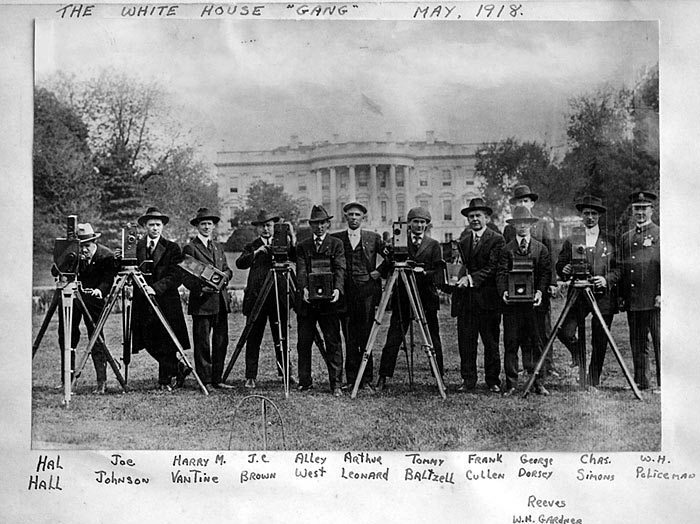 Photographers gather at the White House in 1918.

After combing through 95,000 images in its archives, the WHNPA has put together an exhibit of 78 historic photographs of some of those candid moments; some are well-known, while others have been locked away for decades.

"My favorite image is the one of John F. Kennedy during the presidential campaign sitting in an open-air convertible catching a bunch of bananas," writes WHNPA Treasurer Jon Elswick, who co-curated the exhibit with his wife, Heidi Elswick.

Dennis Brack, who received his White House press pass in 1965, tells an anecdote about President Truman — the only president who was also a member of the WHNPA: "We created a section [in the annual WHNPA photo contest] ... it was called the President's Class, and only the presidents could enter. ... He won every year."

Compare that with President Hoover and his wife, who had a "15-foot rule" to keep photographers at bay.

"We have the best jobs in the world," says Brack. "Sure, the hours are long, and you might have to work in the rain ... but the trade-off is pretty good."

The full exhibit of historic WHNPA photographs is now on display at the Edison gallery in Washington, D.C., until February.