War/Photography is a genre-defining exhibition currently on view at the Corcoran Gallery of Art in Washington. And also the last place I wanted to find myself on a sunny midweek morning.

As a photojournalist and picture editor, I've consumed my fair share of conflict photography, essays and films. How could this exhibition possibly be any different from all the other shows I've seen in this vein?

After all, it has the usual array of iconic war photographs: the falling soldier during the Spanish Civil War, Marines raising the flag at Iwo Jima and the Vietnamese general executing a suspected Viet Cong member.

And the catalog boasts an impressive list of legendary conflict photographers, going as far back to Roger Fenton and Alexander Gardner in the 1800s to more contemporary names like Don McCullin, James Nachtwey and Carolyn Cole.

The strength of the exhibition, however, lies not in the specifics, but in the presentation of our collective war story. Forgoing the obvious inclination to present photos chronologically, Anne Tucker, curator of photography for the Museum of Fine Arts in Houston, where the exhibition originated, forced a team of curators to step back from individual moments and see what patterns emerged.

"War/Photography" connects more than 309 photographs from 25 nationalities with conflicts spanning 165 years. "It's organized in the order of war," says Tucker, whose team took 10 years to cull images from more than 1 million photographs — after visiting private collections, museums, military archives and photographic agencies in more than 17 countries.

Walking through the galleries, you experience the images by themes and aspects of war — like recruitment, the wait, the fight, the rescue, aftermath, medicine, civilians, children, faith and homecoming.

On one wall titled "Aftermath: Shell Shock and Exhaustion," Don McCullin's image of a shell-shocked soldier made in 1968 hangs six frames away from Luis Sinco's 2004 image titled "Marlboro Marine." Taken nearly four decades apart, the men share a strikingly similar gaze, suggesting the horrors witnessed during conflict. Individually the images made an impact during their respective publications, but seen together they nod to a greater reality.

And as war reaches beyond the front line so does the exhibition. It also includes images from photographers you'd never associate with conflict — like Weegee, Diane Arbus and Richard Avedon.

"For me it's about the impact of war as it relates on a very basic human everyday life," says New York-based photographer Nina Berman, who has been photographing wounded veterans since 2003. Her image titled "Marine Wedding," made in 2006, captures a moment between Marine Sgt. Ty Ziegel and his bride on their wedding day. Ziegel was seriously wounded by a suicide car bomber in Iraq and spent 19 months in recovery. 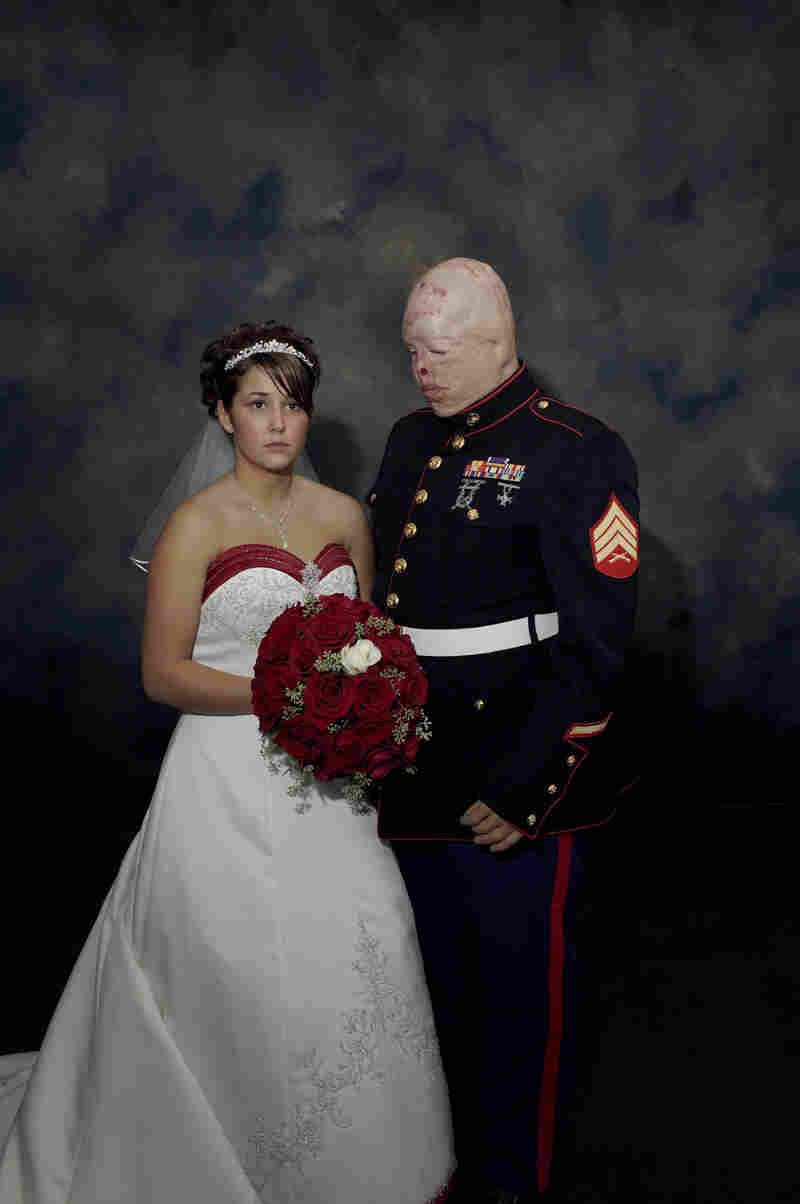 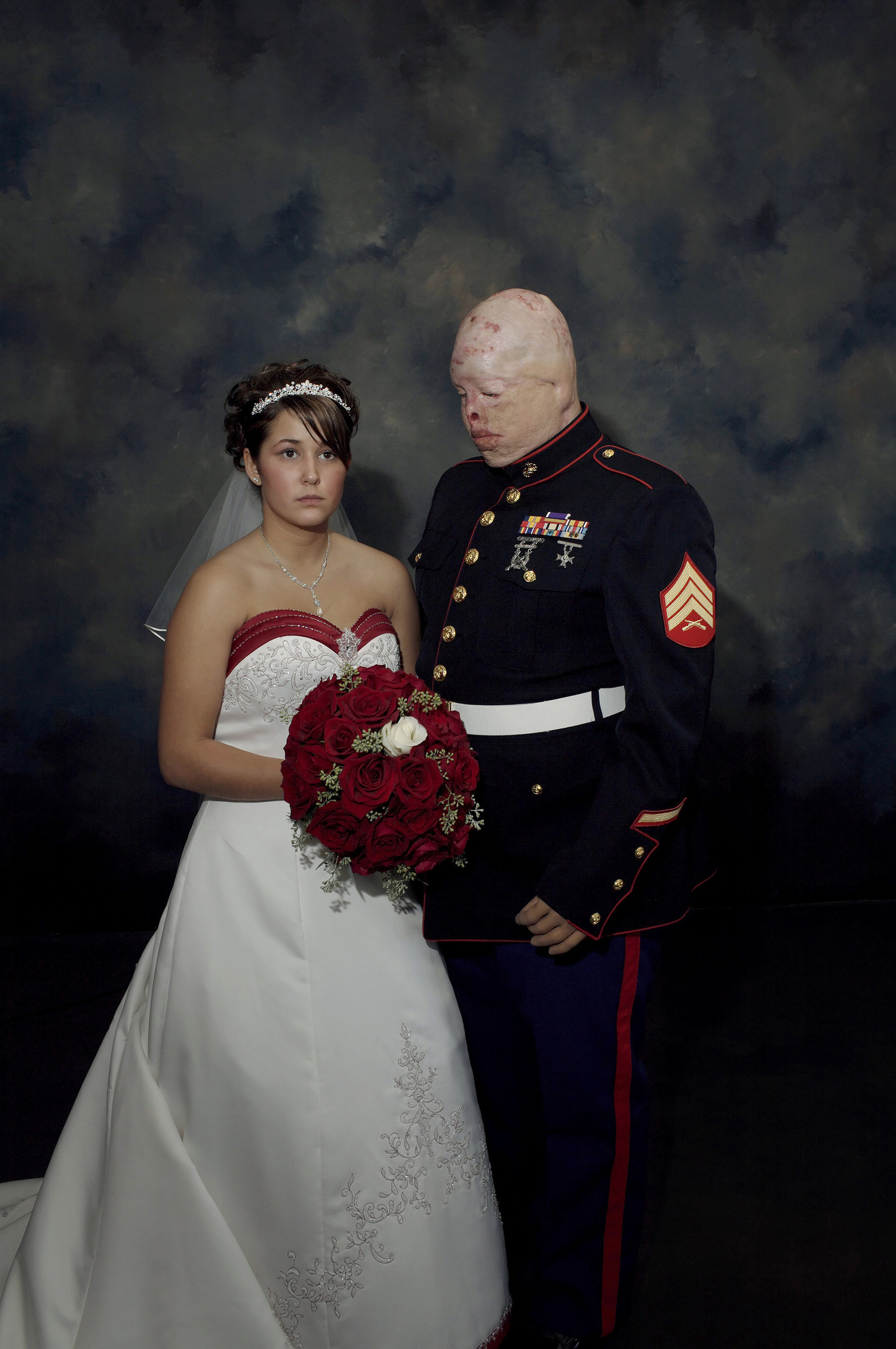 "In that moment I saw a shellshocked couple," says Berman. "That is what war does. It disturbs, distresses and changes the normal lovely course of life."

The image itself has had a life of its own, garnering Berman a World Press Photo Award and launching Ziegel into the national spotlight to discuss the failures of veteran care.

Years later, Berman sees the image as less about the couple and more of a symbol of the impact of war.

"I think that people can be taken aback by how [Ziegel] looks," she says, "but there are a lot of people that look like him. He wasn't a freak, an anomaly; that's what this war has done. People who would have died are surviving. That is the reality."

Berman's voice shuddered as she spoke about Ziegel's passing late last year. She says she often wonders: What does it all amount to?

If you strip war of its historical and political context, what you are left with is simply to wonder: Why has war been a constant throughout human history?

"Our main goal was to open up the discussion," says Tucker. "To put out in a coherent way a massively different approach to the subject — and let people parse it for themselves."

In the last room titled "Reflection," visitors can write their thoughts on a note card and pin it to the wall. One by Oliver, 7, read, "I want to go to college and not the war."

War/Photography runs through Sept. 29 at the Corcoran Gallery of Art and will finish its tour at The Brooklyn Museum from Nov. 8 through Feb. 2.

Initially we reported that 185 images were on display. That is actually the approximate number of photographers included in the show. The exhibition in D.C. includes 309 images, and nearly 500 images were featured in the exhibition's Houston debut.