Accessibility links
Photography Phone Call: Are Snapshots Dead? : The Picture Show Have you ever been invited to eavesdrop? Now's your chance. And afterward, share what snapshot photography means to you.

Photography Phone Call: Are Snapshots Dead? from NPR on Vimeo.

I cannot begin to fathom the number of snapshots that have been produced between the first Kodak camera (circa 1888) and now. Let alone how anyone could begin paring it down into a collection.

And yet for years, Seattle-based businessman Robert E. Jackson has been sifting through discarded memories, searching for that certain something — nothing in particular — found in vintage, vernacular photography. He knows it when he sees it. And he now owns about 11,000 one-of-a-kind prints.

Side Note: About The Music 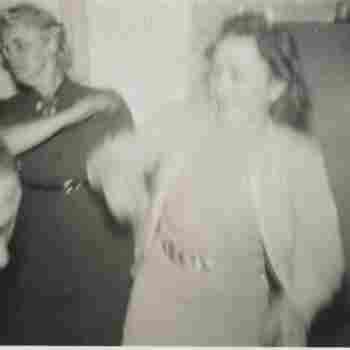 The photo on the cover of Faded Days, an album by the band Vocabulary Courtesy of Cameron Allen hide caption

The song in this video was graciously provided by Cameron Allen, i.e. the band Vocabulary. I came across his album, Faded Days, awhile back and had a hunch Jackson's photos might be up his alley. Turns out the entire album was inspired by a single found photo. Here's what Allen says:

"I found this blurry image in a thrift shop in Savannah, of ... people who seem to be dancing or something. I wondered how all these family photos just ended up here, and I felt like someone was missing them, and I felt subtly guilty for taking them away. ... A part of me wanted to use this as a cover image with hope that someone might come across the photo and recognize them. I guess I was thinking I might find its home."

How has photography inspired you?

Jackson is most likely unknown except to those in the art world. But he must be onto something because in 2007 the National Gallery of Art in Washington, D.C., devoted an entire show to his collection. He has also had a show this summer at New York City's reputable Pace/MacGill Gallery — and both institutions have shared some of his photos with us.

If the 2007 exhibit was a general introduction to the cultural significance of snapshot photography, the New York show is a bit more specific. Titled "Snap Noir," it exhibits, above all, Jackson's ability to curate and collect around a theme.

To quickly explain his method: He does most of his shopping on eBay — and the photos have often passed through many hands before reaching him. They're often first discovered at estate sales, then sold at flea markets, then purchased and curated by eBay vendors — who then sell to collectors like Jackson.

In the process, a bin of family photos gets whittled down to, say, a series of people blowing out birthday candles. Suddenly, a theme emerges. A story. (Albeit one often unintended by the photographer.)

"It's all about the mistakes," Jackson says, describing the things that catch his eye — like double exposures, lens flares or people in the air. The quirky. The curious. The intimate.

"I look for things that have an immediate dramatic impact," he says, "what the photography tells us about human psyche. I'm drawn sometimes to things that are a little darker. Now what that says about me I don't know."

Granted: There's a ghostly quality to old photos in general — not just Jackson's collection. I rummage through those flea market photo bins all the time and often wonder: What became of these people? Are they still here? How did they end up separated from their memories?

The Pace/MacGill exhibit seems more specifically to be a celebration of the odd. The photos leave me thinking a few things: People are really weird. And wonderful. And Jackson knows how to connect the dots. One man's mistake, it seems, can be another man's muse.

I could go on. And in fact, Jackson and I did on the phone. Our conversation lasted about an hour — but here's a condensed version for your eavesdropping amusement. One of the more interesting things we discussed: Is the snapshot dead?

We all know there's been an exponential spike in picture-taking this past decade. But there's probably also been an inverse spike in the existence of printed photos. And what will that mean for collectors like Jackson 50 years from now? What will it mean for museums and archives trying to make sense of who we were?

What is a snapshot today? Does it have value?

A Photography Phone Call: On Life, Faith And Trains