Accessibility links
Photographer Explores Relationships With Guns In Portrait Series : The Picture Show Photographer Kari Wehrs found gun owners in the Arizona desert for a series of tintype pictures. She says gun owners and gun control advocates "both want to be heard." 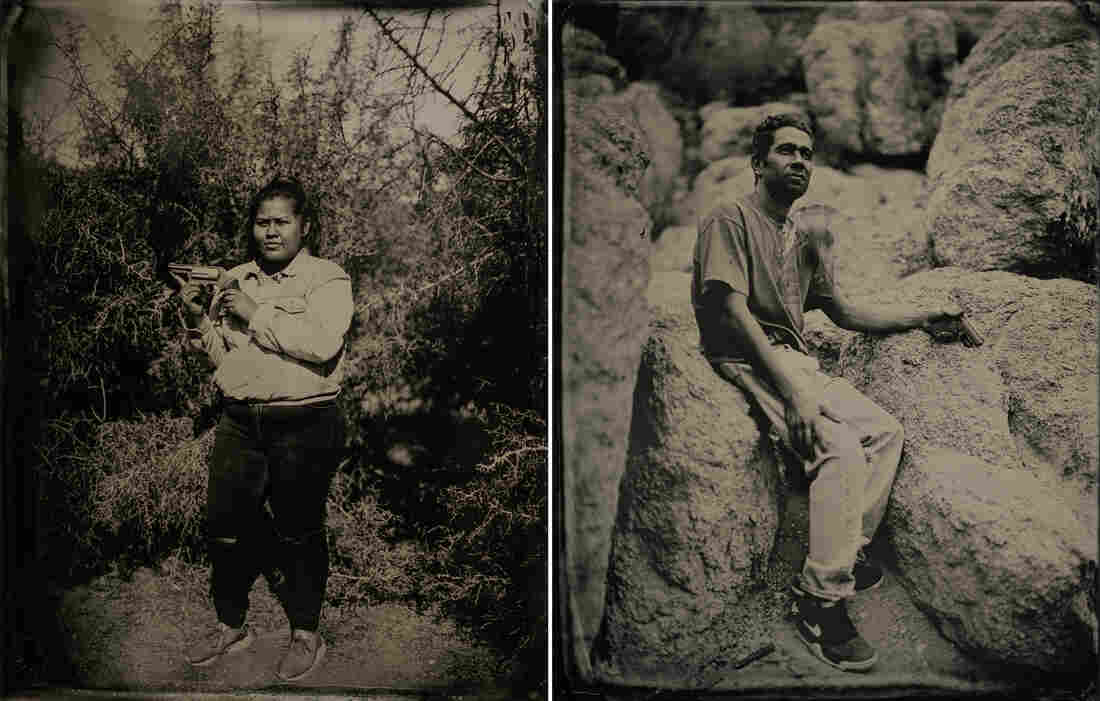 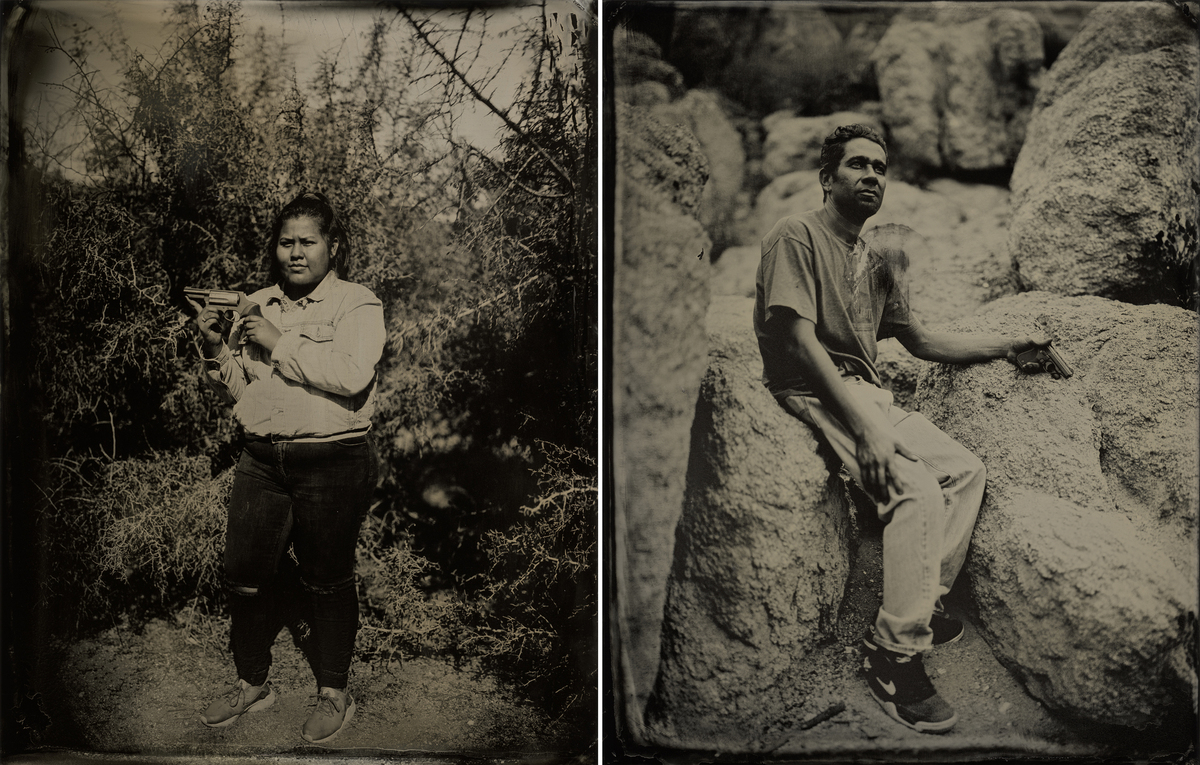 Photographer Kari Wehrs was shocked when she found out four years ago that her 61-year-old mother had started carrying a handgun for self-protection.

Her family never had guns when she was growing up in a midsize Minnesota town. Wehrs' mother said no particular incident had sparked her decision. 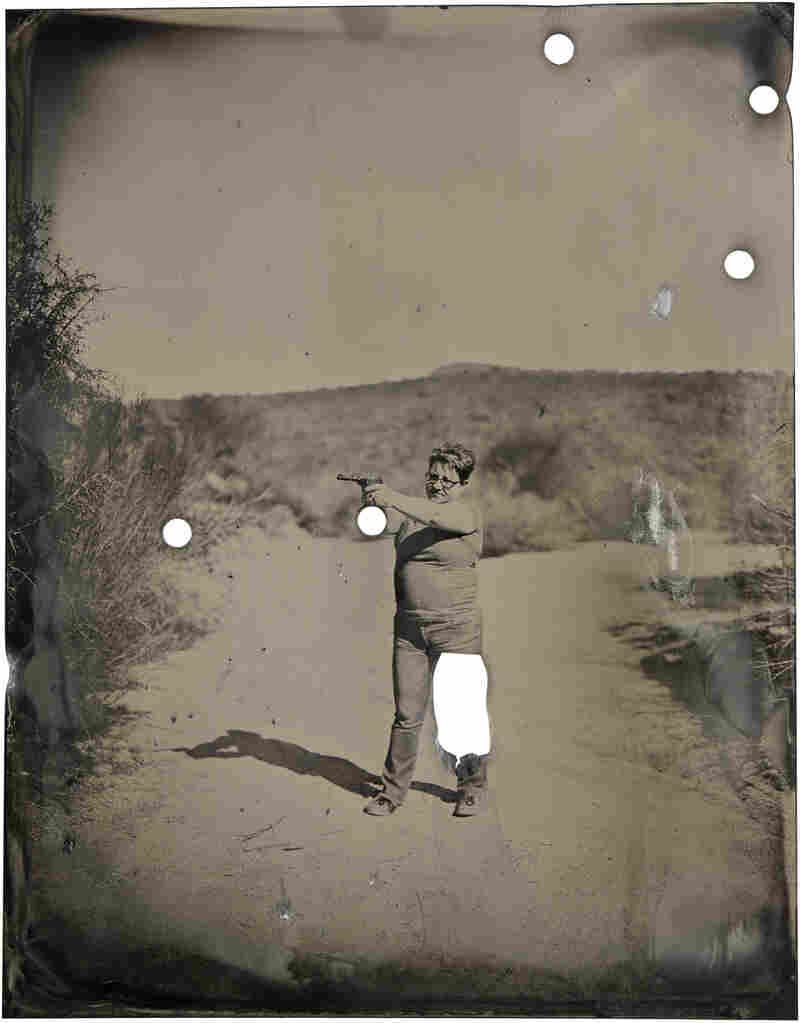 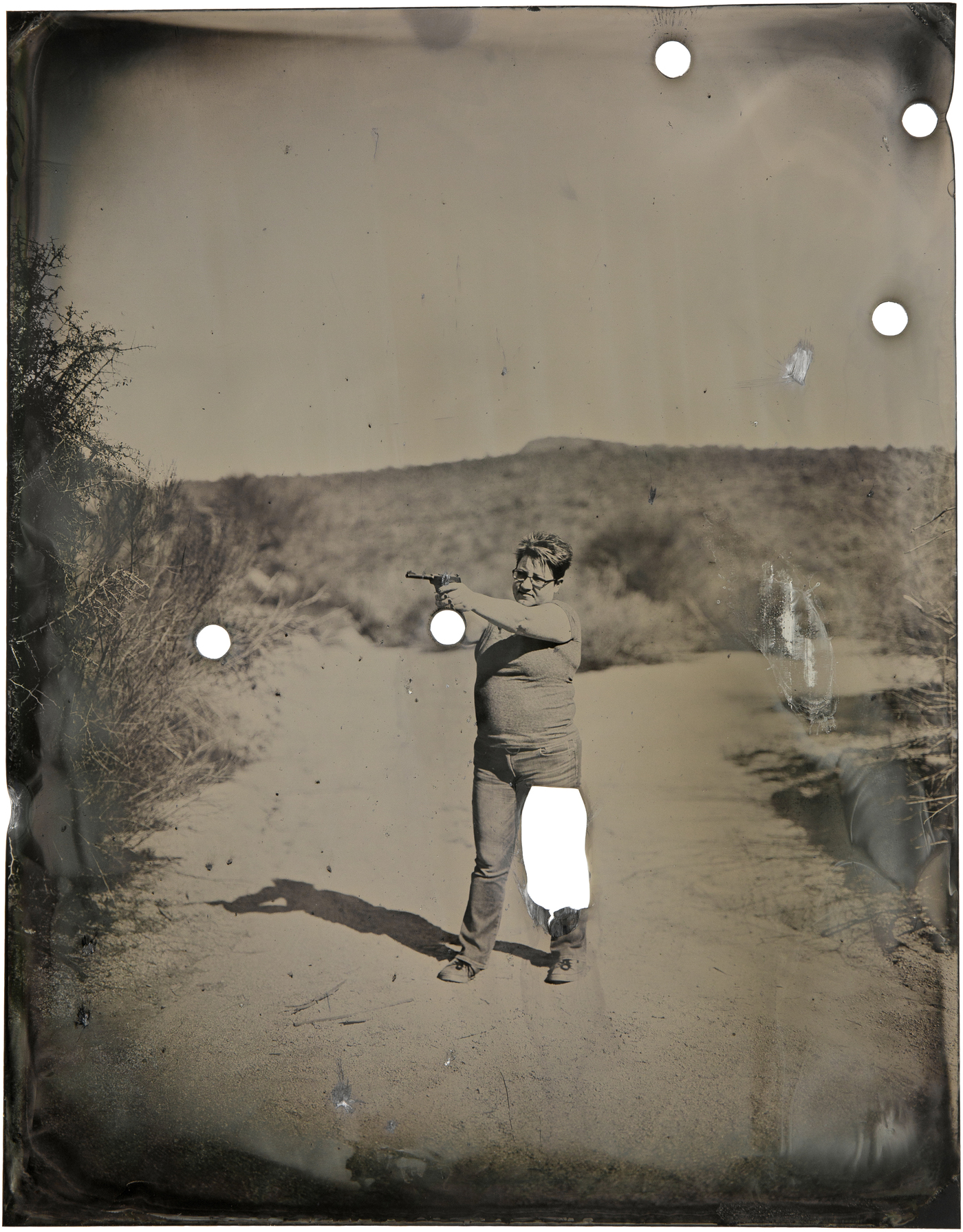 Guns and gun owners had made her uncomfortable in the past, Wehrs says. She wanted to know how her perspective and her mother's had diverged on the issue — and maybe learn how people came to different conclusions on guns more broadly.

She set out to meet gun owners for a project called Shot, involving what Wehrs calls the singular "the gun."

" 'The gun' emphasizes or hints to its symbolism," she says. "In other words, the topic is layered and complex, and I think the gun is sometimes an object for something else, like control, fear or power."

She decided to use a photography process called wet collodion, an early photographic technique, where a photographer coats a piece of glass or metal with a series of chemicals, some of which are light sensitive, and exposes it, still wet, to light through the camera.

Wehrs uses metal plates, creating what are called tintype photographs. It's a process that was also used to photograph Civil War soldiers.

The photos reference both the divisiveness and portraiture style of that time. Like Wehrs' subjects, Civil War soldiers often posed with their weapons.

Each photograph is made in the field and processed in a portable darkroom that Wehrs sets up before approaching people to sit for her images.

Wehrs' interactions with people start with the basics of getting their first name for the photo's title. Conversations then range much further, from joking about differing politics to discussions of faith. She spends about an hour working and speaking with each participant.

After processing the image on a metal plate, she offers it back to the subject to use, if desired, as target practice.

Wehrs talked with NPR about what she's learned about gun owners and what can help bridge political divides over gun control. This interview has been edited for length and clarity. 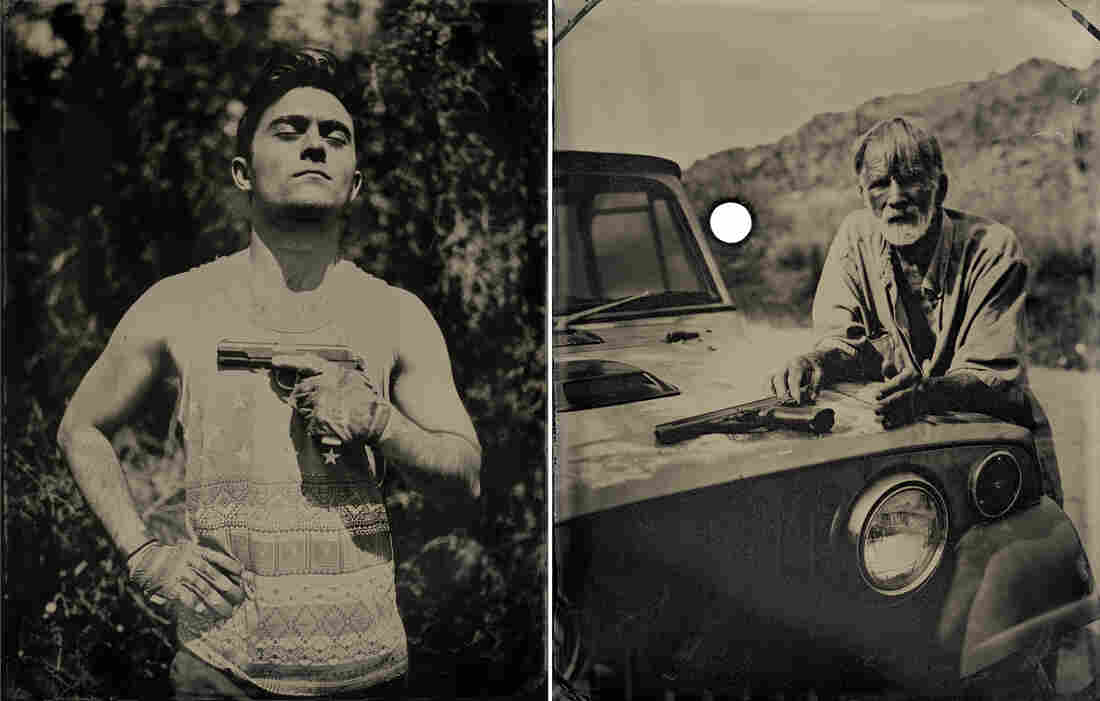 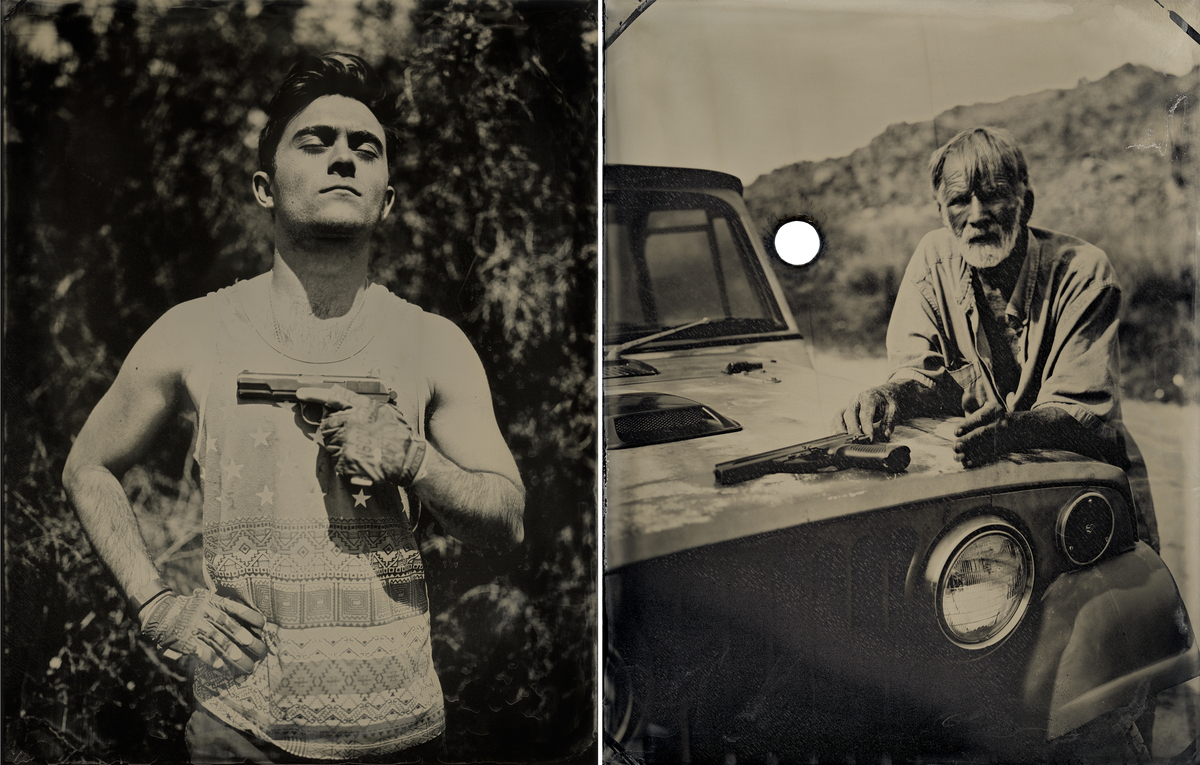 What got you started working on this project?

I began this project in 2016 as a first-year graduate student in photography at Arizona State University. The basic seed for the work was realizing that I had a stronger opinion about the gun than I had ever voiced. Though the idea of the gun and gun enthusiasts gave me a feeling of fear and discomfort, my curiosity was also piqued. 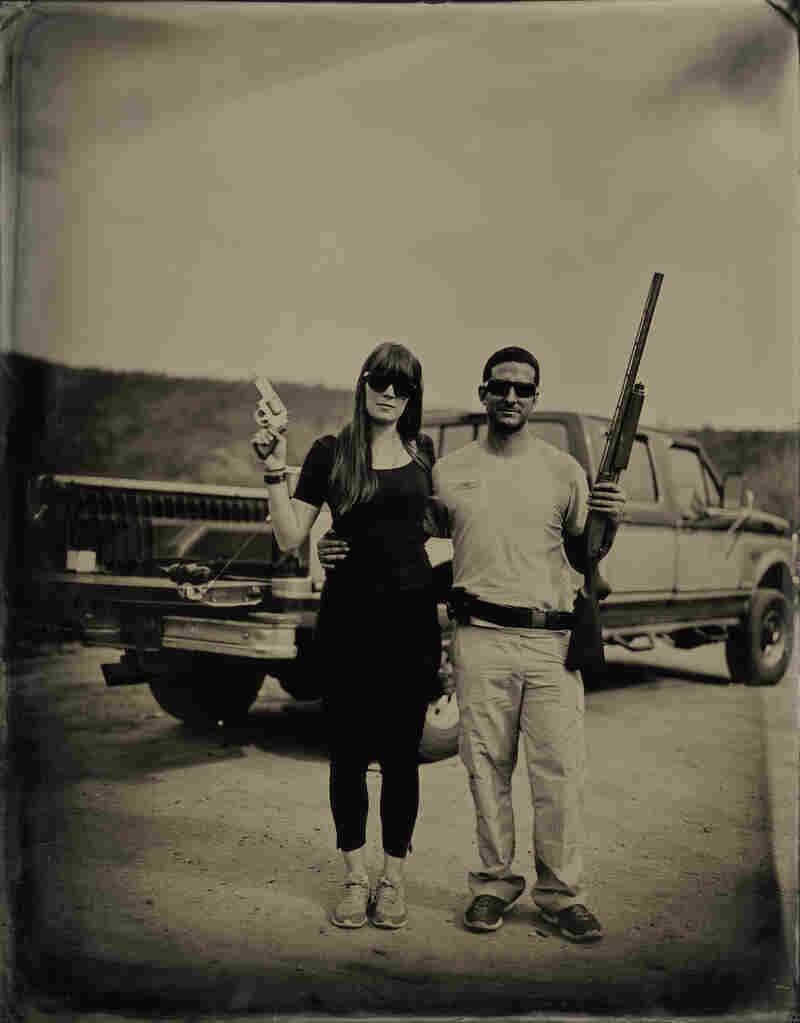 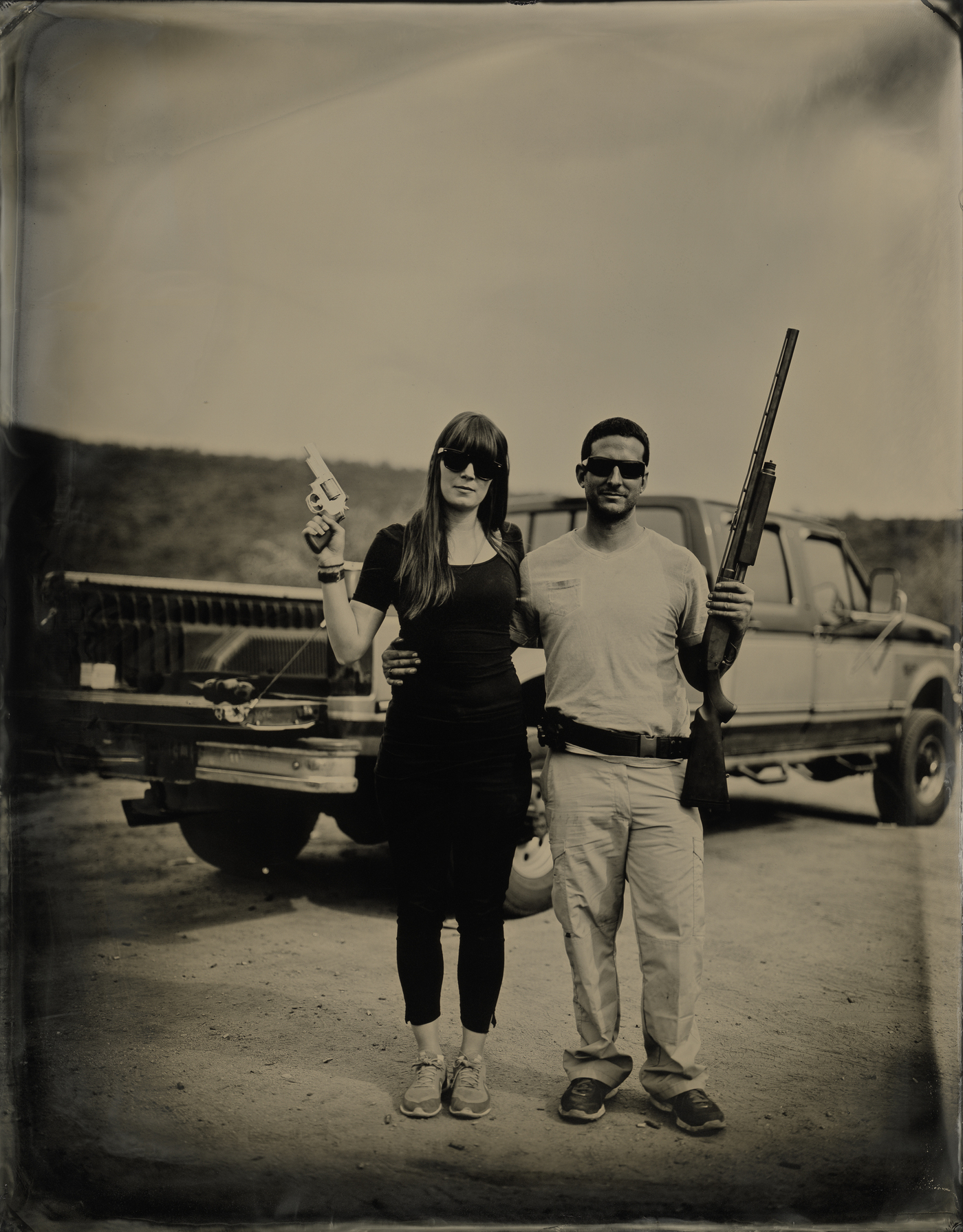 In a short amount of time I encountered three specific and varied references to the gun that stayed with me. The first was when a new friend told me her stepson was one of the people killed in the 2011 shooting in Tucson that targeted Gabby Giffords. I remembered news about that day, but standing with my friend and looking into her eyes, seeing her expression and hearing her voice as she talked about it affected me in a new way.

The next incident occurred around this same time, which was only a couple of weeks after moving to Arizona and starting school. I was driving down the interstate and the overhead electronic boards read, "I-10 shooter tip line." There had been a number of reported instances of someone shooting at cars as they drove down the interstate. My first thought was, "Is this normal?" which was followed by feelings of disgust that I had to ask myself that question in the first place.

The last incident was the most surprising: My 61-year-old mother began carrying a handgun.

What are some of the challenges you face doing this type of photography in the field?

Working with the wet plate process in Arizona can be difficult because of the heat, the dust, the very low humidity and, of course, the relentless sun. The chemistry can get finicky at high temperatures. I don't work on this project once the temperature reaches 90 degrees. Even on cooler days, my darkroom tent (which is a portable ice fishing shelter) gets very hot inside because there is so little shade in the desert.

I am not making appointments with people that I've met previously; I meet people on the spot. I don't go to official gun ranges. I go to locations that are heavily frequented for target practice. If it's a slow day where I set up, I have to be patient and wait for people to show.

There is so much, physically, that I need with me for the project: gear, chemicals, darkroom tent, table, etc. It takes me 45 minutes to set up and run a test plate before I approach a potential participant. It's not the kind of setup that I can quickly move to another area if my current area isn't populated.

Is there any one image or experience from this project that stands out to you?

Earlier this spring I introduced myself to Aaron and some of his friends. [When talking to them about politics and guns] the conversation quickly turned to the importance of opposing sides actually hearing each other out. It's interesting to find common ground like that, where you realize you may not desire the same outcome as the person beside you, but you both want to be heard and you want to be treated and to treat others with decency. This project has proven this over and over. 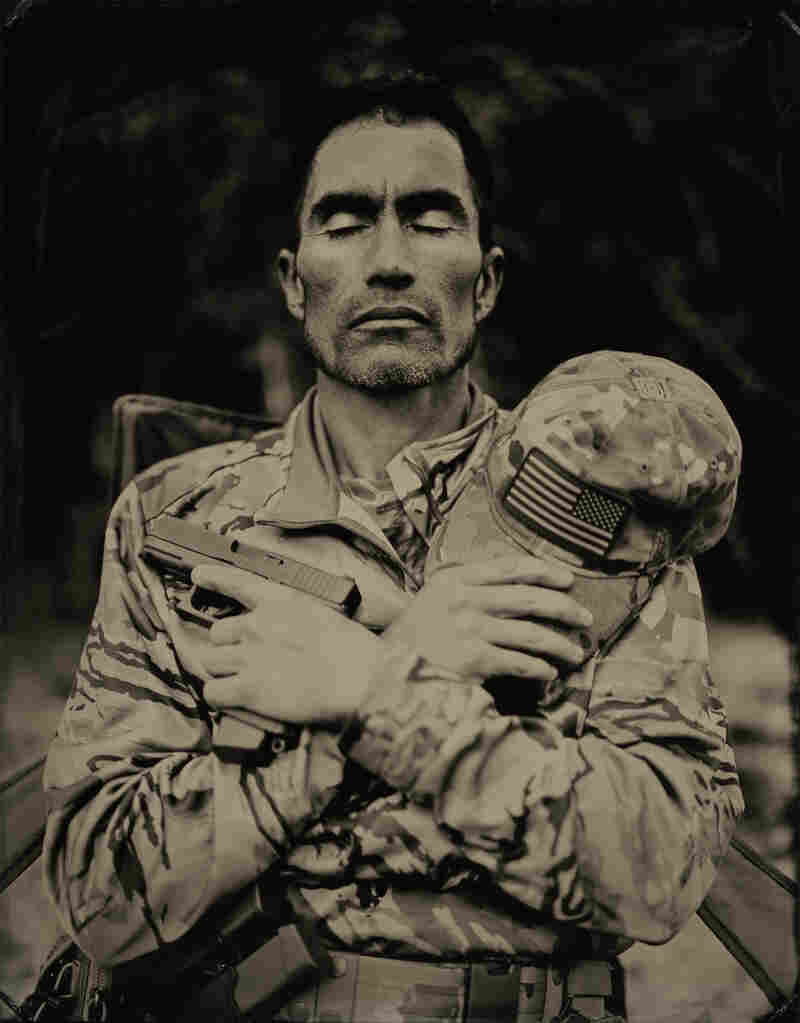 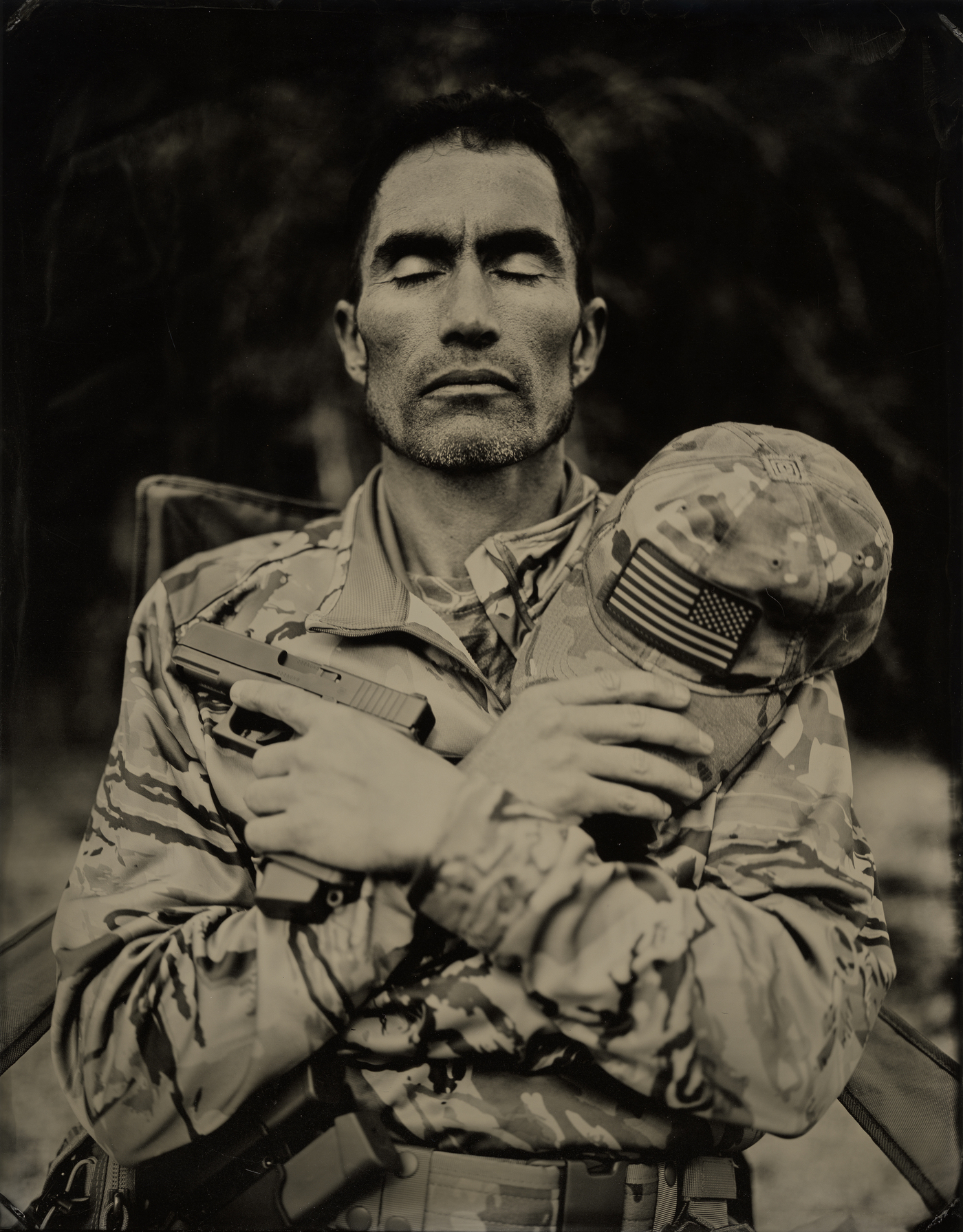 His portrait is my recent favorite. He doesn't necessarily feel like he belongs on one political side or another, but instead places his strong belief in God as the answer to how we might get beyond our current divisiveness. I walked away from that day feeling moved — and not even specifically by his religious beliefs — but by his sense of understanding that I was interested and open to hearing about his and others' ideas, beliefs and opinions.

What have you learned since you started?

I've learned that this topic is much more nuanced instead of the binary black and white that often gets discussed. For example, many of the people that I've met for this project want restrictions to help ensure that guns don't easily get into the hands of those who might use them inappropriately.

I've also learned that while I do not have the answers to solve our cultural divide pertaining to the gun (or other topics of today), I will still remain hopeful. 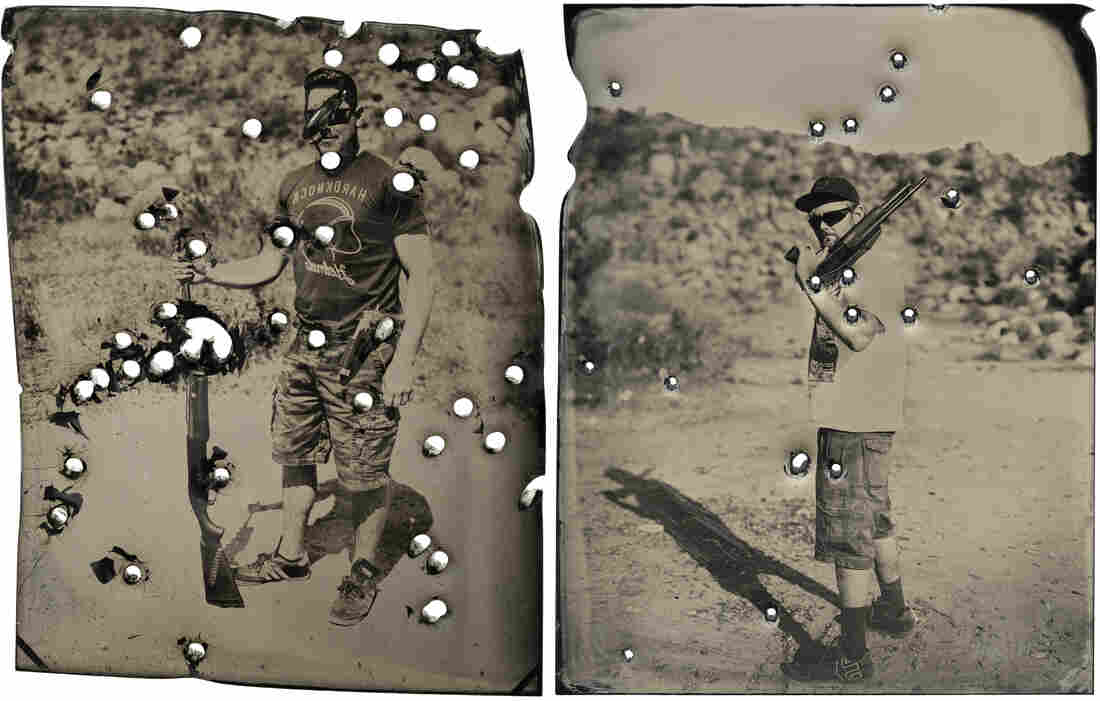 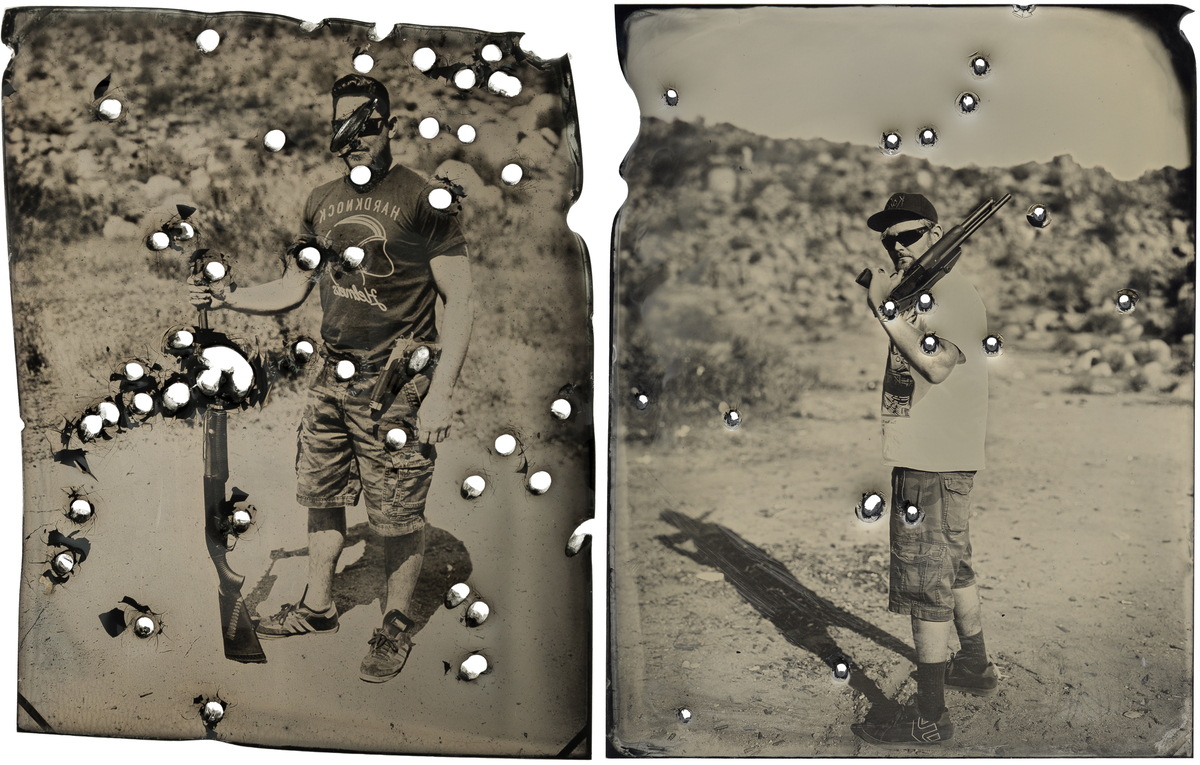 Kari Wehrs is a photographer represented by Tilt Gallery in Scottsdale, Ariz.