Accessibility links
Finding Community Among The Ashes: How Faith Reaches Across Distance : The Picture Show Photographer Greg Miller has spent over 20 years documenting Catholics on Ash Wednesday. As Lent comes to an end, his photos highlight the power of the bonds of faith.

Finding Community Among The Ashes: How Faith Reaches Across Distance

Finding Community Among The Ashes: How Faith Reaches Across Distance 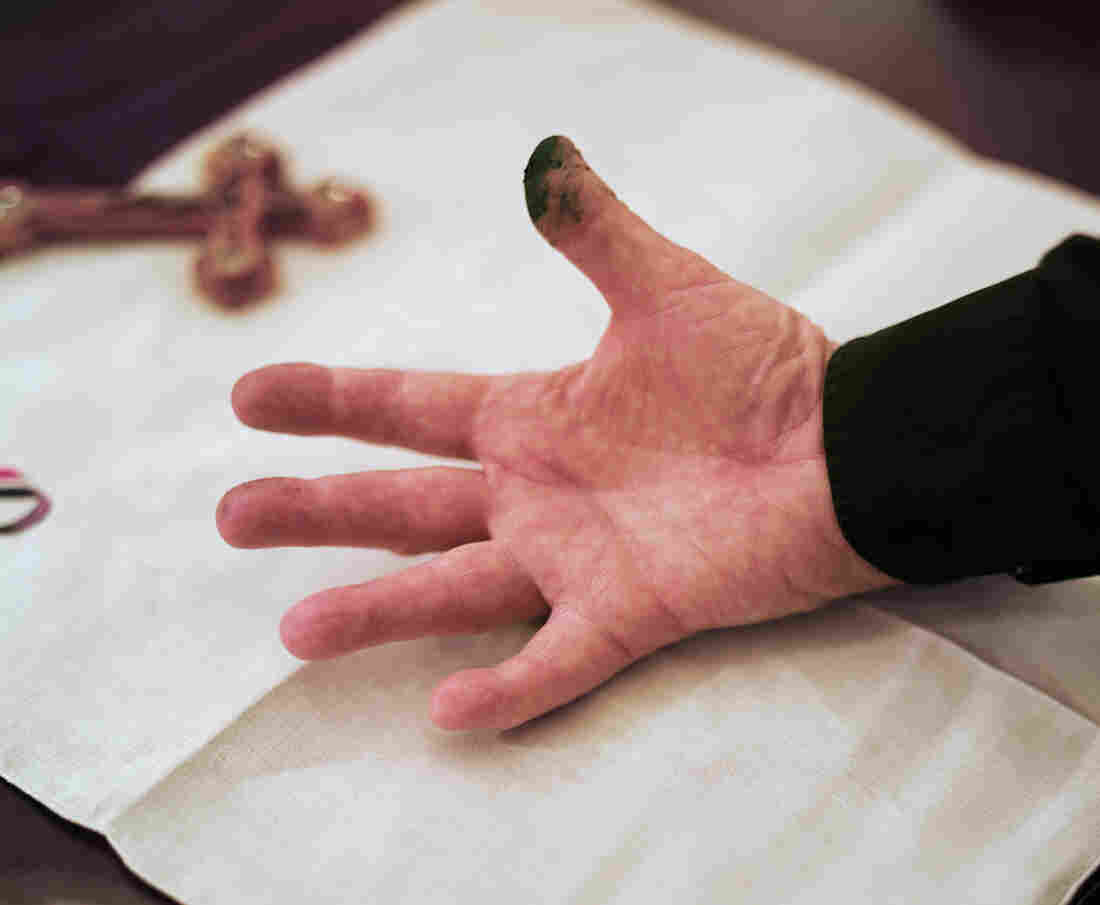 The thumb of the Rev. Patrick Conroy, chaplain of the U.S. House of Representatives, is stained from ashes he made this year for Ash Wednesday. Greg Miller for NPR hide caption 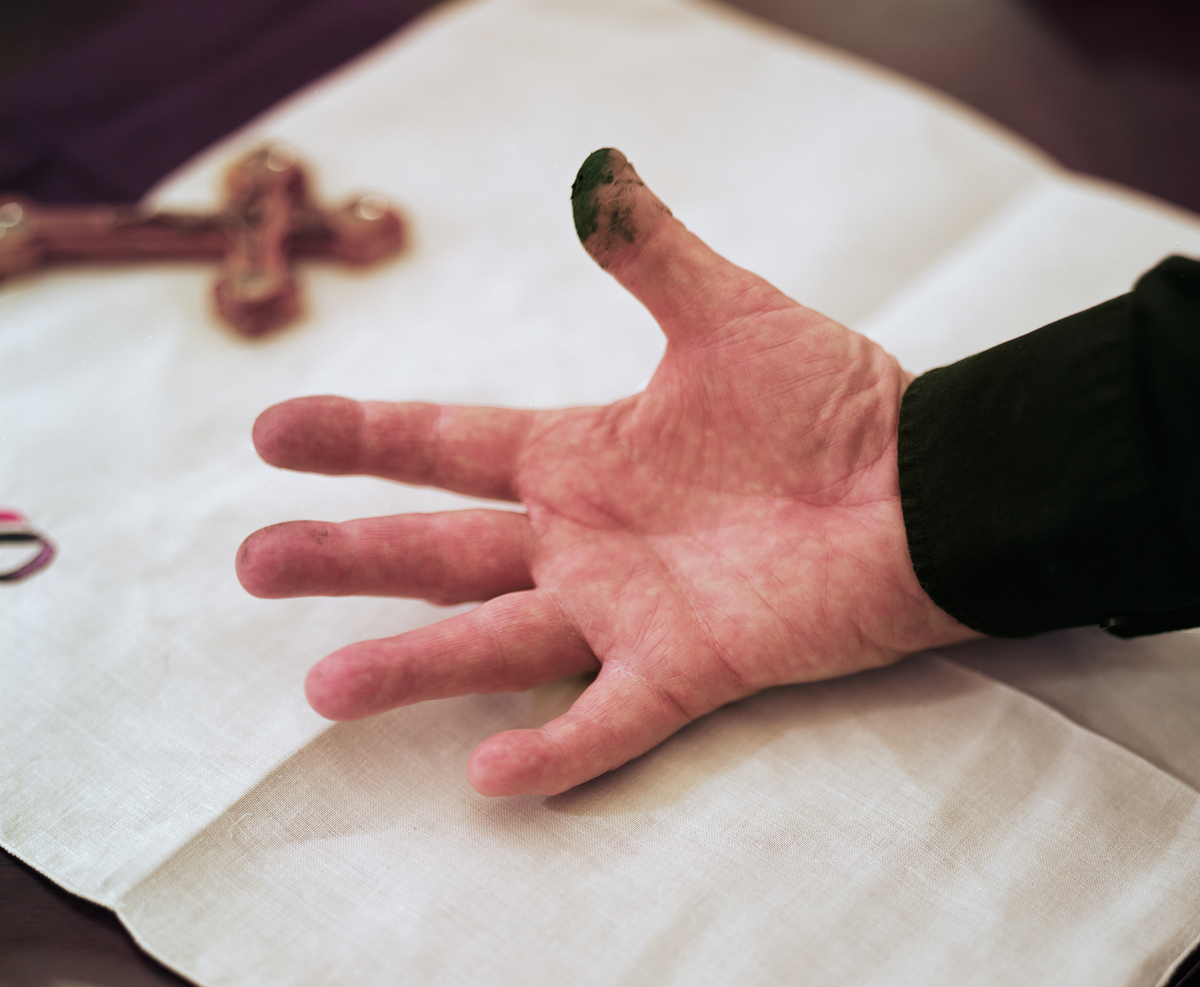 The thumb of the Rev. Patrick Conroy, chaplain of the U.S. House of Representatives, is stained from ashes he made this year for Ash Wednesday.

Every Ash Wednesday for over 20 years, photographer Greg Miller has lugged a large format camera around New York City, taking photos on old-school film, and capturing how Catholics across the world perform this devotional together.

This year, instead of New York, he brought his camera to Capitol Hill to photograph members of Congress, their staff, lobbyists and religious leaders and discuss what Ash Wednesday means to them. 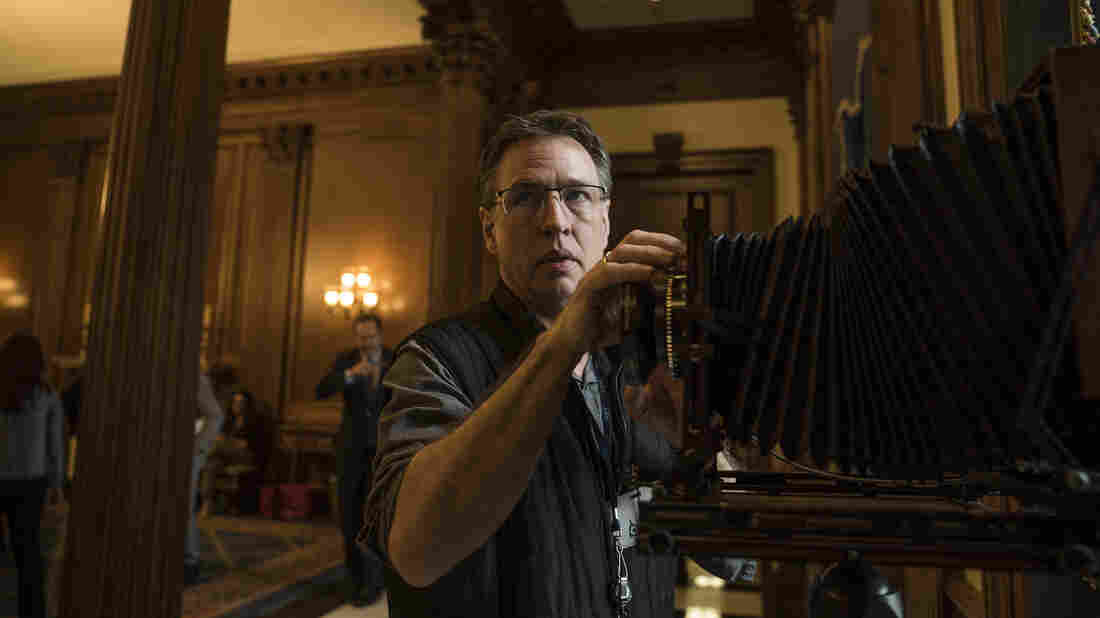 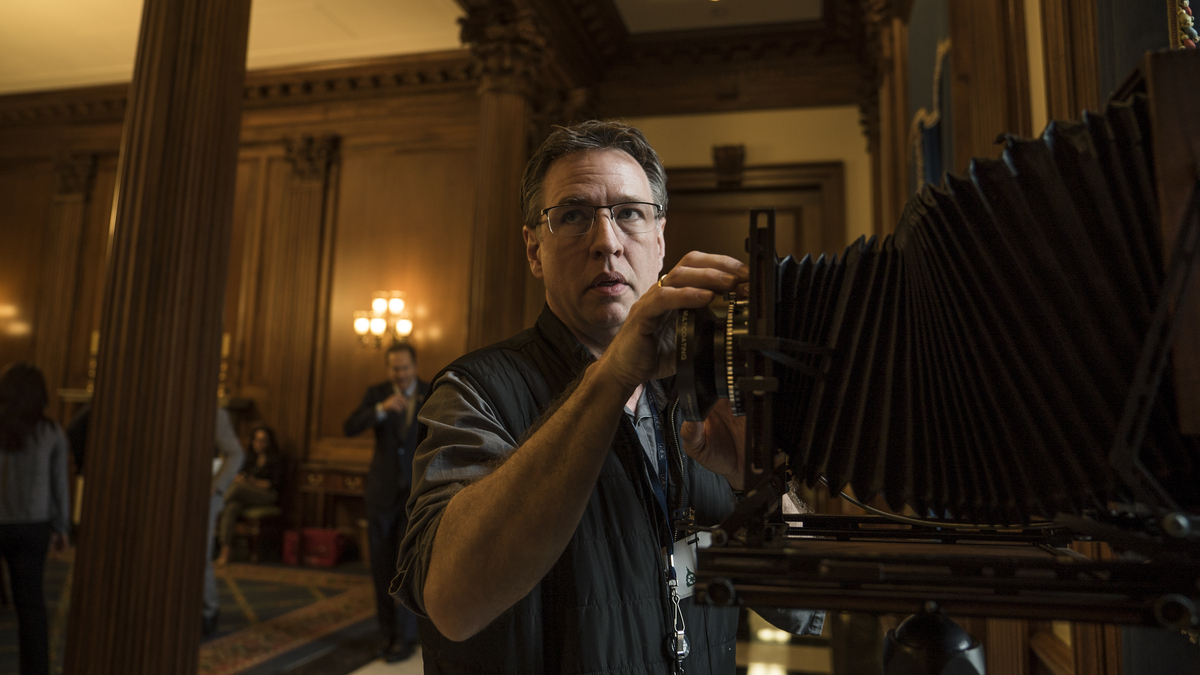 Photographer Greg Miller sets up his camera in the Rayburn Reception Room on Capitol Hill.

Miller arrived in Washington in late February, just as Lent was beginning, but weeks before the coronavirus would come to fully grip the nation. It was a time when people could still attend church and celebrate their faith together.

Some 40 days and 40 nights later, the world feels like a very different place. While Lent has always been a time for self-reflection and sacrifice, this year, with millions sheltering in place and a global pandemic swirling around them, the season has taken on new meaning for many Christians.

Still, in their February conversations with Miller, Christians from all types of different backgrounds paused to reflect on their faith and discuss the importance of religion in their lives. The themes that emerged — community, togetherness, renewal — are perhaps more resonant than they could have known, and help highlight how the bonds faith can connect people across time and distance.

Jack Cline is a lobbyist for the University of Kansas. When he met Miller, he had only 10 minutes to stop before rushing to a meeting. In that time, he spoke adamantly about his faith.

Miller caught Regan, who asked only to be identified by her first name, as she was stepping through the Rayburn Reception Room on Capitol Hill.

Regan was "born and raised" Catholic back home in Marietta, Ga., and said her faith plays a prominent role in her life.

These days, she said, between her internship and school, she doesn't have the chance to attend mass as much as she used to. But Ash Wednesday is important to her, so she made it a point to go to church before work on Ash Wednesday

"My faith guides everything that I do and it encompasses everything that I am," she said. "Being Catholic, we're called to love everyone, you know, and love our fellow Americans and fellow people. I think that being on the Hill, it's definitely guided many things in my life. And it means a lot to me."

Ash Wednesday was a voting day for Congress. In between votes, representatives would rush out to stand in front of Miller's camera while aides watched the clock closely, ushering lawmakers back to the chamber as the next vote started.

Rep. Veronica Escobar (D-Texas) was the first to come off the floor to pose for Miller's camera, the smudgy cross dark on her forehead.

Escobar recounted growing up in a deeply Catholic home on the U.S.—Mexico border. She confessed, though, that she isn't "a great Catholic."

"I don't actively practice as much as would make my mother happy," Escobar joked.

Kidding aside, she called Ash Wednesday a reminder of her values, saying it helps her "honor" what she learned as a child in church.

"I just remember the feeling of renewal," Escobar said. "There's something so beautiful and profound in the tradition of death and rebirth. Death and renewal. Forgiveness. Suffering for a cause greater than you. For people who are bigger than you. For a community. For each other. For one another."

"I always get my ashes on Ash Wednesday," said Rep. Virginia Foxx (R-N.C.). "I think it's a really important reminder of who we are as individuals. And while we have important jobs to do, we are, as the priest says, from ashes you come and from ashes you go. And it's important to understand that."

Faith is a major part of Foxx's life. She reads devotionals daily, and even authored a book about how legislators use faith to guide their policy.

Foxx told the story of how earlier this year, she was visiting her district when a young woman walked up to her and thanked her for a bill she helped pass when she was still in the state senate for foster family aid. Later that same day, Foxx said, she met another man who thanked her for the same thing because he and his wife had been a foster family at that time.

"I am so humbled when I get messages like that, and I tell people those stories so that I hope that will encourage them in their walk of faith ... When I get signs like that ... I believe that I am doing the right thing."

Beliz grew up Catholic in Mexico City, and for her, faith is a way to reconnect with her roots.

"When I moved back to the U.S., a way to get in contact with my culture in a way [was] to remain practicing, [and] not just my Spanish," Beliz said.

She carries her faith with her daily, asking herself if she is showing love to others; whether "it's something small, getting a coffee, saying thank you in a really nice way, [or] giving a hug."

Rep. Ruben Gallego (D-Ariz.) said his first memory of Ash Wendesday was in a small farming town in Mexico where his family is from. He was a small child, but remembers watching the farmers and ranchers march through the town after work, recieve their ashes and then go home to rest.

"It's always a good reminder for me to get my ashes that I should be a good person, be a good Catholic and try to live up to the values that I think Jesus Christ would want me to," he said of Ash Wednesday.

He continued: "It's great to see some of my colleagues that I did not know were Catholic ... It's great to see them also professing their faith. It makes you feel like there's this little community, both Democrats and Republicans, and they're on the inside and in some kind of club."

Before ever becoming a politician, Rep. Juan Vargas (D-Calif.) studied to be a Jesuit priest. On Capitol Hill, people teasingly call him "Father."

Lent is his second favorite season — "I like Christmas better, to be frank" — because it reminds him to be positive, and to do good things for other people. During Lent, Vargas spends 15 minutes a day reflecting on his actions and whether he is truly living his faith.

Vargas said he has seen how Ash Wednesday can transcend culture. He and his wife fostered a Muslim family during the Kosovo War, and despite a language barrier, they slowly started to find the similarities in their religions. Both Lent and Ramadan call for fasting, prayer and devotionals. But, Vargas laughed, coming back after church with ashes on his forehead still shocked the family they were fostering.

"I chose to become a Christian and to become a Catholic," said the California Democrat. He was baptized in college, but he'd gone to St. Ignatius High School in Cleveland, Ohio, which he says had a "profound effect" on him.

As a member of Congress, he said faith is an important guide when it comes to crafting legislation.

Lieu wasn't sure what he was going to give up for Lent, saying he has already done things like give up red meat and chocolate.

"Maybe I'll give up like some of the favorite things I do, which is watch Netflix when I'm at home," Lieu said. "But then my family might get mad. So we'll see how that works."

Jalina Porter believes that her faith guides her in her job as communications director for Rep. Cedric Richmond (D-La.) It's a service to her country, she said, and "that alone is an act of faith."

"I have core values which stand for integrity and service and family, and I feel like we have all of that right here on the Hill," Porter said, "And as someone who does this work, the work of the people every day, I think it's acting out what ultimately God wants us to do."

Porter is a member of the Congressional Catholic Staff Association who, for a time, lived overseas in Cambodia. While there, she said she attended Catholic services conducted in Cambodia's native language of Khmer. Though she couldn't understand much of the services at first, the order of Mass was familiar to her.

"When you are ... a foreigner in a foreign land, as I was, as a woman, as an African American, as a Catholic, in a Buddhist country," Porter said, "you know what it is to kind of be isolated and alone, but you really aren't alone if you really practice your faith."

Father Patrick Conroy is the chaplain for the House of Representatives. When he met Miller, he didn't have ashes on his forehead. He bowed like he's praying, to show the ashes drawn on the crown of his head instead.

"It's supposed to be [on] the tonsure," Conroy explained. "It goes back to medieval times, I can't even see it."

His office is cloistered in the bottom of the Capitol, but it's vibrant with personality. A fish tank sits against the wall, nearly lost among all the Gonzaga University paraphernalia. On a shelf behind his desk hangs a picture of himself blessing the pope.

Conroy has spent nine years as the House chaplain. During his time at the Capitol, he's blessed Barack, Michelle and Malia Obama, and both Bill and Hillary Clinton. Conroy said he originally went to school to become a lawyer so he could become a senator. But God had different plans for him. Conroy joked that God must have remembered his bucket list and put him on Capitol Hill.

Receiving ashes, he stressed, is a devotional and not an obligation. It's an act of desire and hope — and it shouldn't just be "going through the motions."

"God's working in that moment, and oftentimes profoundly more than the person themself even realizes," Conroy said. It's these moments, he added, that remind people that "God takes our humanity seriously."

Kisha Ravi contributed to this report.