Suffrage Photos Build A Bridge From The Past To The Future

Suffrage Photos Build A Bridge From The Past To The Future 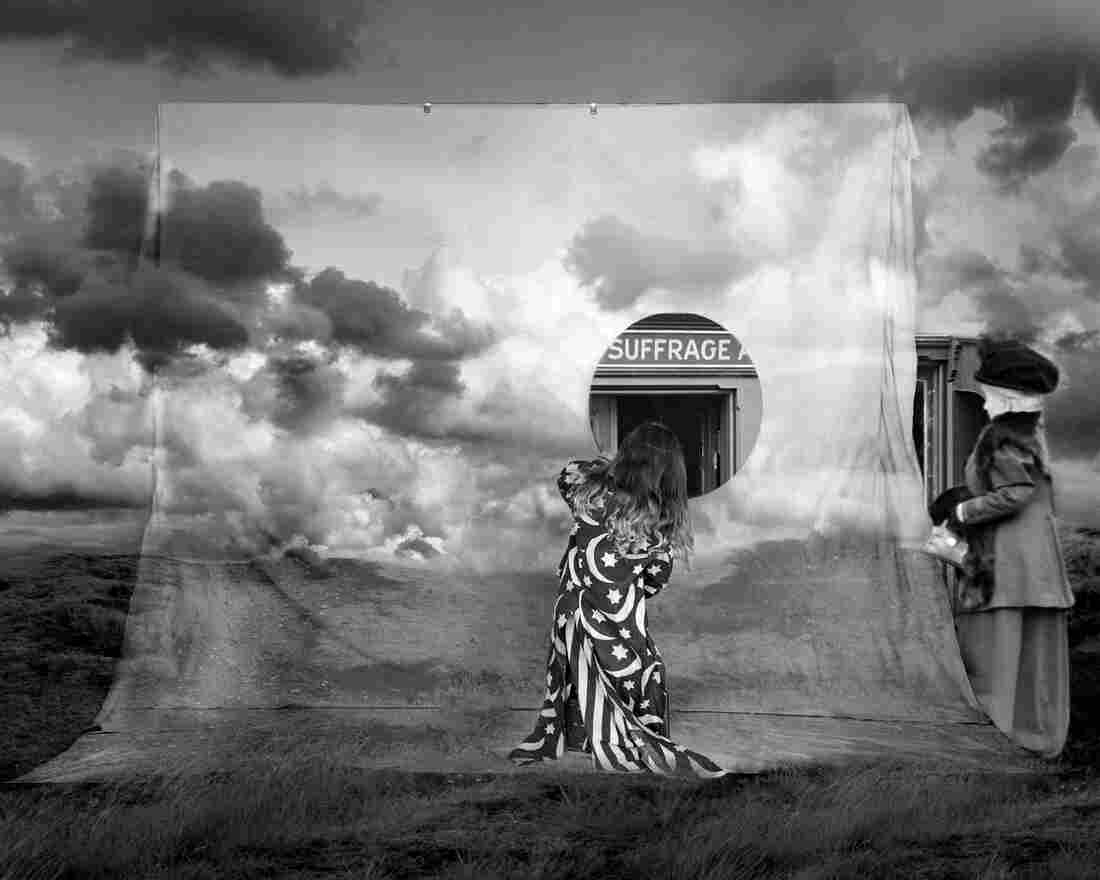 From photographer Ann George: 'This image meant a lot to me as it developed. As we peer through the backdrop of history and study the complicated legacy left on the backs of the women who fought for equality in voting rights, we can learn. We learn that change is hard. We understand that the fight for equality may have begun but did not end there.' Ann George hide caption 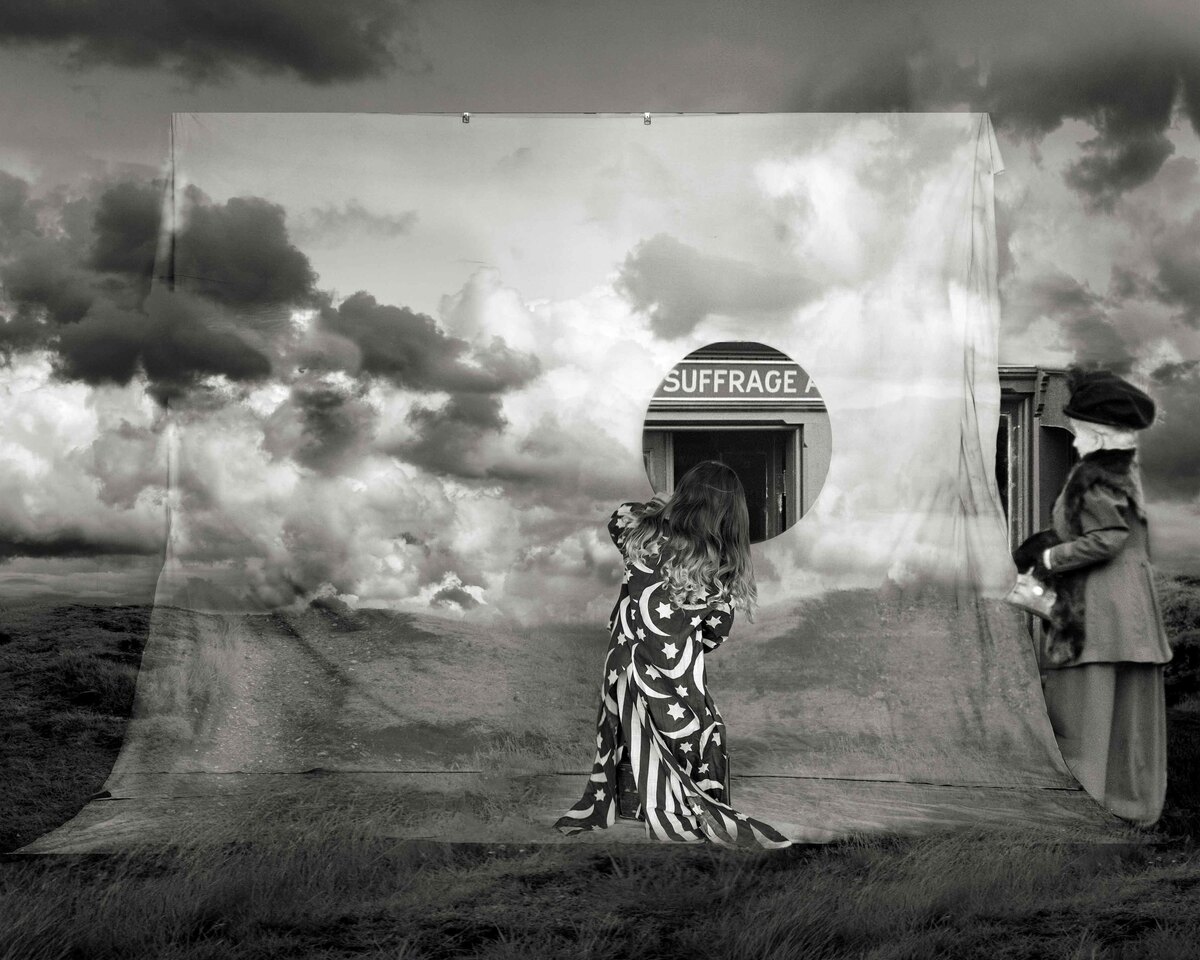 From photographer Ann George: 'This image meant a lot to me as it developed. As we peer through the backdrop of history and study the complicated legacy left on the backs of the women who fought for equality in voting rights, we can learn. We learn that change is hard. We understand that the fight for equality may have begun but did not end there.'

The day lauds the adoption of the 19th Amendment that granted women the right to vote. Aug. 18 of this year marked the 100th anniversary of the ratification of the amendment.

To mark the anniversary, photographers Meg Griffiths and Frances Jakubek brought together over 100 contemporary women photographers to reflect, respond and react to this commemoration.

In A Yellow Rose Project, each work is distinctive, but some broad themes emerged offering multiple perspectives on American history, women's lived experiences and the work still being done to move toward equality.

I have five images that are on the Yellow Rose Project site, and they are from a body of work entitled Suffer/Rage. The pieces are a collaboration with other female artists of color in which I asked them to create a protest sign with their interpretation of the word suffrage. I then photographed them with their signs and printed the images onto vintage sacks — flour, sugar and cotton field sacks. For me, the project looks at a contemporary take on suffrage.

Griffiths said the idea for the project started when she earned a tenure-track position teaching photography in 2018 at Texas Woman's University. She said the power of being around women and educators who support women really inspired her, and she knew that she wanted to do a large-scale project with women, but it was not until AIPAD — an annual gathering of photography professionals — and a dinner with Jakubek in April of 2019 that it all came together.

Griffiths and Jakubek, began inviting artists to participate in summer 2019. A scroll of the website reveals an array of visual responses to their prompt to think about the 19th Amendment.

"In order to have a rich and thoughtful response to this anniversary, which is not an anniversary for all to celebrate, we wanted to invite a diverse group of women whose perspectives would not be the same," Griffiths said.

Griffiths went on to say that she was inspired by a Sojourner Truth quote: "Women's fates were linked, but not because they were the same." 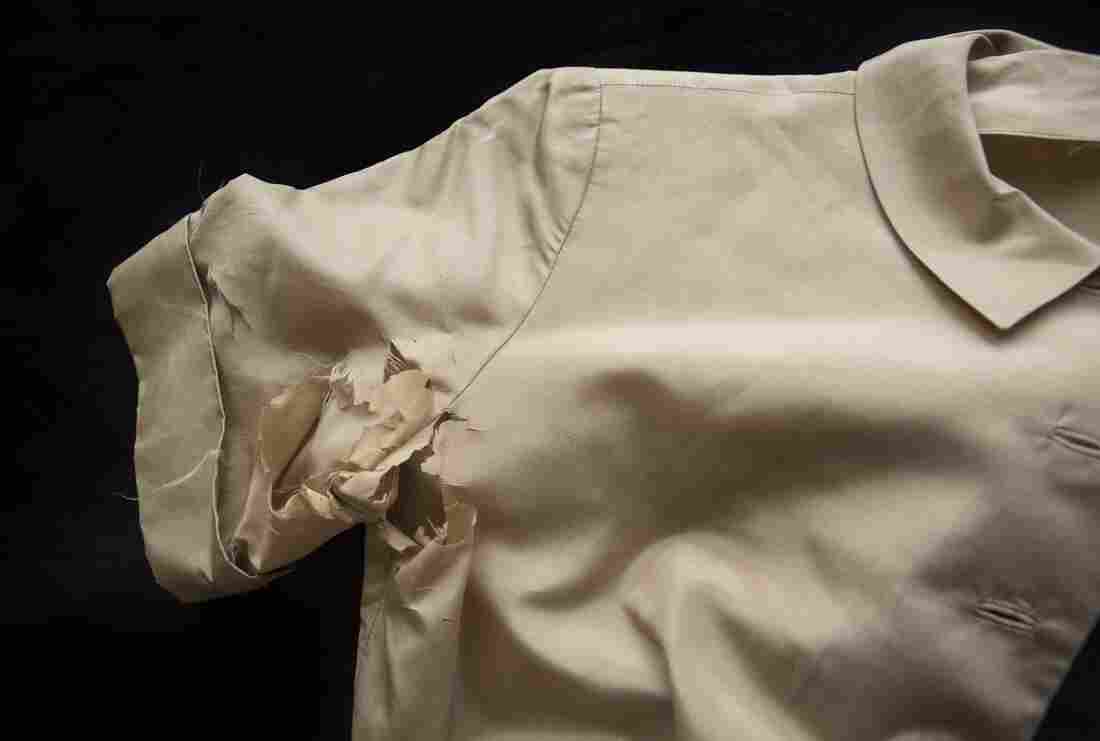 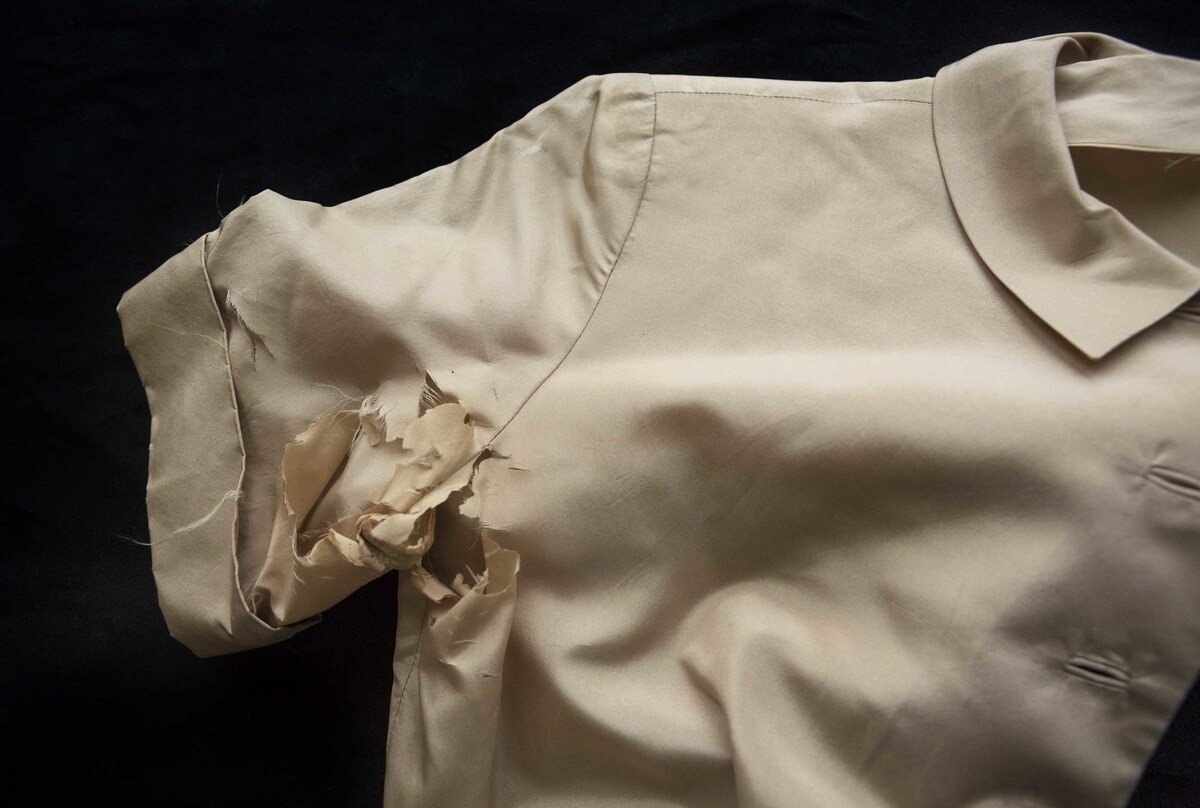 My mother and aunt worked in the garment industry in NYC, in sales and design respectively, at a time when there were few women in their positions. ... I photographed their clothing and accessories as stand-ins for the long-lasting fight by the suffragists and women of previous generations to win ratification of the 19th Amendment. The signs of wear observed on my mother's silk blouse feel symbolic of the persistence, hard work and grit of the suffragists and of all the women and men who continue to work toward attaining equality and respect for all — at work, in government and at home.

Many of the works in A Yellow Rose Project acknowledge the women who used their bodies and voices advocating for women's rights to vote. The decomposing silk fabric at the armpit of the blouse in Gail Samuelson's photograph speaks to the literal sweat of being a woman, and Tami Bahat's photographs point to the boots on the ground. 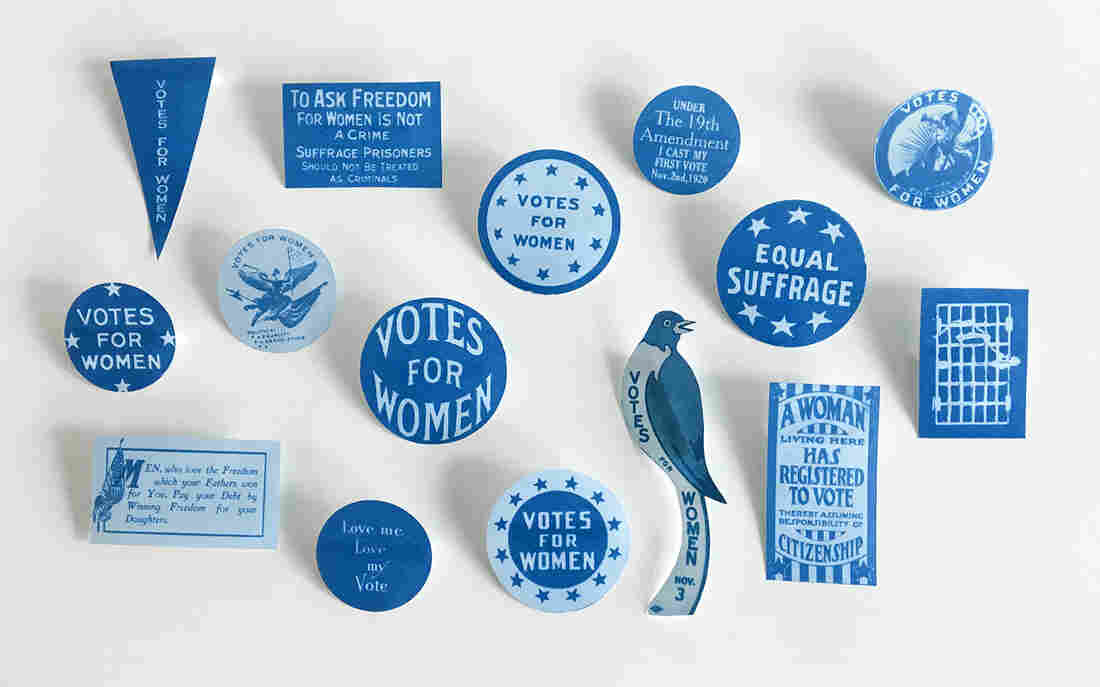 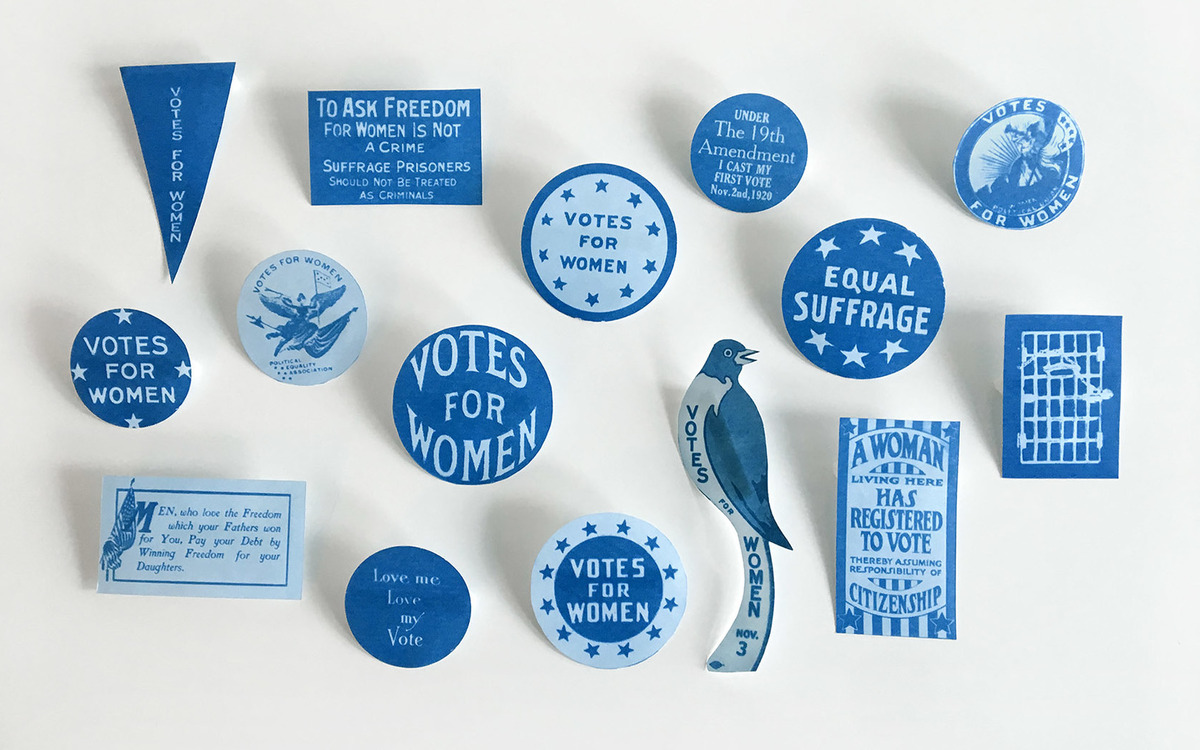 My cyanotype buttons serve the same purpose as suffrage buttons from previous generations; they serve as a continued reminder of a woman's right to a voice in government and of our collective capacity to influence election outcomes.

Tools to communicate and commune with the past (books, letters, documents and artifacts) from personal and public archives, museums and libraries are pronounced. Carol Erb's photographs of her own family and questioning whether they voted brings home the point that ratification of the 19th Amendment might not matter if the right to vote isn't exercised. Lisa McCarty made delicate cyanotype pins after the ones actually worn by suffragist. Cindy Hwang and Toni Pepe revisited press prints, while Laura Migliorino and Sandra Klein incorporated broadsides and official documents. 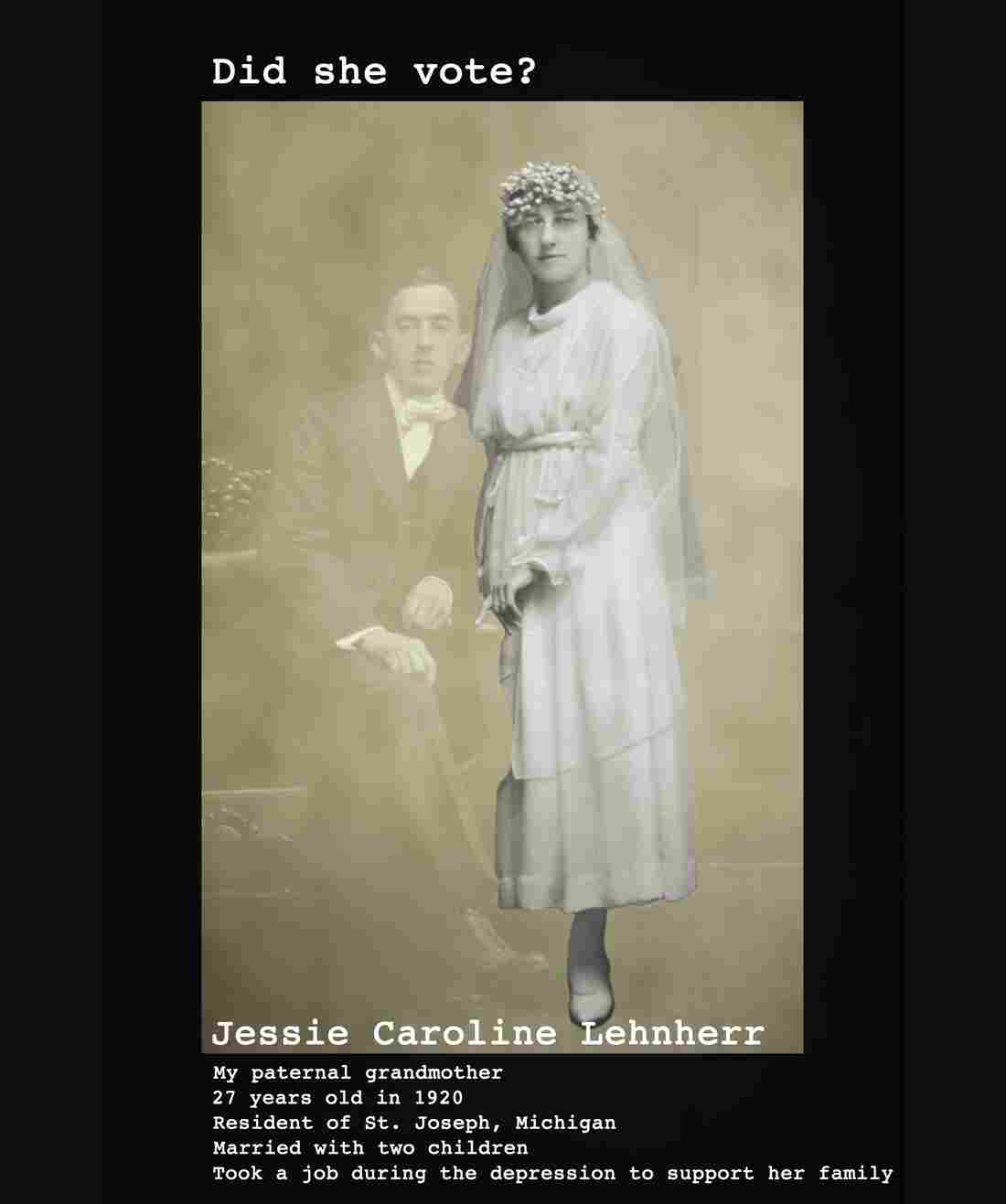 All five of my images in the exhibit are from photos of my female ancestors who would have been able to vote for the first time in 1920. These women are many years gone, so I will never know if they cast their ballots 100 years ago, but strong and assertive female personalities populate my family tree, so I would like to believe they did.

There seemed to be an eagerness to make work that was tactile, moving from images of textiles and artifacts to actually printing on fabric and incorporating real stitches. These works that break the two-dimensional rectangle of photography serve as metaphors that insist on breaking the real conventions that are preventing equality for everyone. Letitia Huckaby's photograph of a young Black girl with a shoelace untied, holding a sign with the words "Enough," is printed on a textile that resembles the long sack dragged through fields to collect cotton. Marina Font's flag and flames literally come out of the photograph. 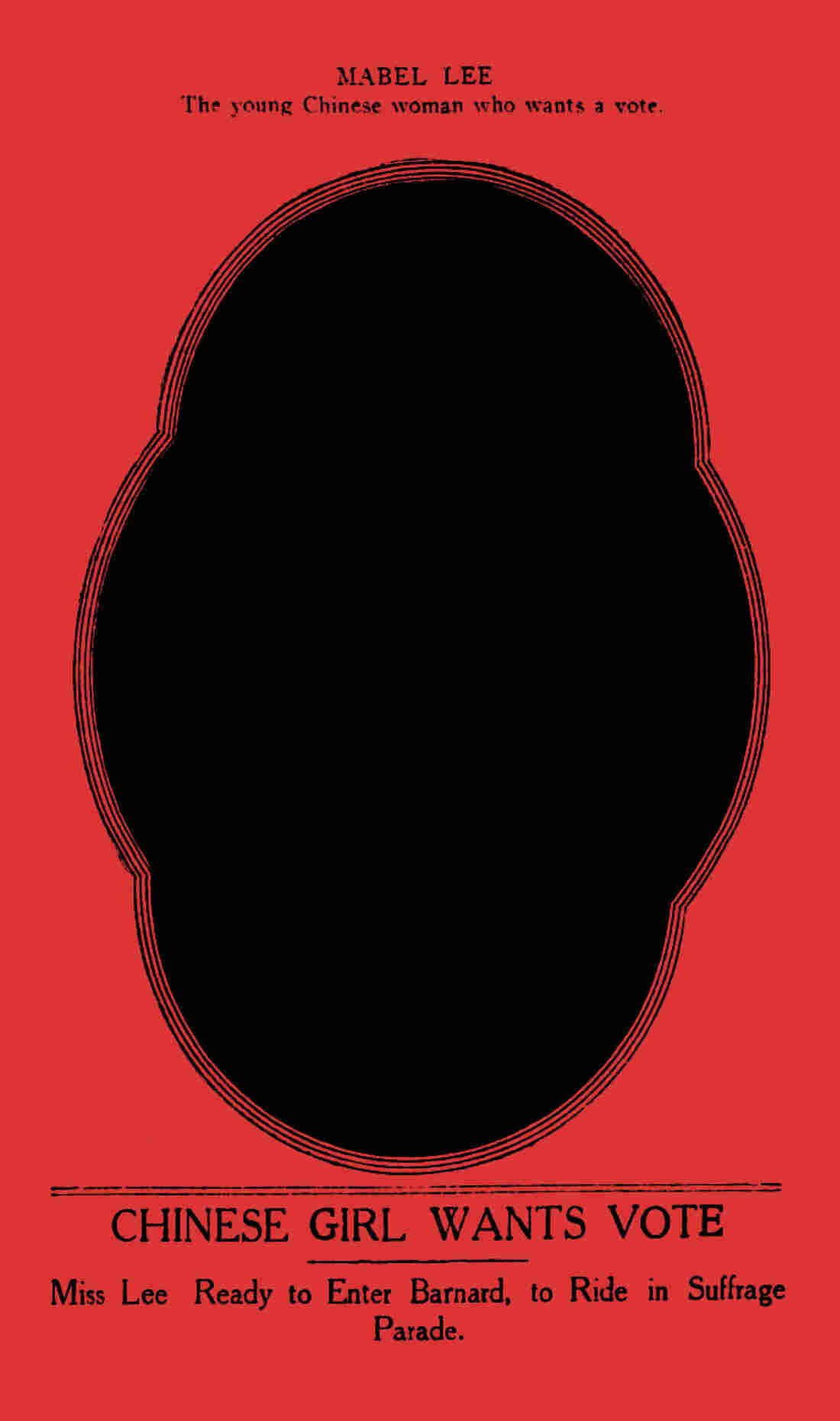 I wanted to counter dominant narratives surrounding the 19th Amendment that largely center the contributions and gains of white women. Mabel Ping-Hua Lee was a prominent suffragist who was unable to vote even after the passage of the 19th Amendment, due to the Chinese Exclusion Act of 1882, which barred Chinese immigrants from ever obtaining U.S. citizenship and was not repealed until 1943. This image resurfaces a newspaper clipping about Lee's activism but obscures her portrait — a visual indication of our collective, racially inflected forgetting. 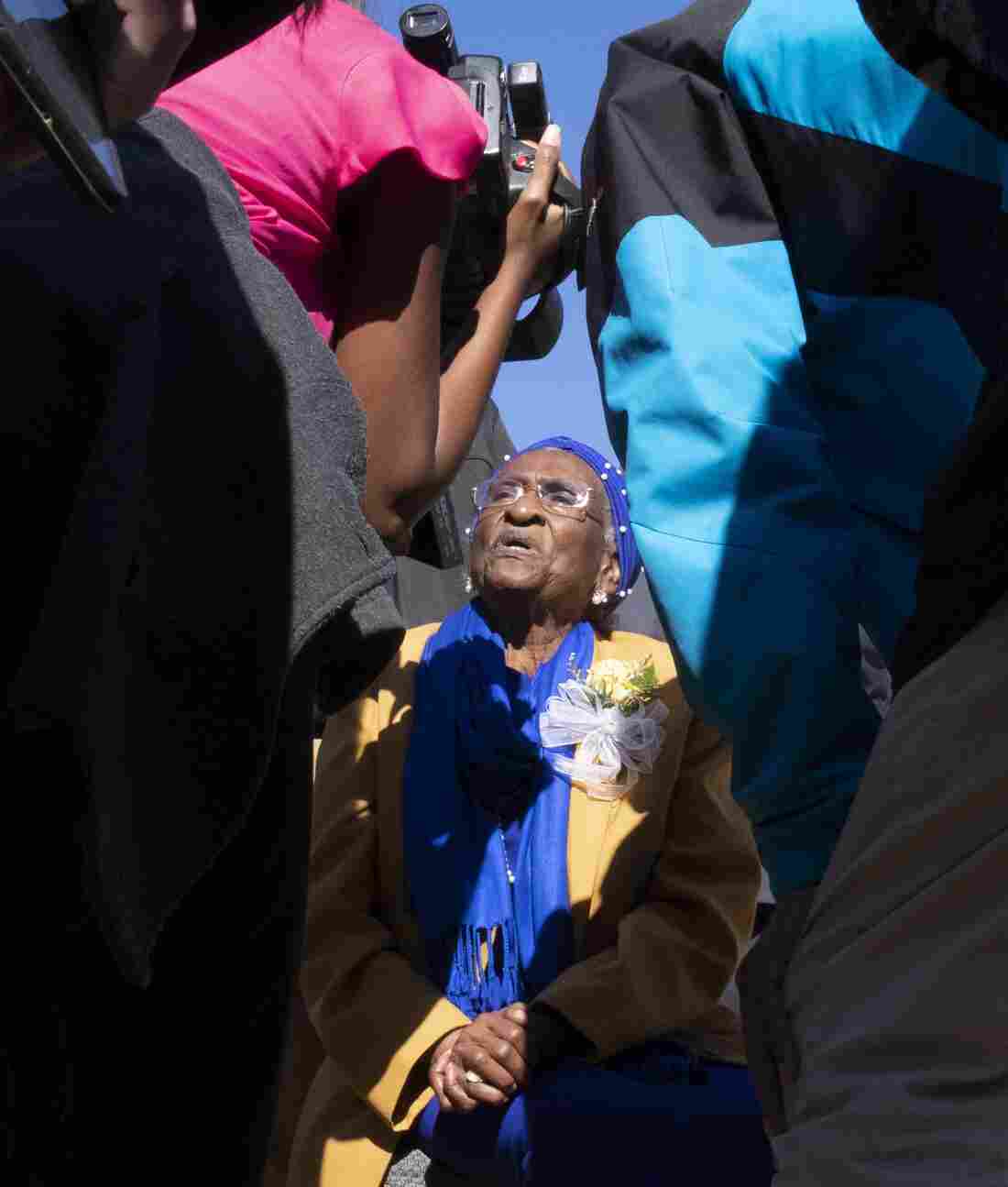 The initial dismay I felt while researching voter suppression for A Yellow Rose Project was balanced by hope as I collected stories and photographed several of the many Black women that fought for their right to vote in the 1960s. I found a common thread among these women — they did not respond to hate with hate. With courage, faith, and an enduring expectation for progress, they worked to exercise a right denied to them for decades.

For real life inspiration, the portraiture shows us actual women who are living the challenge of being American women in our voting, penal and child-rearing systems. Most potent are Carolyn McIntyre Norton's and Betty Press' portraits of Black women in Hattiesburg, Miss., who in the 1960s worked to get their community members registered to vote.

Sheri Lynn Behr's vibrating outline of Alexandria Ocasio-Cortez is underpinned by the subtle black and white photograph of Shirley Chisholm, who paved the way for the congresswoman representing New York. Yet, there are those who remain disenfranchised, like the women inside the penal system depicted by Sara Bennett. 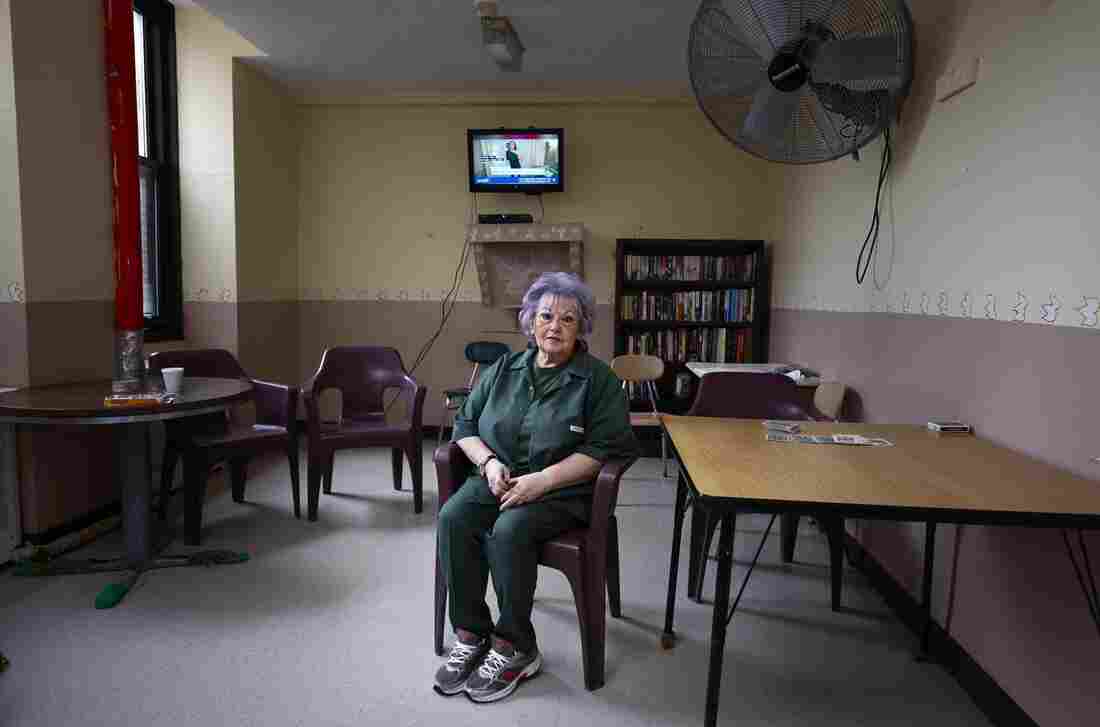 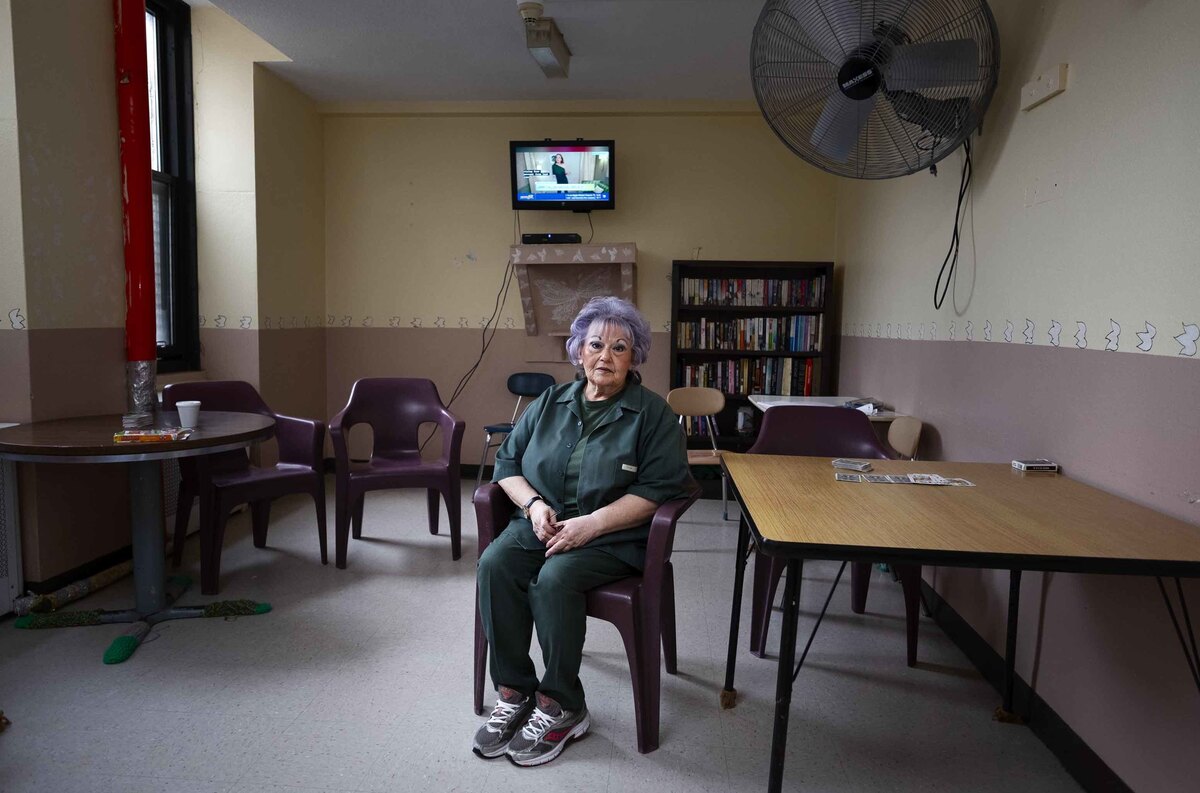 The woman in the photograph is emblematic of all people in prison who have lost their right to vote while incarcerated and, in many states, people aren't allowed to vote after having served their convictions either. On the centennial of the 19th Amendment, I wanted viewers to remember that despite all the struggles and gains, a huge portion of the population is still disenfranchised.

A Yellow Rose Project is named after the flowers worn by women at that seminal Tennessee vote in 1920.

Shannon Thomas Perich is the curator of the Photographic History Collection at the Smithsonian's National Museum of American History where she has worked for over twenty years.