Accessibility links
Should 2020 Be Forgot? Choir Rings Out Year With 'Auld Lang Syne' : The Picture Show 2020 will be over soon. But director Tyler Jones says it's important that we take time to honor and amplify the lessons learned during this year of racial reckoning.

From the pews of a church where white deacons once refused to seat African Americans, a group of Black singers in Alabama reminds us why preserving our memories of this historic year is vital — even if we'd rather just leave 2020 behind.

They're singing "Auld Lang Syne," the Scottish ballad synonymous with ringing in the new year. It begins with this line: "Should auld acquaintance be forgot / And never brought to mind?"

That question — of whether to forget the past — is central to the art film, For The Sake Of Old Times, debuting on NPR this week.

"It's certainly my tendency — and maybe our natural human tendency — to want to rush forward and put this year behind us," explains Tyler Jones, the film's director. "But that may do a disservice, I think, to our memories and those who went before us." 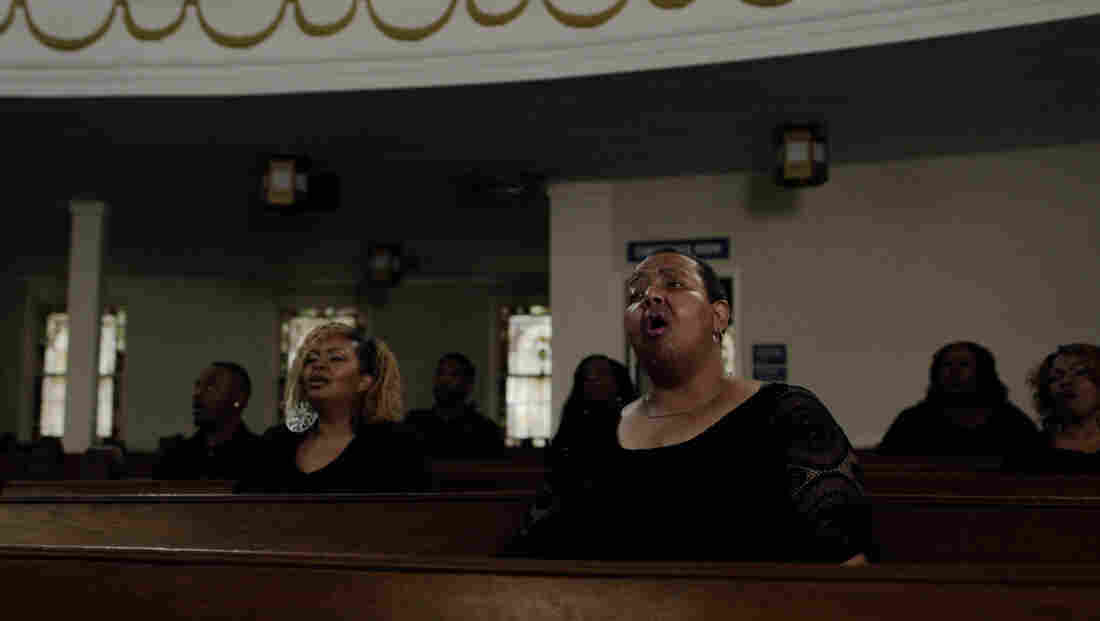 Ingrid Richardson, right, was one of many choir members. Screenshot from film hide caption 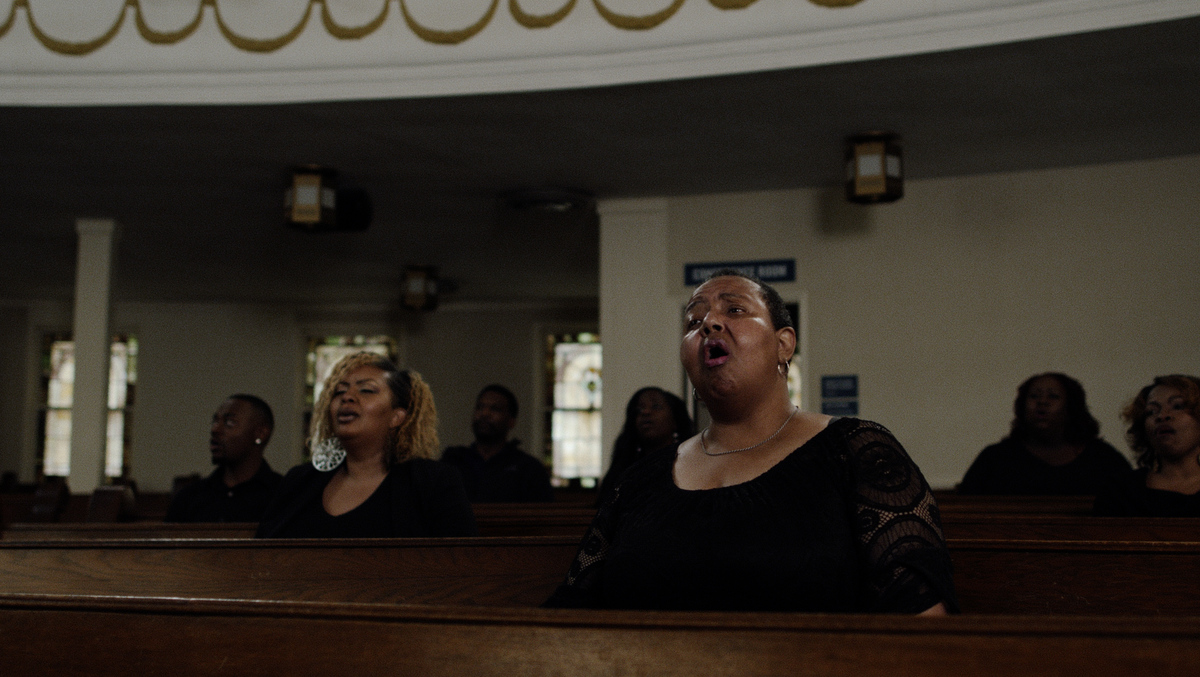 Ingrid Richardson, right, was one of many choir members.

Produced by a diverse group of filmmakers assembled by 1504, a studio based in Birmingham, Ala., For The Sake Of Old Times pairs the performance of "Auld Lang Syne" with archival footage from 2020, particularly of the summer's racial justice protests.

Among them: a vigil and protest in Chattanooga, Tenn., the removal of a statue honoring Stonewall Jackson, the Confederate general, in Richmond, Va., and the dismantling of a monument commemorating the Confederacy in Birmingham.

And like nearly everything in 2020, the pandemic cast a shadow over the project — from the production itself, which the director says received third-party certification for adhering to safety protocols, to the content and the filmmakers' approach.

"We were aware going into the project that 2020 has disproportionately impacted communities of color in ways that I will never understand," Jones says. 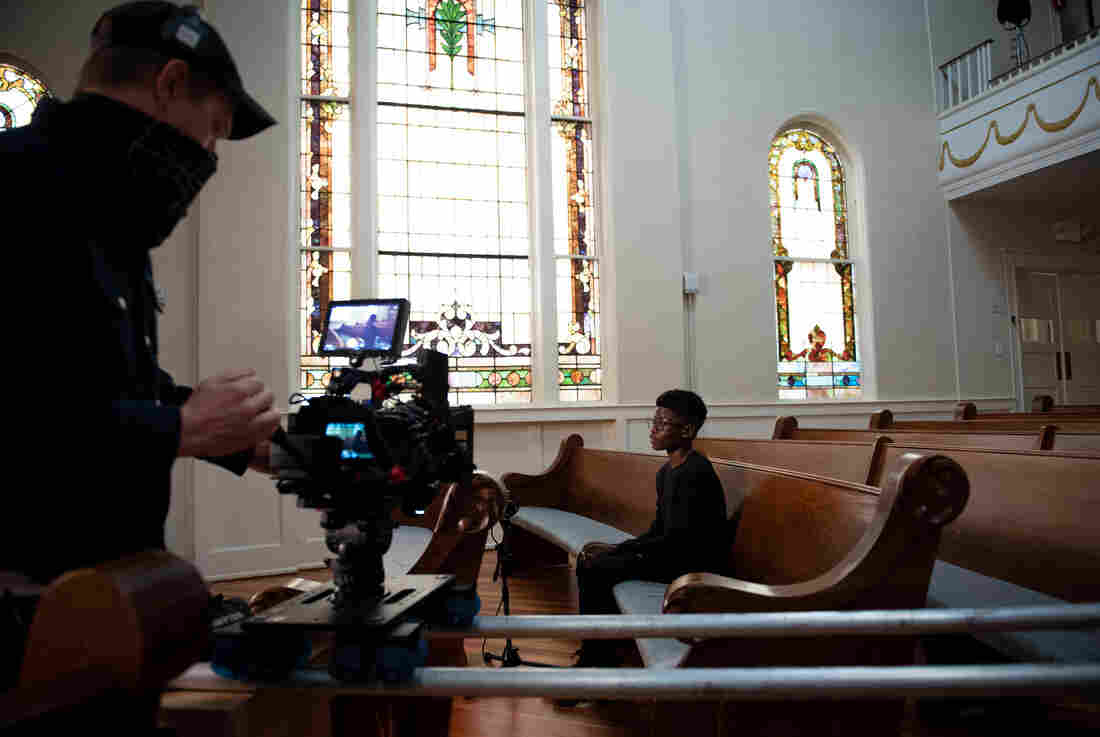 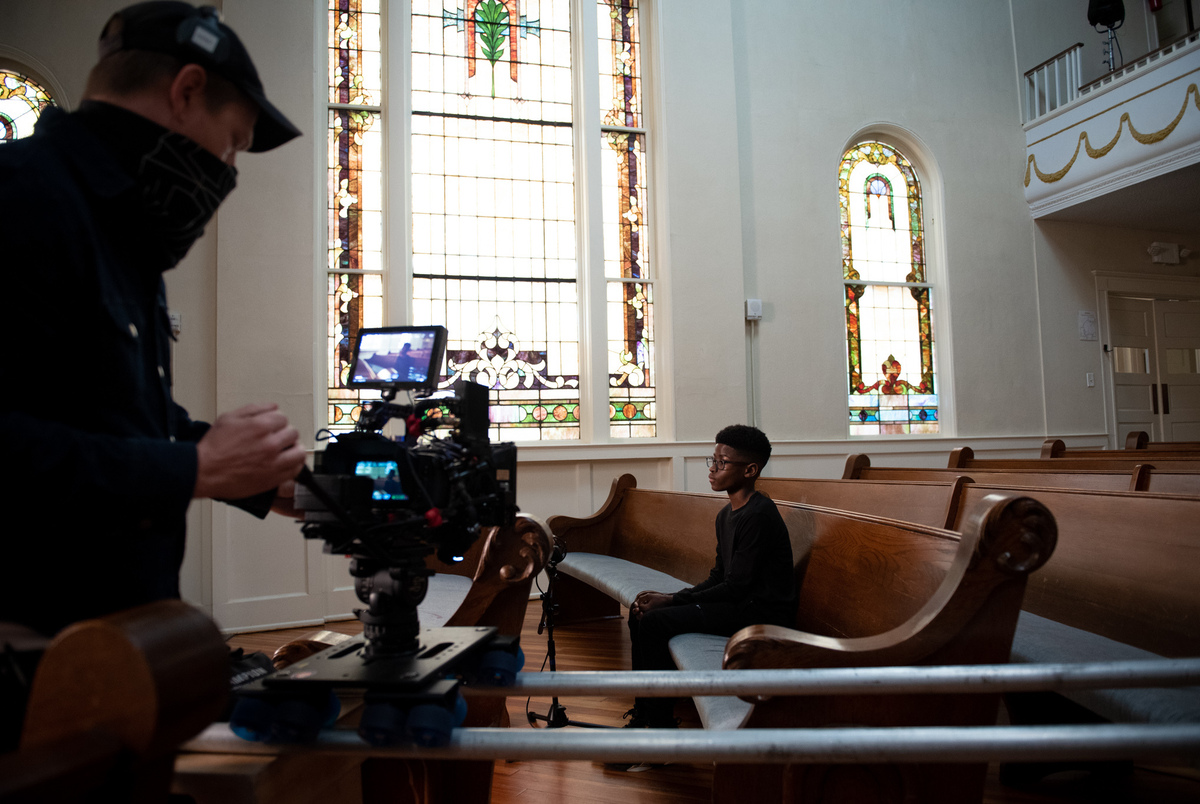 The coronavirus is infecting and killing people of color at higher rates, while the economic fallout of the pandemic is exacerbating existing wealth inequality.

"So, we wanted to also honor the racial reckoning of the year and to amplify community voices," he says.

The film also draws parallels between the events of 2020 and those that occurred during the civil rights movement.

Through his studio's collaboration with the Equal Justice Initiative — a nonprofit committed to ending mass incarceration — Jones has "learned about how Black churches played an integral part in organizing, in strategy and in healing during the civil rights movement, while ... most white churches stayed silent or took an oppositional role."

One way the film nods to that history is where it was recorded: a building that once housed a church that refused to seat Black worshippers at the height of desegregation during the 1960s. 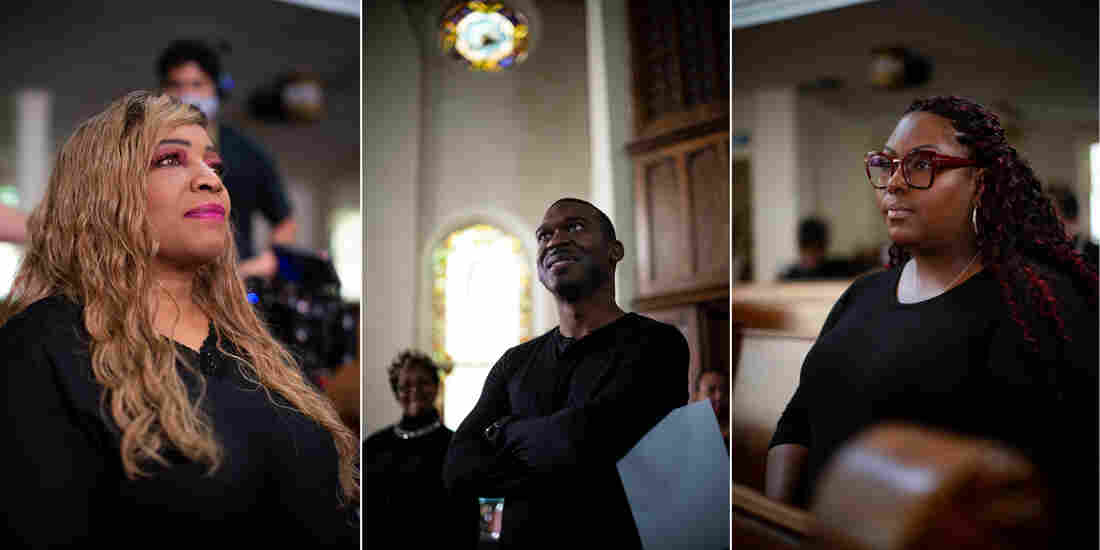 "To be together like that in a church that we couldn't even sit in. You understand what that means? That's a lot," says Carrie Davis, a singer, songwriter and music director who lives in the area.

Davis helped the studio gather community members to perform "Auld Lang Syne" and arranged the piece to reflect their voices, including her own.

While some of the film's historical tributes were intentional — like its location — others were coincidental. Such was the case with the oldest singer who performed, Eloise Ford Gaffney.

As the filmmakers and singers got to know Gaffney, they learned that she fought for voting rights for African Americans and was jailed for protesting during the civil rights movement.

Gaffney was also classmates and friends with Carole Robertson and Cynthia Wesley, two of the four African American girls killed when the Ku Klux Klan bombed the 16th Street Baptist Church in 1963.

The youngest of the victims, Denise McNair, was 11 when she died — which is, coincidentally, the same age as Jaxon Moore, the first and last person to appear in For The Sake of Old Times. 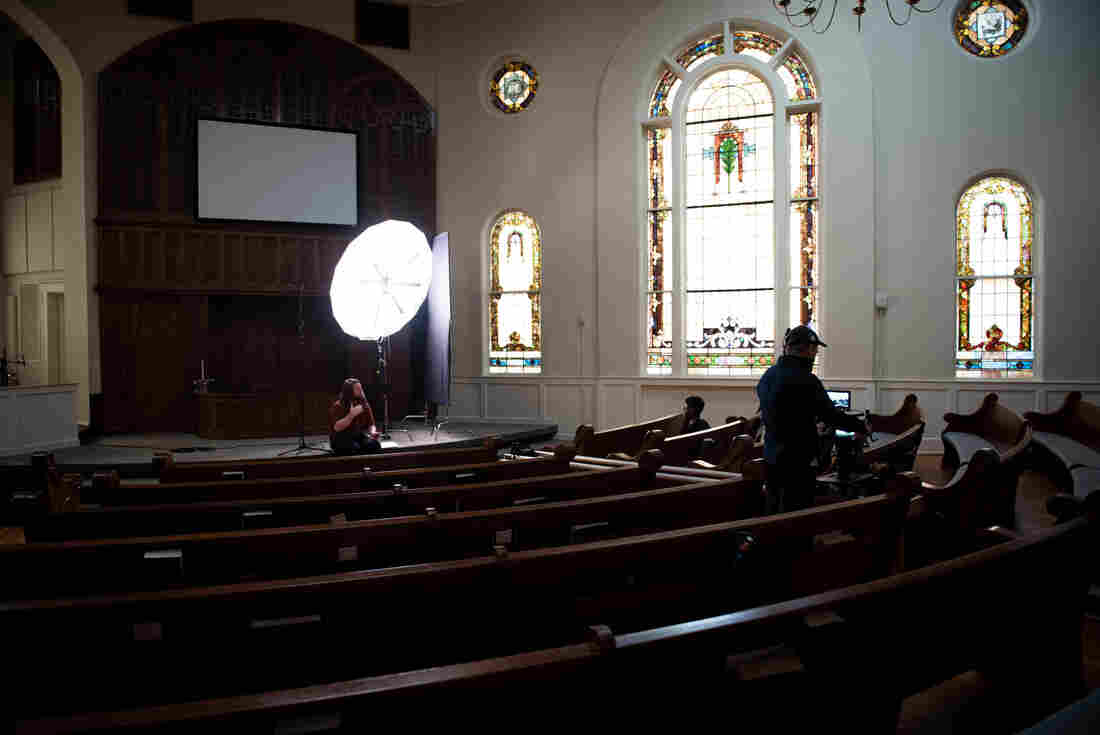 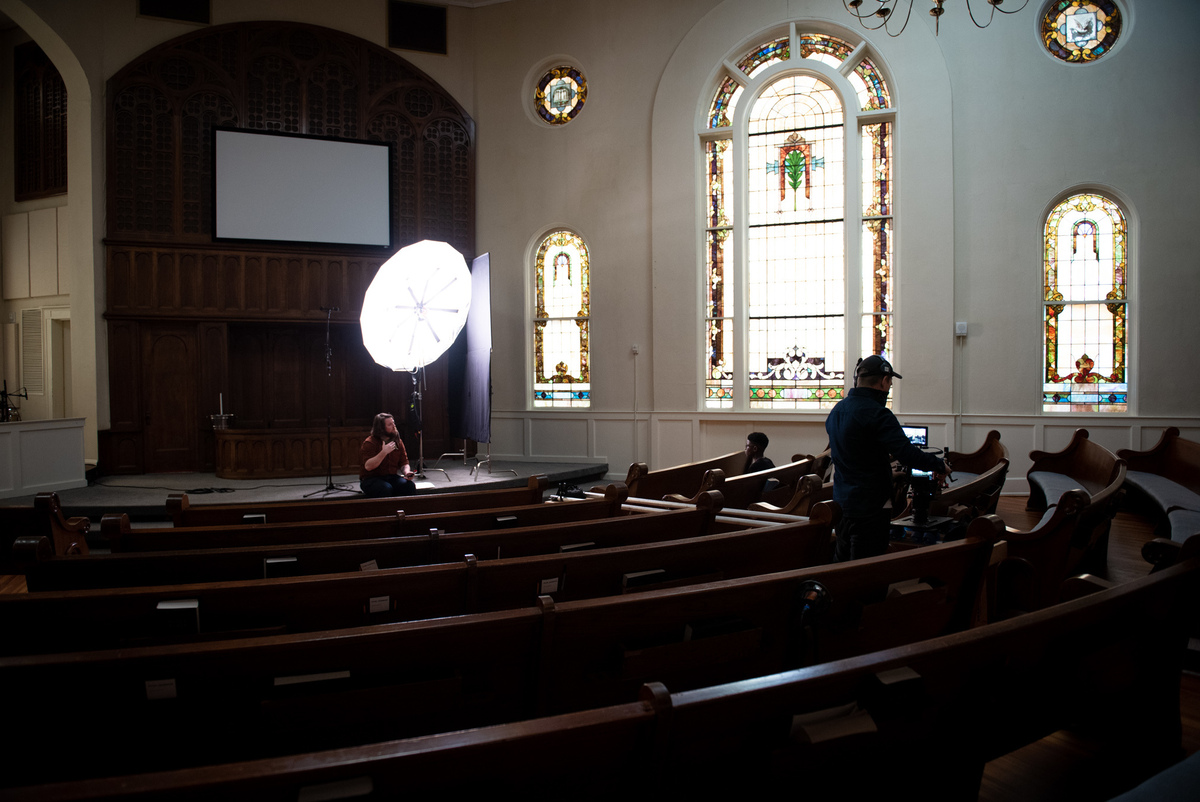 For Tyler Jones, the director, part of the film's symbolism is Moore "drawing on the community voices that are surrounding him as the song goes on."

"But at the end, he's the one that's moving forward. He's walking out of the church. And I think that it's really the younger generation that we now are having to follow," Jones says.

There's a verse in "Auld Lang Syne" that Jones says captures his wish for how the nation approaches the road ahead: "We'll take a cup o' kindness yet / For days of auld lang syne."

"My hope is that kindness sort of is the root of how we move forward," he says. "And certainly, I want the film to be an encouragement for that."

It's a hope that also resonates with Carrie Davis, the local singer and music director.