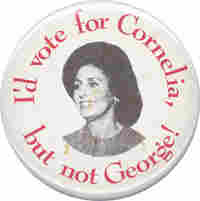 Cornelia Wallace, the second wife of Alabama Gov. George Wallace, who was with him in Laurel, Md., in 1972 during an assassination attempt -- when she threw herself on top of him after he was shot -- died yesterday. She was 69 years old and had cancer.

George Wallace's first wife, Lurleen, ran for governor in 1966 because he was constitutionally barred from succeeding himself; she won in a landslide. She died of cancer in 1968, as he was seeking the presidency on a third-party ticket. He married Cornelia, the niece of former Gov. Jim Folsom, in 1971.

During a campaign swing in Maryland in 1972 -- while he was seeking the Democratic presidential nomination -- Wallace was shot four times at a campaign rally at a Laurel shopping center by Arthur Bremer. The image of Cornelia throwing herself on top of her husband as he lay there bleeding has long been etched in the memory of those who were alive back then.

The couple divorced in 1978. That same year, she ran in the Democratic primary for governor but finished last in a field of 13 candidates.

In a 1997 TV movie about George Wallace, the part of Cornelia was played by Angelina Jolie.

The Rev. Richard John Neuhaus, once a liberal, anti-Vietnam War Lutheran minister who later became a Catholic priest and intellectual leader among religious conservatives, also died Thursday. He was 72.

Neuhaus had been one of the more prominent anti-war religious figures of the 1960s, working with the Rev. Daniel Berrigan on behalf of civil rights and against the war. As pastor of St. John the Evangelist Church in Brooklyn, he was arrested at a protest demonstration demanding integration of public schools. In 1968 he was a Eugene McCarthy delegate at the Democratic National Convention, where he was also arrested for disorderly conduct. In 1970 he lost a primary for Congress in Brooklyn to pro-war Democratic incumbent John Rooney.

He broke with the left in the 1970s, partly over the Supreme Court's decision legalizing abortion. He later converted to Catholicism and became one of the most influential thinkers in the Catholic movement. His 1984 book, The Naked Public Square, is one of the most important books on the issue of church and state.