Accessibility links
Gillibrand Choice Doesn't Satisfy All N.Y. Democrats; A Primary Fight In 2010? : It's All Politics Gov. David Paterson has selected Rep. Kirsten Gillibrand to succeed Hillary Clinton in the Senate. Not everyone is thrilled. 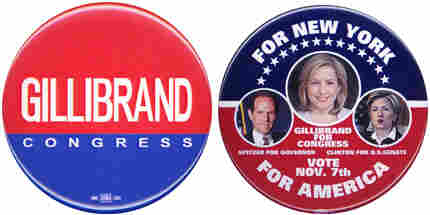 In what may have been the most rambling and unfocused announcement of a Senate appointment in U.S. history, Gov. David Paterson today named Congresswoman Kirsten Gillibrand (JILL-a-brand) from upstate New York to fill Hillary Clinton's seat. The announcement came just one day after Caroline Kennedy withdrew her name from consideration, a spectacular retreat after having spent six weeks trying to make her case she should have the appointment.

The choice of Gillibrand, which was our prediction the moment Clinton was picked for the Obama Cabinet, made sense in many ways: She is photogenic, able to raise huge sums of money (which she will need to run statewide in both 2010 and 2012), and hails from outside New York City -- unlike other Democrats who will be running next year, such as Paterson, Sen. Chuck Schumer and state Attorney General Andrew Cuomo (himself someone who was angling for the Senate appointment).

But there are problems ahead. To win in a longtime Republican district -- she knocked off a scandal-ridden GOP incumbent in 2006 -- Gillibrand has broken from her party on several matters. She voted against the financial bailout bill in the fall. And she received an "A" rating from the National Rifle Association, which enthusiastically endorsed her bid for re-election last year. This is what Gillibrand said in response to the endorsement, as per the Albany Times Union's "Capitol Confidential" blog:

As a strong supporter of the Second Amendment, it is a privilege to have the endorsement of the NRA and the support of Upstate New York's gun owners and hunters. I come from a family of hunters, and preserving this strong Upstate tradition is a priority of mine in Congress. I will continue to oppose legislation that will restrict the rights of responsible gun owners and I will continue to advocate for policies that will keep our rivers, land and air clean, so that future generations can enjoy hunting and wildlife in our region.

And that's what got Rep. Carolyn McCarthy up in arms, no pun intended. McCarthy was a Long Island housewife when, in December 1993, her husband was murdered and her son seriously wounded by a deranged gunman on the Long Island Rail Road. Three years later, her congressman, Republican Dan Frisa, voted to eliminate a ban on semiautomatic weapons. An enraged Carolyn McCarthy talked to local GOP officials about challenging Frisa in the primary. When they refused to listen to her plea, she quit the Republican Party, became a Democrat and ran against Frisa, beating him by 17 points.

When word got out yesterday that Gillibrand was going to be the choice, McCarthy was livid and suggested she would challenge her in the 2010 primary. McCarthy did not back down today, after Paterson made the appointment.

New York Daily News' Kenneth Lovett quotes Gloria Cruz of the Million Mom March to Prevent Gun Violence as saying, "When I heard Gillibrand was his pick, I thought it was a joke. This is an insult to the families of gun violence victims across the state. Shame on Gov. Paterson." Lovett adds that Manhattan Borough President Scott Stringer is also considering mounting a primary challenge to Gillibrand.

The most interesting stuff I've seen today came from Michael Tomasky in his Politics and Other Stuff blog:

1. She's an odd choice. Two years in Congress, against all those members of the state's House of Representatives Democratic delegation with many years experience? In these cases, one smell test that ought to be passed is that a governor should be able to say "X was the best person for the job" with at least some degree of plausibility. I don't think Paterson can do that here. Even Blago could say that about Roland Burris, kinda-sorta. She was an obviously political choice: woman and upstater. Those are fair considerations of course, but when it's this obvious, it invites trouble.

2. Paterson has just made himself lots of enemies. I mean lots. Gillibrand will certainly face a primary challenge in 2010 -- one congresswoman, Carolyn McCarthy, has already vowed to. And others will see her as potentially beatable. Since so much of the statewide Democratic vote is from the city and the immediate suburbs -- and, crucially, so much of the donor base is too -- a city-based Democrat could look awfully formidable against her on paper.

3. This will be so controversial in intra-Democratic circles that Paterson may even have invited a primary challenge against himself in 2010. Today's New York Post suggests as much:

Believe me, you don't want to pick a political fight with the Cuomos. They throw elbows.

I don't much care about her National Rifle Association bona fides. Any Democrat from a rural district has to be pro-NRA. Even many New York City Democrats will, over time, come to understand that. That isn't the problem. And it should be said that Gillibrand has done some impressive things -- she beat a well-entrenched GOP incumbent when she first won the seat, a hard thing to do in upstate New York (I know the district well, having owned a house there for a few years).

The problem is that Paterson passed over lots of people who are more experienced. They will be pissed (not drunk; livid). He will gain countervailing support among upstaters and moderates for bucking the big-city liberal establishment. But when it comes to Democratic primaries in the state of New York, trust me: the smarter money is placed on the big-city liberal establishment.

Only once in the history of New York Democratic Senate primaries has the nomination gone to someone outside New York City, and that person, Rep. Richard Ottinger, was only barely outside the city; he represented Westchester. Below is a chart of classic N.Y. Dem Senate primaries; candidates outside NYC are in bold: