Say Hello To Pat Quinn, The New Governor Of Illinois

Say Hello To Pat Quinn, The New Governor Of Illinois 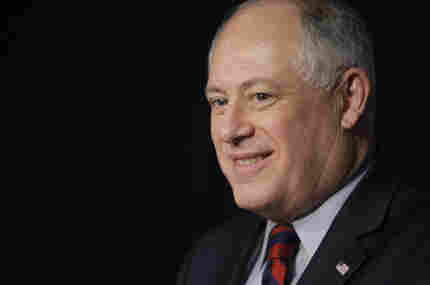 Then-Illinois Lt. Gov. Pat Quinn talks to the media at a Jan. 23 news conference in Chicago. Quinn discussed what he would do if he were to become governor. M. Spencer Green/AP hide caption

Despite his long career in politics, he was never seen as a powerhouse. He was more of a "goo-goo" -- one of those "good government" liberal populist reformers. He was dismissed as a gadfly, an odd-duck publicity-seeker, not especially known as a team player. Certainly not a go-along-to-get-along type of guy. He made his share of political enemies, many from his own Democratic Party.

But he is Pat Quinn, and Pat Quinn is now Illinois Gov. Pat Quinn. His ascension became official today when the state Senate, by a unanimous 59-0 vote, officially ended the governorship of Rod Blagojevich.

If Blagojevich was vain and over the top, Quinn, 60 years old, is a mostly humor-challenged pol. He is an outsider who spent many years, and many elections, trying to make it on the inside. He champions the little guy, the powerless, with his longtime support for citizen initiatives, and he has spent a career battling special interests.

But he is not the most popular pol in Springfield either. His successful effort to cut the size of the state Legislature left him with some bitter enemies. And now he has become the most powerful person in Illinois state government.

Campaign record. In 1986, he sought the Democratic nomination for Illinois state treasurer but finished third in the primary to Jerry Cosentino. In 1990, with Cosentino running for secretary of state, Quinn was elected treasurer (with, by the way, the help of strategist David Axelrod).

Four years later he took the same route as his predecessor Cosentino: He ran for secretary of state. But he lost to Republican George Ryan, later the governor and later convicted of corruption. In 1996, Sen. Paul Simon (D) retired, and Quinn jumped into the primary to succeed him. But he got clobbered by a downstate congressman, Dick Durbin, now the Senate majority whip. In 1998 he lost a bid to become lieutenant governor.

But four years later, in 2002, he tried again, and he won the Democratic primary for LG and found himself on the same ticket as the party's gubernatorial candidate, Congressman Rod Blagojevich. Had it been an ordinary year, Quinn could have once again gone down to defeat. But by 2002, the Republlicans in Illinois were reeling, the governor under a corruption investigation that would eventually send him to prison. The Blagojevich-Quinn ticket won, and despite the hints of the governor's ethics woes throughout much of his first term, they were re-elected in 2006.

But by his own admission, he hasn't been close to the governor. At the time of Blagojevich's arrest on Dec. 9, Quinn said the two hadn't spoken in a year. He certainly didn't hesitate to talk about him, though, saying that the governor should resign his office.

He wouldn't. The Illinois state Senate decided the issue by convicting him today. And now Pat Quinn, gadfly outsider, is governor.

One of the interesting aftermaths of all this is the looming presence of 2010. Lisa Madigan, the state attorney general and a longtime Blago foe, had been preparing to run for governor next year, taking on Blagojevich in the primary if she had to. Now, with Quinn as governor, that dynamic has changed. Stay tuned.