Accessibility links
Who Will Lead The Republican Party? : It's All Politics The Republican National Committee will elect its party chairman today. Will it be Mike Duncan, who has led the GOP since 2007? Or will one of his four challengers triumph?

Who Will Lead The Republican Party?

Who Will Lead The Republican Party? 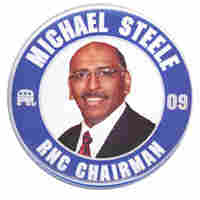 Michael Steele is one of two African-Americans hoping to head up the RNC. hide caption

Ordinarily I would concede that it's hard to even get political junkies excited about the election of a new national party chairman. This is inside baseball to the extreme.

But when you're the Republican Party, and you have no obvious front-runner to recapture the presidency, and that new guy in the White House who beat you is extremely popular, and your leader in the House is the same guy who watched the Democrats net 50 seats the past two cycles, and your leader in the Senate is more of a tactician than a charismatic national figure, maybe the person elected to head up the GOP is someone worth watching.

If we're not exactly sure what message the party is trying to deliver in the wake of its defeat last November, there is one thing we are sure of: Republicans want to move in a new direction. And that's why my gut tells me that Mike Duncan, who headed up the party since 2007 as the personal choice of President Bush, is not going to get re-elected. That's not to say that Duncan isn't a good guy; he's just Bush's guy. And with Bush's policies being repudiated by voters in both 2006 and 2008, keeping Duncan just doesn't make sense.

(Was Duncan a good fundraiser? Yes. Was it his fault that John McCain had trouble connecting with grass-roots conservatives? No. And shouldn't he get credit for the post-Nov. 4 Republican victories in the Georgia Senate race and picking up the House seat of Bill Jefferson in Louisiana? Sure, why not? Let's give him that. But with the "change" mantra working so well for the Dems, I would think that a party that so desperately needs a new course would look elsewhere.)

Four candidates are vying to replace him. Two of them are African-American: Michael Steele, the former lieutenant governor of Maryland and a regular commentator on the Fox News Channel, and Kenneth Blackwell, Ohio's former secretary of state and the GOP nominee for governor in 2006. The other two are white state party chairmen: Saul Anuzis of Michigan and Katon Dawson of South Carolina.

Another candidate, Chip Saltsman, dropped out of the contest yesterday. Saltsman, a former party chair from Tennessee who ran Mike Huckabee's presidential campaign last year, got some unwanted attention at Christmas when he mailed out a holiday CD to RNC members that included a song called "Barack the Magic Negro." He called it "light-hearted" satire; others called it poor taste. As it was, Saltsman's candidacy suffered because of it, and he never was a factor in the race.

To win, a candidate needs 50 percent plus one of the 168 members of the Republican National Committee who will be eligible to vote -- thus, 85 members. Duncan may indeed have the most committed votes at this stage, but I suspect that as the last place finishers drop out after each round, RNC members will coalesce around someone else. My guess is that it's Dawson.

It's not that the South Carolinian doesn't have his own problems. Until last fall, he was a member of an all-white country club, a curious message to send if the party is looking to increase its support among black and Latino voters.

But the other candidates have their own vulnerabilities as well. Anuzis has been feuding with other Michigan Republicans, who argue that under his watch the party has lost too many Senate, gubernatorial and congressional races. Steele is accused by many of being too moderate; Blackwell of being too far to the right.

The other ghost in the room, other than that of George W. Bush, is Howard Dean. Dean, the recently departed chairman of the Democratic National Committee, pushed a "50-state strategy" when he took over the DNC in 2005. And whether you agree or not with the assessment that he did a good job -- I think he did -- he brought new technology and new troops to states that had long gone without any Democratic Party presence. The next Republican chairman can only hope to duplicate Dean's success.