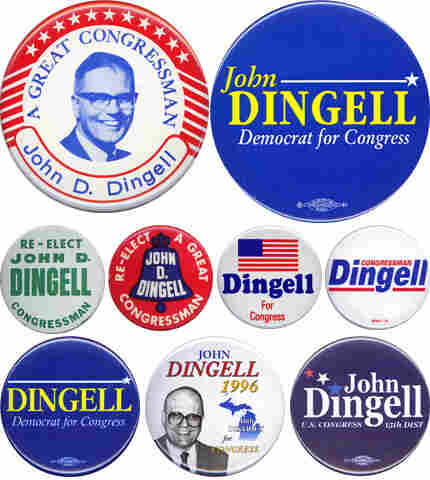 This blog sometimes gets criticized for spending as much time in the past as we do the present, and for that we plead guilty. Or, better put, we try to put today's events in perspective by reminding folks about what came before. Just this week, for example, we reported on Rep. Artur Davis' bid to be the next governor of Alabama by listing every African-American gubernatorial nominee since Reconstruction.

And we especially plead guilty today.

John Dingell, a Michigan Democrat first elected in a 1955 special election, today becomes the longest-serving member in the 220-year history of the House of Representatives. After 19,420 days, Dingell breaks the record held by the late Jamie Whitten, a Mississippi Democrat who served from 1941 before deciding not to seek re-election in 1994.

(Third place is Carl Vinson, a Georgia Democrat, who served 50 years and two months, from 1914 to 1965. In the current Congress, the member with the second-most seniority is Michigan's John Conyers, who was first elected in 1964.)

Dingell is best known for his tireless championing of the Detroit auto industry. For that he has been criticized by environmentalists, even though his career is filled with major conservation victories, such as the Clean Air Act, the Clean Water Act and the Endangered Species Act. But his resistance to new fuel-economy standards in automobiles was partly behind his being dumped as chairman of the Energy and Commerce Committee last year in the Democratic caucus by California's Henry Waxman (with the behind-the-scenes help of Speaker Nancy Pelosi).

His father, John D. Dingell Sr., was elected to Congress in 1932 and became a champion of the New Deal. The younger Dingell served as a congressional page and was in the chamber when President Franklin D. Roosevelt gave his "Day of Infamy" speech after which Congress then voted to declare war on Japan.

His father died in office unexpectedly on Sept. 19, 1955. John Jr., then 29 years old, won a special election in December and has served ever since. He has had but two electoral scares in his career, both in Democratic primaries. In 1964, redistricting merged his district with that of Rep. John Lesinski Jr. Both men were Democrats, but they split on the Civil Rights Act that passed that year -- Dingell voted for it, Lesinski against it. The primary was billed as a referendum on civil rights and a possible indicator of a "white backlash." Dingell won with 55 percent of the vote.

The other scare came in 2002, when reapportionment cost Michigan another House seat. Dingell was thrown into the same district as Rep. Lynn Rivers. In the primary, she won the support of feminists and liberals (and money from Pelosi); he had the backing of the NRA and the auto industry. And he won a larger-than-expected, 59 percent victory.

He has been slowed lately by knee surgery and a bad back, but he remains as sharp as ever. Once widely described as a bully, he has morphed into a revered figure in Congress. At a ceremony in Statuary Hall at the Capitol last night honoring Dingell, former President Bill Clinton said, "We are not here for the length of his service. We are here for the quality of his service."

In addition to all the honors he will receive today, Congressman Dingell will also be our special guest during the Political Junkie segment on NPR's Talk of the Nation, which starts at 2 p.m. ET.

It doesn't get better than that.