Accessibility links
Newt Always Seems Happier In The Opposition : It's All Politics Some reflections on the ups, downs and possible ups again of Newt Gingrich. 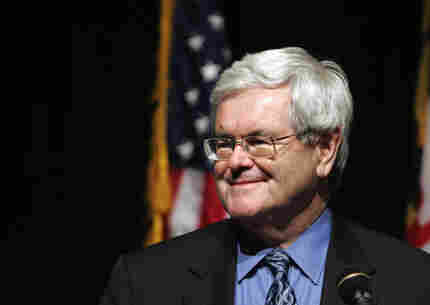 I've watched Newt Gingrich for quite a long time now. I've seen him up close when he was the noisy backbencher in the House (where he helped bring down a Democratic speaker), when he moved into the GOP congressional leadership, when he became speaker. When he overreached and was forced out.

And today, at CPAC -- the Conservative Political Action Conference -- in Washington, where he gave the noontime speech to a capacity crowd.

I'll admit I had a closer view of him in his earlier days; that period coincided with my stint covering the House for ABC News. Back then, in the late '80s, many reporters made the mistake of limiting their contacts on the Hill to Democrats; I suspect that's one reason why so many were blindsided when the Republicans took control in 1994.

But Gingrich was someone you wanted to seek out. He in turn was anxious and willing to share his philosophy, his strategy, his plans. He always envisioned Republicans one day winning a majority of seats in Congress (at which I usually rolled my eyes). But he seemed to enjoy the intellectual give and take, and I would often come away with a better understanding of the guy.

Two things also stay with me from those days, back when Speaker Jim Wright was forced out and Gingrich was rewarded by becoming minority whip (by the slimmest of margins). One was how moderate and even liberal Republicans in the House (they used to have them back then) really wanted Gingrich to speak for them. They were weary of spending decades in the minority, and some didn't like what they saw as GOP leader Bob Michel's willingness to settle for crumbs thrown at him by the Democratic majority.

The other was how some higher-up Republican leaders would talk about him behind his back when he succeeded Dick Cheney as whip. When he was a congressional newbie throwing bombs, they were all for him. But when he became the No. 2 Republican in the House, the backstabbing started. I never forgot that, and I thought of it today.

After Bill Clinton was elected president, and especially after the GOP captured the Congress two years later, Gingrich became, for better or worse, the public face of the Republican Party. Initially, he appeared to be on a roll. Much of his Contract With America became law. But somewhere, he went from visionary to political albatross. There was his personal pique during the government shutdown of 1995, which basically turned the tide of public opinion away from the GOP and toward President Clinton, who, at one point, had publicly wondered if Gingrich was still relevant. I am one of those who firmly believe that Gingrich was as responsible for Clinton's winning re-election in '96 as anyone else.

Gingrich also had his own share of ethics problems. He became brash, and arrogant. His personal life -- carrying on an affair while criticizing Clinton's moral lapses, for example -- also became an issue. And when the Republican Party lost seats in the 1998 election (an election Gingrich painted as a referendum on the six years of the Clinton presidency), he was gone. Resigned as speaker, as congressman.

I thought of all that, and more, as I watched his CPAC speech today at the Omni Shoreham hotel in Washington. He was the Gingrich of old, feisty, interesting, aggressive, but mindful of not going overboard.

Gingrich always seemed happiest, to me, when he was on the outside, when Democrats or liberals were in charge. Ever since he was first elected to Congress in 1978, Democrats have never been in charge the way they are now. That could explain his seemingly good mood today.