Accessibility links
Who's On The Senate 'Short List'? : It's All Politics Roland Burris has served less than two months in the Senate. While people are speculating how much longer he will serve, some readers are wondering about those whose Senate tenure was especially brief. 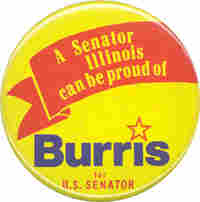 Burris first ran for senator in 1984. His slogan back then does have some irony today. hide caption

Roland Burris, in the Senate all of 35 days (as of this writing), is under pressure to resign (see yesterday's post on the subject). And that has led to a bunch of questions from The Reader. Jerry Stephens of Oklahoma City sends in this one:

Would you comment on the brevity of some U.S. senatorial careers? It seems Sen. Burris may be on the way out. That would be, what, about five or six weeks. Would that be the shortest senatorial tenure in our political history?

Similarly, this question from Carl Malmstrom of Chicago:

With the possible demise of my state's junior senator after less than five weeks in office, I find myself wondering: What is the record for shortest-serving senator in U.S. history? By this, I ask what senator served the least amount of time after being sworn in? In other words, I'm not counting those, like Mel Carnahan, who won their elections posthumously. I also don't care whether he or she was elected or appointed and whether or not he or she ever cast a vote, just the shortest turnaround from (initial) swearing-in to leaving or being removed from office. My father is tremendously curious to know the answer to this as well.

As for Jerry's question, there have been many brief Senate careers in recent years. They arrived mostly by appointment following a vacancy, and for the most part did not run again when their term was up. Here's a list of some whose tenure was less than a year:

-- Nicholas Brady (R-NJ). Brady was appointed in April of 1982 following the resignation of Sen. Harrison Williams, a Democrat who was convicted in the Abscam affair. Brady served 8 1/2 months but didn't run for the job when his term expired later that year. In 1988 he was named Treasury secretary by President Reagan.

-- Sheila Frahm (R-KS). Frahm was appointed to fill the seat of Bob Dole, who decided it would help his presidential campaign to resign from the Senate. Frahm, appointed in June 1996, was defeated two months later in the GOP primary by Rep. Sam Brownback. Her term lasted 5 1/2 months.

-- Jocelyn Burdick (D-ND). Burdick was appointed to replace her husband, Sen. Quentin Burdick, who died in 1992. She served less than three months and never ran for office.

-- Dean Barkley (I-MN). Barkley, a longtime member of Minnesota's Reform Party, was appointed by Gov. Jesse Ventura (I) following the death of Sen. Paul Wellstone (D) shortly before the 2002 elections. Barkley served 59 days. He was the answer to yesterday's trivia question on the Political Junkie segment on NPR's Talk of the Nation.

Carl's question is interesting. The Senate Historical Office, when queried about the shortest Senate tenure in history, lists Rebecca Felton of Georgia, who was appointed in October of 1922 following the death of Sen. Tom Watson. Felton, 87, was the oldest person ever appointed to the Senate, the first woman, and -- according to the Senate office -- served in the Senate for just one day. That is, President Warren Harding called the Senate into a special session in November. Felton gave a brief speech on Nov. 21, 1922 -- predicting, interestingly, that many more women would eventually come to the Senate -- and then gave up her seat to Walter George (D), who had been elected to the seat earlier in the month.

But while Felton only served in the Senate for a day, she was actually in office from Oct. 3 until Nov. 21-- seven weeks. Not the shortest tenure.

And that title might go to New Hampshire's Louis Wyman. As Alan Fox of East Lansing, Mich., reminds us, Wyman was the GOP candidate in the 1974 Senate race in New Hampshire for the seat being vacated by Republican Norris Cotton. That race, as many junkies might remember, was for the longest time too close to call. Cotton resigned the seat a few days early, on Dec. 31. Gov. Mel Thomson (R) then appointed Wyman to complete the term -- all two days of it (Jan. 1 and 2).

Eventually, the Senate threw up its hands on trying to decide who won between Wyman and Democrat John Durkin. They declared the seat vacant and called for a special election, for September 1975, which Durkin won.