The news makes sense but was shocking all the same.

Sen. Arlen Specter, a liberal Republican from Pennsylvania facing a conservative primary challenge in 2010 that many think he will lose, today announced in a statement he is switching to the Democratic Party. 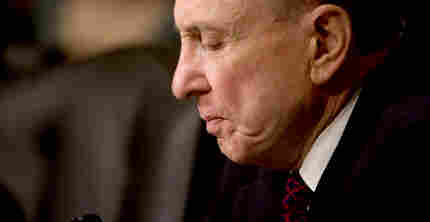 Sen. Arlen Specter, D-PA, sits on the Democratic side of the aisle during a subcommittee meeting on Tuesday, April 28, 2009 in Washington. AP Photo/Evan Vucci hide caption

Here is an excerpt from his statement:

I have decided to run for re-election in 2010 in the Democratic primary. I am ready, willing and anxious to take on all comers and have my candidacy for re-election determined in a general election.

I deeply regret that I will be disappointing many friends and supporters. I can understand their disappointment. I am also disappointed that so many in the Party I have worked for for more than four decades do not want me to be their candidate. It is very painful on both sides. I thank specially Senators McConnell and Cornyn for their forbearance.

I am not making this decision because there are no important and interesting opportunities outside the Senate. I take on this complicated run for re-election because I am deeply concerned about the future of our country and I believe I have a significant contribution to make on many of the key issues of the day, especially medical research. NIH funding has saved or lengthened thousands of lives, including mine, and much more needs to be done. And my seniority is very important to continue to bring important projects vital to Pennsylvania's economy.

I am taking this action now because there are fewer than thirteen months to the 2010 Pennsylvania Primary and there is much to be done in preparation for that election. Upon request, I will return campaign contributions contributed during this cycle.

While each member of the Senate caucuses with his Party, what each of us hopes to accomplish is distinct from his party affiliation. The American people do not care which Party solves the problems confronting our nation. And no Senator, no matter how loyal he is to his Party, should or would put party loyalty above his duty to the state and nation.

My change in party affiliation does not mean that I will be a party-line voter any more for the Democrats that I have been for the Republicans. Unlike Senator Jeffords' switch which changed party control, I will not be an automatic 60th vote for cloture. For example, my position on Employees Free Choice (Card Check) will not change.

Whatever my party affiliation, I will continue to be guided by President Kennedy's statement that sometimes Party asks too much. When it does, I will continue my independent voting and follow my conscience on what I think is best for Pennsylvania and America.

Assuming he votes to organize with the Democrats -- and assuming that Al Franken (D) will become the next senator from Minnesota -- it will give Democrats the 60 votes needed for a filibuster-proof majority.

Specter, appearing on NPR's Talk of the Nation yesterday, had this to say in light of the rumors:

Well, it is true that the polls are bleak. When I voted for the stimulus package, one of just three, and was in position along with Sen. Snowe and Sen. Collins, to provide the decisive votes, there was a very strong adverse reaction. There was a resolution filed in state committee to censure me. The state chairman and the national chairman said they didn't know if they could support me. My office was picketed. And it's a tough proposition. I've overcome challenges before, and I'm working on a game plan.

We now know what that game plan turned out to be.

In his early political career, Specter was a Democrat, but he switched to the GOP to run for mayor of Philadelphia in 1967 against incumbent Democrat James Tate. Specter then ran, and lost, in subsequent races for district attorney, senator and governor (in GOP primaries) before winning the Senate seat in 1980.