On This Day In 1990: Lawton Chiles Trounces Bill Nelson In Florida Comeback

On This Day In 1990: Lawton Chiles Trounces Bill Nelson In Florida Comeback 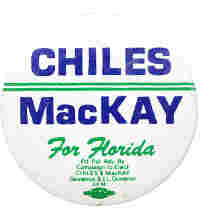 The Democratic primary for governor of Florida turns into a rout, as former Sen. Lawton Chiles clobbers Rep. Bill Nelson with nearly 70 percent of the vote. Attacks by Nelson on Chiles' ethics and mental health clearly backfired.

Chiles will go on to defeat Republican Gov. Bob Martinez in November. He will barely win re-election in 1994 over future First Brother Jeb Bush. Nelson will rebound by getting elected senator in 2000. And Bush himself will win the governorship for the first of two terms in 1998, defeating Chiles' lt. gov., Buddy MacKay.

Today in Campaign History is a daily feature on Political Junkie.